Last month, I received an email from a source named "Rainbow Frozen", who had no interest in sharing with me his (or her) real name.

This person was warning me about the next LAPD Police Chief pick:

Wanted to make you aware of the current precipice Trump supporters (and all Republicans) in the city of Los Angeles are teetering on: the very real possibility that Deputy Chief Arcos will be the next Chief of Police.

His opinion on "Trump" and "Trump supporters" is unmistakable... contrary, antagonistic and disrespectful. In this youtube video, published on 4/21/18, at the 8:06 mark, he very clearly makes his opinion known while speaking about preparing for May Day: "facilitating everyone's voice, even the pro-Trumpers that come out, we're gonna give them their little spot, all 10 of them, and all 10 of them bring a bull horn so it sounds like they have a lot more people than they have" where then his audience laughs. 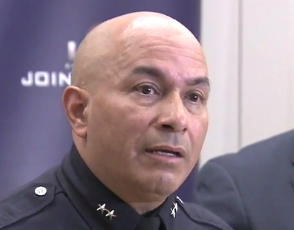 Deputy Chief Arcos is one of the top 3 candidates forwarded to Mayor Garcetti by the Police Commission*. Should he become Chief of Police, the writing on the wall is clear: Trump supporters better get used to having a "little spot" on the side! And yet, according to him, when asked his opinion on Black Lives Matter: "they bring up important issues...."! (21:56 mark)

I'd love to hear about a protest or picket line at City Hall to let Mayor Garcetti know that Deputy Chief Arcos doesn't represent all Angeleno's before he is selected as the new Police Chief... yes, even if it is only 10 of us. I've checked your facebook page and didn't see anything regarding the selection of the new LAPD Police Chief.  Is anything planned? Perhaps this youtube video should be shared on your facebook page?

The last thing that anyone needed for Los Angeles was a disrespectful police chief who didn't believe equity before the law!

The writer then shared the following links with me to warn me about Arcos.

Now for the good news.

The new police chief is someone else, and I may not look his stance on every issue, at least he sounds like someone who is fair.

LOS ANGELES (CN) – Mayor Eric Garcetti selected Michel Moore to head the Los Angeles Police Department Monday, a veteran of the force and a crime statistics expert who says he wants to build trust between police and communities. 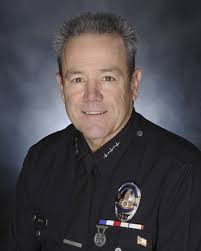 OK. We all know what that means, right? This pick is not interested in enforcing immigration laws. Of course, since 1979, Special Order 40 has precluded those efforts. Wouldn't it be nice to have elected officials who cared about protecting citizens?

At a crowded press room in the mayor’s office, Garcetti described Moore, 54, as “one of if not the most qualified law enforcement professional in America” who doesn’t need to hit the ground running because “he is already running.”

The mayor told reporters he’d only made his decision early Monday and called Moore shortly after to offer him the position.

Moore – who was passed up for the same job back when he applied in 2009 – said he wants to build on the accountability and technological reforms initiated in recent years by his predecessor Charlie Beck, who is set to retire June 27.

Why did Charlie Beck get the job in the first place? That police chief thought it was acceptable for illegal aliens to get drivers licenses and to live "freely" in Los Angeles. Also, the chief did nothing about the bootleg sellers along the sidewalks in MacArthur Park. When will the representatives of our cities stop this corruption?

Hector Villagra, executive director of the American Civil Liberties Union of Southern California, said Moore must expand the “humane” policies he has previously developed with the group.

“The new chief must commit himself and the LAPD to working collaboratively with all the communities of Los Angeles to address vital issues including completely disentangling the department from federal immigration enforcement and limiting dragnet surveillance,” Villagra said. “Moore, if confirmed, must also adopt de-escalation policies, reform gang enforcement practices and increase transparency and accountability around officer misconduct.”

The ACLU only cares about illegal aliens. Since when do criminals count as a "community"?

When asked about SB 54, the state’s so-called Sanctuary State bill that limits police collaboration and interaction with immigration enforcement agencies, Moore said “the LAPD will respect the dignity” of every resident.

“An individual’s immigration status doesn’t matter to us,” he said. “We will concern ourselves with public safety.”

Moore gave a non-answer. I guess that's the best we can hope for going forward.

Garcetti hailed Moore as a reformer and a “rethinker” at the center of the department’s recent challenges.

In recent years, Moore has been at the center of the Los Angeles Police Department challenges around police shootings, immigration and corruption. He took over the reins at the Rampart Community Police Station after a corruption scandal overshadowed the force in the 1990s.

Moore said he wanted LAPD personnel to know they could “step forward” to address challenges in policing and offer ideas and innovations.

Opposing corruption is good, but we still have this problem: "Who will watch the watchers themselves?"

This chief of police candidate is focused on public safety, and he kept it as simple as that. Let's see what happens going forward. From what I have read so far, he doesn't sound like a political ideologue. Let's hope that conservatives, and Trump supporters in particular, will be able to stay safe and show our love and support for our President in public demonstrations in the years to come.
Posted by Arthur Christopher Schaper at 8:40 AM