After the Singapore summit between President Trump and North Korean Dictator Kim Jong-un, CNN news (?) anchor Chris Cuomo interviewed Dennis Rodman. Rodman had served as a de fact private citizen-ambassador to North Korea five times. He developed a friendship with the brutal Stalinist dictator, and that day he saw his efforts finally bearing out a slow but steady détente. The celebrity sensation, both on and off the basketball court, was sporting a MAGA hat, and was the ideal draw for a network which can’t even make into the Top 25 ratings. 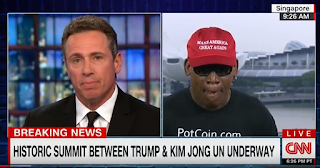 Two things stood out from that interview, and it’s about more than another step toward a denuclearized Korean Peninsula. About President Trump, Rodman shared: "Trump would understand that the people of North Korea have a heart, they have soul, charisma, and they love each other.” Then Rodman commented that the previous President rebuffed Rodman’s interest in de-escalating tensions on the Korean Peninsula: “Obama did not give me the time of day. He just brushed me off.” Rodman then broke down in tears, so moved to see President Trump accomplish something which the player had believed could happen, yet time and again faced rejection from previous leaders who refused to do anything about it.

Think about it. The first black President didn’t listen to a black celebrity sports player who had taken some steps toward peace in the Koreas. In contrast, President Trump, who has been routinely vilified as a racist, elitist, unfeeling tyrant, not only listened to Rodman, but took the necessary steps to bring Kim Jong-un to the table. Trump is not just a political genius, exploiting the corrupt media while driving the political establishment crazy. He’s more than an engaged populist. He shows heart, he esteems the opinions of other people. His particular regard to the concerns of black Americans, both famous and common, deserve greater recognition.

During the Presidential election, Trump told black voters in Dimondale, Michigan: You might as well vote for me. What do you have to lose? He didn’t toss out this idea to suggest that black voters should resign themselves to casting a ballot for someone else besides a Democrat. He visited Flint, Michigan to address the water crisis. He met with black church leaders in Detroit. He reached out to all types of voters on a variety of issues. Black ministers and civil rights leaders came out for the President, too.

Some critics will contend that Trump’s outreach to black communities is surface-level. The local press mocked Trump when he pointed to one of his black friends at a California rally, for example. On Election Day, the general turnout was higher in key battleground states. In California, historically black communities like Inglewood, Compton, and even Oakland voted in higher numbers for Trump than they had voted for Romney in 2012. Trump’s opposition to illegal immigration and bad trade deals (with an emphasis on bringing back manufacturing jobs) probably resonated strongly with black voters.

Once elected, his connection with black Americans, in the media and in policy, expanded. He invited Bishop Wayne T. Jackson of Great Faith Ministries in Detroit to speak at his inauguration. He hosted a business roundtable with black business leaders. These steps are credible and worth recognizing, but is that enough? Trump’s policies have ensured that black voters have not only had nothing to lose, but now they have gained so much. Black unemployment is at its lowest ever on record. Read that again if you missed it, especially since the media has no interest in reporting this Republican President’s effective outreach and achievement for black Americans. Trump’s Secretary of Education, Betsy DeVos, is pushing school choice, vouchers, and independent charters. She has not been bullied by regressive leftists union forces or social justice warriors on college campuses, either.

Recently, pop musician and social media mogul Kanye West came out for Trump, sporting a signed MAGA hat, followed by photos with his producers to show his support for President. Kanye mentioned the “Dragon Energy” connection he shared with Trump, too. The President’s favorable with black males doubled within one week. 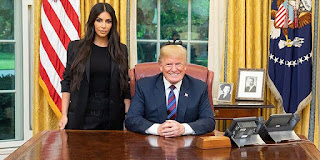 Then Kanye’s wife Kim Kardashian-West visited the Oval Office. The President’s meeting with the wife of Kanye was more than a shallow photo-op, but a meaningful discussion about prison reform. Then Kim West asked Trump to pardon Alice Marie Johnson, an Alabama grandmother serving a life sentence for drug trafficking. Trump issued the pardon for her. He also issued a posthumous pardon for black boxer Jack Johnson. Despite the silent from the black political establishment, President Trump has done incredible things for black Americans.

In light of these events, one has to wonder: Where was Obama? Why didn’t he bother listening to these black Americans, let alone follow on their suggestions? Trump connected with Kanye West. He took Rodman seriously enough to listen and even congratulate Rodman on his efforts. Trump’s down-to-earth regard for American citizens in general, and his growing rapport with pop icons like Kanye, reflect on the broader political shift in this country. More Americans, especially black Americans see a President who does have their back, who cares about what they care about. He is even taking on the reforms which Democrats paid lip-service to for decades (like prison reform, school choice, economic growth, stopping illegal immigration) but did nothing once in office. 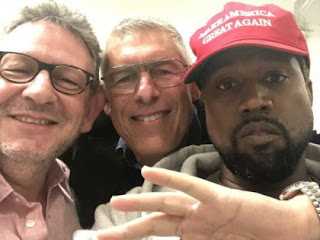 In the first line of his track “Ye vs. the People,” Kanye raps: “I know Obama was heaven-sent, but ever since Trump won, it proved that I could be President.” True leadership is about more than inspiring awe; it’s about lifting others up, appreciating them for doing great things and taking their advice. Trump’s summit with Kim Jong-un is historic, not just for taking steps toward peace and prosperity, but also for the growing rapport which Trump has developed with black Americans, both famous and commonplace. Even CNN had to feature this slow transformation overtaking American politics for the better.