When I read it on the program for the Latino Summit at UC Riverisde, I almost did not believe it.

Yet there the name was clearly printed: Luis Nolasco.

This event took place about two weeks after We the People Rising busted up Rialto city councilman Rafael Trujillo's brazen, fraudulent attempt to turn the city into a sanctuary in defiance of federal law.

Boy, was he surprised when we showed up!


Of course, Nolasco intended to come to Trujillo's defense at the meeting:


He did not mince words about his stance on sanctuary cities, and the proper place for "white people":


He pushed in everyone's face that he was a real reasident of Rialto.

Then he went on and on about "due process", the pushed the fraud that illegal aliens can claim the same rights as citizens claim in the United States Constitution.

He targeted the "white minority".

Then he claimed that "they probably have five years left."


The Daily Caller didn't pass this up:

When confronted with this report, the ACLU issued the following statement:

“Everyone in America has a Constitutional right to free speech, and the employees of the ACLU of Southern California are no exception. However, we wish to make clear that Luis Nolasco was not speaking on behalf of the ACLU at the Rialto City Council meeting and his statements are not consistent with our stated policy. Nevertheless, we support his right to freely express his personal opinion to his elected representatives.”


Then guess who I saw at the De Leon Brown Power summit in UC Riverside? 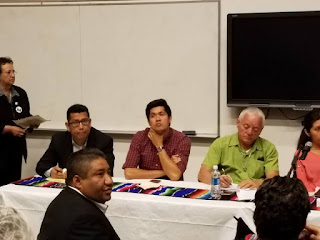 He was not comfortable. I called him out on the rude, racist remark he had made in Rialto four months prior.

Here are his comments:

As he should have been!

He discriminates against men and women who have lighter skin than he.

Instead of fighting for the civil liberties of all men and women, he wants to favor illegal aliens while ignoring the rule of law and dismissing the natural rights of all Americans.

Then he attends this Latino/Mexicano Brown Power town hall to instruct more people how to evade capture and violate the United States' immigration laws.

The American Civil Liberties Union should be ashamed of themselves.

Judging from the video clip above, Nolasco was ashamed of himself, caught in the firing line of agitating conservatives fed up with the one-sided demands for racial equality.
Posted by Arthur Christopher Schaper at 9:15 PM