Melchizedek and the high priesthood of Christ Jesus remains one of the most neglected subjects in modern Christendom. I had read about the role of the high priest here and there, but no one taught me how Jesus is my high priests and serves forever.

Because few pastors explain the worship and sacrifice functions of the priest in the Old Testament, it's very difficult to appreciate Jesus' service as our High Priest.

Today, though I wanted to explore a question that seems academic, but in the long-run has greater value for us as we grow in grace and knowledge of the Lord Jesus.

Is Melchizedek, the King of Salem who appears in Genesis 14, a pre-incarnate appearance of Jesus Christ, or is he a type and shadow in the Old Testament who points to Christ Jesus?

I submit that Melchizedek is a type, but is not an actual appearance of Christ Jesus.

"17And the king of Sodom went out to meet him after his return from the slaughter of Chedorlaomer, and of the kings that were with him, at the valley of Shaveh, which is the king's dale. 18And Melchizedek king of Salem brought forth bread and wine: and he was the priest of the most high God.

"19And he blessed him, and said, Blessed be Abram of the most high God, possessor of heaven and earth:

"20And blessed be the most high God, which hath delivered thine enemies into thy hand. And he gave him tithes of all." (Genesis 14: 17-20)

The first reason that I suspect that this is not an appearance of Christ Jesus Himself is that Melchizedek does not tell Abram to bow down to him or take off his shoes, as the Angel of the Lord told Moses then Joshua would do later in the Old Testament (cf. Exodus 3:5, Joshua 5:15).

Second, the prophecies about Jesus in connection with Melchizedek refer to Jesus as priest forever after the order of Melchizedek, but not as Melchizedek himself:

"The LORD hath sworn, and will not repent, Thou art a priest for ever after the order of Melchizedek." (Psalm 110:4) 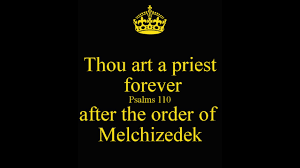 "9And being made perfect, he became the author of eternal salvation unto all them that obey him; 10Called of God an high priest after the order of Melchisedec." (Hebrews 5:9-10)

Jesus was called to be a priest. That means he had not become one yet, unlike Melchizedek, who was already priest and king. During His earthly ministry, Jesus served as prophet. He is now our priest, and He will come again as king.

Now, the passage in Hebrews 7 gives the impression that the priest of God Most High in Genesis 14 has the same divine quality as Jesus.

"For this Melchisedec, king of Salem, priest of the most high God, who met Abraham returning from the slaughter of the kings, and blessed him; 2To whom also Abraham gave a tenth part of all; first being by interpretation King of righteousness, and after that also King of Salem, which is, King of peace; 3Without father, without mother, without descent, having neither beginning of days, nor end of life; but made like unto the Son of God; abideth a priest continually." (Hebrews 7:1-3)

The Biblical record does not inform us about this king's lineage. We have no record of his parentage, true. That does not mean, however, that we behold Jesus in a pre-incarnate appearance here in the passage.

This verse affirms that Melchizedek, according to the writer of Hebrews, was not Jesus Himself.

He points out again that Jesus serves after the order of Melchizedek, not as Melchizedek himself:

"15And it is yet far more evident: for that after the similitude of Melchisedec there ariseth another priest, 16Who is made, not after the law of a carnal commandment, but after the power of an endless life." (Hebrews 7:15-16)

Melchizedek was indeed like the Son of God. In the brief description of this priest, we learn a lot about Jesus. 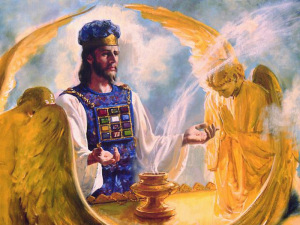 His name means "King of Righteousness."

He came from the city of Salem, which means "Peace."

He brought with himself bread and win, representing the communion, by which every Christian celebrates the death and resurrection of Christ Jesus through His body and blood.

However, this royal priest is not Jesus, but a type of Jesus, for our Savior serves today according to the Priesthood of Melchizedek!

Why does this matter?

Accurate attention to Scripture is essential for us to grow in grace (2 Peter 3:18).

Whenever we read the Bible, especially in the Old Testament, we want to make sure that we don't read revelation of Jesus into any passage, person, or figure where the verses and the context do not justify that rendering. Moreover, we want to invite every believer in Christ Jesus to see more of our Savior, God's Beloved Son.

Last of all, we see Jesus as a humble servant, even though he was not robbing God the Father of any glory by being equal with Him (Philippians 2:6), that He took on a this new, powerful office on our behalf when He died on the Cross.

Before the Cross, Jesus Himself could not be our priest. The first priesthood through the tribe of Levi was established by God through Moses. We need to appreciate that Jesus fulfilled the law, every part of it, including the office of priest and introduced a totally new priesthood by His death, resurrection, and ministry on our behalf at the right hand of God the Father (Romans 8:34).

Nowhere in the Genesis 14 account do we read anything about Melchizedek sitting down, either, and that's important for us to recognize this king-priest as a type, but not the substance.. The work that the king-priest mentioned in Gensis was doing had not been finished yet. With Jesus, the work is done. He shed His blood, offering one sacrifice for sins forever (Hebrews 1:3; 10: 12-14).

When readers recognize that Melchizedek is not Christ incarnate, we can compare and contrast his brief ministry mentioned in Genesis and the Psalms, then enjoy and receive greater revelation of the work, the service which Jesus offers on our behalf today, a perfect sacrifice which allows God's righteousness and grace to flow in us (Romans 5:17)