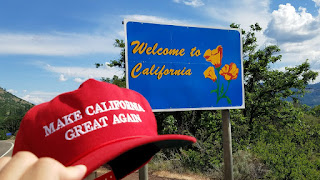 Let's pray that the Spirit of the Lord will touch the hearts of those who are truly seeking His will.  With these new regulations practically outlawing taking showers and so much government overreach and implementation of agenda 21 plans, some people may be inclined to vote more conservative in November.   I think a lot of people were surprised that John Cox overtook Villagosa in the primary.  I know Maxine Waters got over 70% but if Omar can show that he has a plan to improve the employment and living conditions in the inner city he may actually have a chance to make a difference.  Waters has done nothing for "her people" and all she does is ask for impeachment of President Trump and demanding that white people pay reparations.  Just a few thoughts. My choice was Travis Allen who voted for Trump and was willing to work with the President. John Cox, however, did not vote for Trump. Agenda21 housing and illegal immigration will still happen with John Cox who is not a real Republican but I’m suppose to vote for him because he has a (R) next to his name.😳

I was verbally attacked by Cox supporters, that had no business treating me the way they did. Yes, I’m voting for that creep because of Gruesome Newsom, that’s all. He is not a real Republican from Chicago.

Mr. Cox is for Agenda21 housing and illegals working in our fields when veterans and homeless have no jobs. Enjoy the Top 2, because I won’t.

We have to support Cox. Why? Cuz


Gavin Newsom Scares the hell out of me!