About five months ago, a public relations firm reached out to me. They wanted to know if I would be interested in interviewing Bill Ottman, the creator and CEO of Minds.com. 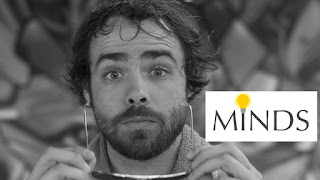 Because I contribute to Townhall.com, the firm thought they could

Minds is a new social media platform to combat the lack of transparency and the essentially liberal bias of Facebook.

I interviewed Ottman for an hour, learning about his background, his investment in the program, his interest in effective competition against the current social media giants who are shutting down conservatives and limiting free speech of all kinds.

There were a few things that I took away from our interview, with the larger portions of the article which I had intended to submit:


Facebook Mines Your Business. Minds Wants to Protect Yours

I wanted to give up Facebook last year, but outreach from supporters across the country induced me to come back. I went live a number of times on my restored Facebook account, along with my back-up account. Then I kept getting banned for months at a time.
Then I was disabled. For good. Honestly, I am glad it happened. Social media is taking up people’s time and resources like never before, and it’s not good.
A fellow Trump supporter shared a sense of relief after his forced vacation from Facebook.
But now it’s nothing but schadenfreude for me. Facebook has been losing users by the multi-millions over the last three months. Post-Millennials are generally turned off to social media. More studies suggest that

This is a new platform, started by Connecticut native Bill Ottman, who attend the University of Vermont. During his undergrad years, he developed a different social media platform: Minds.
One of his chief interests with the platform? He wants a social media site which respects your privacy.

A PR firm reached out to me, offered to have me interview Ottman.

New to the whole social media tech-talk, I asked him to explain “open source”:
“All of our software is publicly available to be inspected and used. It also has to do with content to be shareable.” Ottman also prides his program as seeking ideas from other people. I had suggesting reaching out to Buffer and Hootsuite so that users can share their content on Minds along with other platforms.
In contrast, Google, Facebook, Twitter, --all of them are proprietary software “they give no access to the public what their code is doing. It’s a major privacy issue. Transparency of the software is essential for user freedom and user rights. Otherwise, they could be doing anything to you. Any number of things.”

He predicted the information abuses which Facebook has become notoriously well-known for.
“I knew that that was going to happen, so it was going to be transparent, encrypted for privacy, reward users instead of exploiting them.”

Unlike Facebook, which explicitly requires users to purchase add time to expand the reach of posts and information, Ottman’s program created a points system. Visitors and users to the platform get points, which they can spend to increase the algorithms to share their content.

The free market, the enterprise system of supply and demand is forcing innovation, and bringing in much needed competition against Google, Facebook, Twitter, and the other titans of Silicon Valley. Ottman wants to disrupt the Facebook monopoly.

The same way that Wikipedia disrupted the encyclopedia industry.

The same way that Wordpress disrupted the organization system industry.

People have complained about the dominance of Mark Zuckerberg, comparing their tyranny to the Robber Barons of Gilded Age Post Civil War America. Although the progressive accounts of these corporate firms have been debunked, it is quite true that social media titans have become anti-social in their tyranny. Is the answer more regulation?

You can go to your page, and then click boost “and you can boost your post for a thousand views. We will share that through the community.

Facebook’s algorithm makes it that you can’t reach all of your followers. We want to reward people with more exposure instead of taking it away.

In terms of revenue, users can earn or by these points. It’s our versions. It’s a form of promotion
Now, why did Ottman reach out to me?

“I noticed your articles and that you wrote about Jordan Peterson. He is on Minds. We are dedicated to free speech. There are lots of censorship issues. A lot of content creators are getting banned or demonetized. This has happened.”

As long as you are not inciting violence. We are not going to ban people for their political views. If people are malicious or harassment on the site, but we have a much more free-speech oriented policy. Probably the most liberal free speech content policies out there.

In addition to appearing on Tucker Carlson, Ottman is getting more traction simply because of the purges and refugees from other platforms.

I had to ask about his political views, and I liked what he had to say.

“I honestly try to stay away from labels. I think it’s really important to not politicize. We are certainly a freedom-oriented network. A number of labels could apply to me.” He cited more populist, anti-Establishment types like Dennis Kucinich and Ron Paul.

His reticence to label himself is refreshing, actually, since platform founders have created problems for themselves precisely because of their driven agendas.

“We have created a platform that free speech advocates on both sides of the platform can coexist. A lot of social media platforms are not able to maintain any sense of balance. That’s any specific organization.”

He then brings up a great point about what’s hurting the tech titans:

“Facebook and Google are losing half their audience because they are politicizing their platforms.”
But he brought up other angles:

“I noticed the problems with Facebook right away. One of the original problems I noticed was the negative impact on people’s psychology. They never came off as any kind of transparent. They didn't seem like a down-to-earth company. They wanted to extract value out of users get people addicted. They were conducting psychological experiments on the users. They did a secret mood study. The would inject happy or sad articles into people’s newsfeeds.”

I then asked Ottman what he’s going to do about the growing disillusionment among Millennials?

It’s not so much social media that worries them, Ottman posits: “They are turned off to the narrative, they are getting abused, they don’t resonate with that. They want real connections with people, especially for Millennials, because they don’t know a time without the Internet. They have no experience with being away from the screen. It’s not about being pro- or anti-social media. Most millennials are pro-social media.= -- it’s how people communicate, it’s part of the fabric of our society.

It's time to end the top-down model of social media, and start working from the ground up. Emerging tech companies need to have that conversation with their communities.

Are you developing a counterweight to Silicon Valley?

“Yes, there is a whole movement for decentralized tech, personal currencies emerging. More freedom based platforms. There’s a lot of heat that Silicon Valley is getting. IT’s a similar tone with what’s happening to Facebook and Google, acting in weird group think.”

I asked for his views about regulating social media as a public commodity, just as Tucker Carlson has suggested.

“ I would say that it’s better to need more decentralized solutions as opposed to more government regulations, but it may be a possibility to consider. I think the conversation needs to be had, like with Microsoft. I don’t know the answer on that.”

That’s refreshing! “We want to build an alternative. Get people off them as opposed to worrying about.

“I think there’s a lot of illegal activity that these companies are engaging in. Surveillance, for example. to array of abuses of power. One of the biggest ones was how they drew everyone to their platform, telling everyone that you would be able to reach your target audience. They told all the news sources that they would. These companies paid Facebook millions of dollars, but every six months, they change their algorithm. Now the companies are only reaching 3% of those fans organically. Facebook wants you to pay more to reach the very fan base that your created. They changed the platform all of a sudden. That’s false advertising.

They also comply with rogue states like China – it’s an issue that we will be facing – international law, dealing with laws in countries based on what they think about data privacy. It’s a big regulation in other countries. Then you have speech laws in other countries that are much worse than in the US. They have gone down the rabbit hole of censorship. They have started censoring other people’s content like mad.

What’s the fundamental basis for your commitment to freedom of speech?

I am doing some deep research on this right. The studies show that censorship actually makes hate speech worse. There as a study done by Reddit – started censoring their contented. They analyzed 1 million reddit posts. By censoring content, you can sort of slow down hate speech or racism. But, it makes the larger global problem worse. It will just pop up somewhere else.

It’s called The Toothpaste tube effect, the Streisand effect—and it becomes more popular. People want to know more about it. It infuriates the people getting censored. Our approach – someone needs to be mature enough to deal with this more extreme content, so that in the battle of ideas, the good ideas win on the basis of their own merit.

You’re not just infuriating troubles. There are still blocking and filtering tools
Studies prove that censorship makes the larger rise in extremism worse.

The Streisand effect—She didn’t want something about her on line – she made a big fuss about it – and then everyone was talking about it! She wanted to get rid of the content. This is exactly what happens when people get banned on Facebook – they go to other accounts.
Facebook thinks that they are solving bullying—but they are actually making it worse.

I don’t think that this is specifically a libertarian idea – it’s a classic liberal, libertarian, common ground issue. Even if the Left is being dominated by the censorship narrative. Not everyone on the left really wants this. They are bullying their own side into thinking this.

Twitter was marketing itself as the free speech wing of the free speech party. There are lots of internal struggle in Twitter. A lot of people who wanted to maintain their committee. Twitter has become so inconsistent with their policy, even though there is violent speech coming from the left and right – they only ban certain people. You have to have a principle, whether certain content is offensive to some people.

There is a duty of social networks to have principles and to help maintain a healthy community, but I don’t think that requires censoring legal content. A lot of the feedback that you get – you are not taking responsibility for the content on your site.

Movies getting illegally downloaded – copyright issues. The legal line in the US, that is consistent that people can hold onto. The other sites do not have a consistent policy.

Ultimately, I want to engineer ourselves out of the position --- of potentially being able to get corrected by those subjective decisions We are moving toward cryptocurrency, which is less subject to censorship.

Funny, that the momentum is not slowing doing. The Establishment networks are not taking any cues, getting worse, and we grow more. They are not learning from the consumer feedback. Facebook just had another loss of millions of users.
Posted by Arthur Christopher Schaper at 5:27 PM