Congresswoman Maxine Waters has gotten away with shooting off her mouth for the last thirty years. She has demonized opponents with the race card, and she intimidates communities and community leaders to get along with her program.

She talks a lot about how she "works for her people", but the truth is that she has spent more time making sure that everyone works for her. She may send a form letter responding to concerns from constituents from time to time, but by and large she does not care about her constituents or this country. 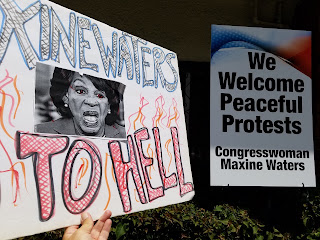 Her latest calls for assaults, harassment, and all-out attacks against President Trump and his staff have gone too far.

Journalist Laura Loomer confronted her in the halls of Congress. Waters batted Loomer away and then rushed into an elevator. The Congresswoman's own liberal colleagues have denounced her rush to violence. Since then, the LA-area political fixture has done nothing to fix the problem but continues to run away from reporters and angry constituents demanding answers.

This time, LA County for Trump had enough, and we decided to take the fight right to her own office, right in 'hood of South Los Angeles. Specifically, her office is located at 10124 South Broadway, in the Broadway Meadows Section of Los Angeles.

I have been to her office once before, but I just took some pictures with my anti-Maxine signs, then left for the day.

This time, we had other Trump supporters with us, and we let her staffers know that we are not afraid of anybody!

This link has the entire video that I recorded on YouTube Live:

The Broadway Meadows area isn't the worst section of Los Angeles, but many of the storefronts are closed, and much of the business along the thoroughfare has fled the region. The high costs, high taxes, regulations, and other government burdens have chased away so much business from the area. The crime, the gangs (both legal and illegal) have driven away so many hard-working people, too.

As we drove up to the area, we saw two police cruisers parked on the street island right next to the Congresswoman's office. Earlier that day, Waters had announced that she was cancelling a number of her events because she had received hate mail and death threats. So, she likes to give it to others, but she can't take it herself. What a surprise.

As soon as we showed up to the door, the owner of the building stood outside, and right then he informed us that we could not go inside. We had to wait for Waters' staffers to step out and speak with us. Immediately, we face off against the same stupid game that these liberals play. First, they set up their offices in private buildings in order to limits visitors and petitions from constituents, then they find ways to limit the means by which citizens can register their complaints and their grievances. 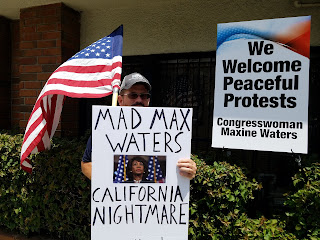 The two staffers who "agreed" to meet with us outside stood in the doorway nearly the entire time. They expected us to fill out a form and write out our outrage with the Congresswoman. No way! We let her have it. The staffer was very condescending. She refused to provide us a place to sit within Waters' office. All of us shouted that Waters needed to apologize, and that she hasn't passed any real legislation to help her community in the thirty years in which she has taken up space in Congress.

At one point, when I called out the Congresswoman for accomplishing nothing in office, the staffer laughed at me, as though that were funny. The rest of us let her have it, and then she had the door shut in our faces. Outrageous!

Then things really started to heat up. A few Hispanic women were driving down the street, and they started yelling at us. One of them flashed gang signs at Harim. They started shouting "F--- Trump" and all the rest.

The most interesting encounter occured when Stacy, a black lady living two doors down from Waters' office, came out to see about all the noise. At first, she was very hesitant and even upset with all of us. Then we started talking about how all the illegal aliens are pushing out black voters, black homeowners in the region. When she realized that we were on her side, she started parading and protesting with us! 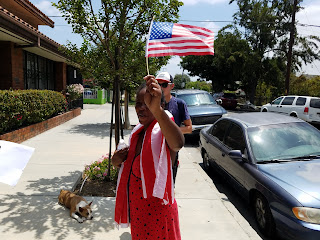 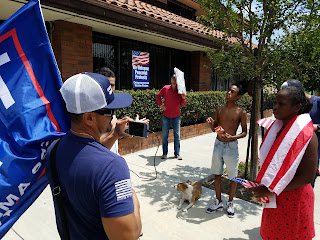 Another guy, dressed all in black, was recording us the entire time. We called him out on the all the stuff that the Congresswoman has been doing for herself, while she has done nothing for her constituents. We later found out that that man worked for the Congresswoman and was simply reporting on us. During our protest outside, he got in the face of my friend Perry, and he pushed the camera man back. It could have gotten really ugly really quickly, but the police stepped in and separated the two. The officers told the camera man to cross over to the other side of the street. 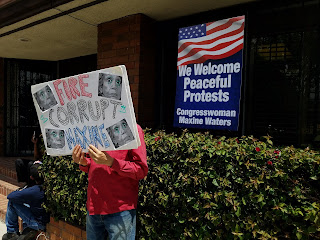 We protested for another half an hour. Another woman drove by with her mother and she began yelling at us. Her parents came from El Salvador, and they came into the country illegally. Today, her parents and the rest of the family are legal residents, she told us. We tried to explain to her that we can't have a country if illegal aliens are overrunning our borders. The race issue came up a number of times, and we often had to assert and reaffirm that the fight against illegal immigration has nothing to do with race. She was willing to listen to me and other, but she was still very upset with President Trump.

Ten minutes later, another black man named Drew came walking down the street. He was not happy with Maxine Waters at all, and he wanted to know more about Omar Navarro. In fact, we connected with two constituents to get them to oppose Waters for re-election. The worst part about it all?
I told them what the Congresswoman had said to me: "The illegals are here to stay." She said exactly that to me when I confronted her in her Washington DC office last September. Stacy was furious when she heard that, and so was Drew. 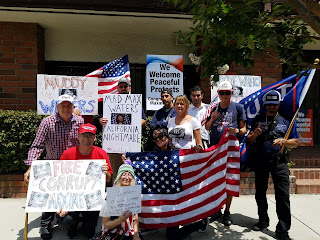 I had informed so press agencies that LA County for Trump was going to be protesting at Maxine Waters' office for her abusive behavior and negligence toward her district. They didn't make it in time, since we couldn't go into her office, and there was little else for us today.

Fox 11 News did inform the public about our protest, though:

The group “LA County for Trump” tells me they peacefully protested outside of Maxine Waters’ LA office today in response to her “hostile, hateful rhetoric” regarding the president and his associates/Cabinet members. @FOXLA pic.twitter.com/kpzfuOFvM3
— Bill Melugin (@BillFOXLA) June 29, 2018