Greg Aprahamian lives in CD-25, which is represented by Congressman Steve Knight.

He just signed off on the discharge petition which would push for a floor vote on immigration bills, including blanket amnesty with no enforcement. All of this force-vote nonsense is nothing but political theater. There is no way that this legislation gets through the US Senate, and even if it does pass both chambers, it will die on the desk of President Trump.

Trump announced clearly that he wants an end to chain migration, the diversity VISA, E-Verify, and comprehensive funding for the Southern border wall. The amnesty caucus has no interest in protecting our country as much as they want to protect the bottom line of lobbying Big Business interests. This is all wrong. When will our representatives start ... representing us again?!

And that's exactly what Greg and I wanted to do with Congressman Steve Knight. He has promised constituents that he will reject any form of amnesty in a floor vote, but the fact that he wants the legislation to come to a vote is bad news in itself. Anything can happen with a discharge petition, and as members of the GOP leadership have shared, this process gives all the power to the Democratic Party, the minority party, by the way.

Here's Greg's report on what happened on Wednesday:


America Don’t Be Fooled!  The Discharge Petition Is All About Loose Borders And Cheap Labor


On Wednesday June 6, 2018 California Republican voters gathered at Rep. Steve Knight’s Simi Valley office to tell him to get his name off of the amnesty discharge petition.
IMG 0369

When we arrived at the second floor office the door was locked and the office appeared to be closed.  We weren’t fooled by the locked door though,
the building manager had just tipped us off that the office was open and she believed that Steve Knight was in.  While outside the office, we also saw the door knob jiggled from the inside.

I have to admit that It must be tough for a Republican Congressman to be forced to hide from Republican voters and pretend to not be in, but vice versa it’s also tough for Republican voters to have to keep fighting the same amnesty battle over and over again, it’s tough that they never seem to listen or learn.  It’s tough that we have to out maneuver the money interests that profit from amnesty and open borders, and It’s tough that we have to stay on top of this issue.
The pro amnesty politicians are  getting paid handsomely to promote amnesty, and we are forced to utilize our precious time to try and stop it.

Just for the record, we’re not fooled by the discharge petition and this attempt at amnesty and  neither should you.

Until next time,
Greg Aprahamian

First, it frustrates me how difficult it is to get working people to show up and slam their representatives when they do not represent them. Of course, we can't all be anywhere at any time since people have to work during the day. Perhaps Congressmen should start having office hours at night-time ...

I recorded my own live video:

As soon as I arrived, the rest of our team on site told me that the office building manager was outside complaining about us. We told her that we had every right to petition our government for a redress of grievances, and therefore we were not going to be deterred or intimidated.

As we walked up the stairs to Knight's Simi Valley office, Greg told me that Congressman Knight was in the building. At least that's what they officer manager had told him. Like many Congressmen, Knight's office was locked on us with a camera button on the door for those who wanted to enter. We heard the door handle jiggle a little bit, too, proving that people were in the office.

I forgot to mention that we had arrived at 1pm. Staffers are supposed to be running the office at this time, aren't they? Once again, We the People face closed doors and non-answers from our representatives. When can we petition our government for a redress of grievances, then? 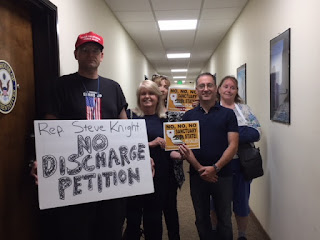 Despite all assurances, I am not happy with Knight's decision to sign off on any kind of petition. We need all representatives to put the needs of American citizens first. There should be no DACA, no amnesty, no open borders proposals or agendas of any kind.
Posted by Arthur Christopher Schaper at 8:59 AM