Ammon Bundy, the Abusive Federal Government, and the Fight for Our Rights

Last month, the Siskiyou County (one of the northernmost in the state of California) Republican Women Federated and Yreka Tea Party invited me a second time to their wonderful State of Jefferson. The people there really care about our country and the state of California, but most importantly they will stop at nothing to protect their rights.

They wanted me to hear Ammon Bundy, their featured guest speaker for May, 2018. I was privileged to meet him, one of the sons of Nevada rancher Clive Bundy. The Bundy family went national--even international--because they stood up to the overbearing federal government, particularly under the oppressive Obama Administration. For my report on the Bundy Family' victory against the Bureau of Land Management in Nevada, click here. Ammon Bundy has not relented in taking on the federal government's overreach, especially against farmers and ranchers. Here's the entire video of Ammon's speech to the GOP Women Federated Group. 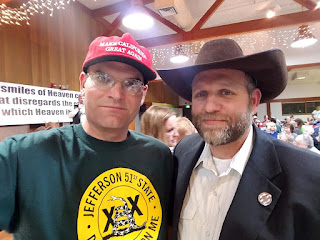 The Bureau of Land Management had been chipping away at the rights of cattle ranchers throughout the Nevada territories for decades. They would separate grazing and water rights, then the feds would lay on more rules and regulations. In order to gain ownership over the land, the Bureau of Land Management would have the farmers and ranchers in the region sign off on contracts to assert older claims, yet within those contracts were written numerous stipulations, exceptions, and expectations.

When land owners would run awry of even one little law, their land would then face seizure, or the ranchers would have to settle and sell.

Clive Bundy was the last rancher standing, so to speak, in Nevada, a state where the vast majority of the property still belongs to the federal government. When the Bureau of Land Management showed up to try to push Clive and the rest of his family off their land, they stood their ground. In spite of the massive military presence and unlawful seizure from the federal authorities in the region, The Bundy family made their fight massively public.

Within 24 hours, supporters from all over the country arrived on scene with firearms. The people one, and the federal agency had to back off.

Like a growing number of outraged and overwhelmed farmers, Bundy is taking a stand against the federal government's incessant overregulation and land-grabbing. First, he stood his ground with the rest of his family to save their ranch against the Obama Administration.

He then joined with farmers in rural Oregon to restore their private property, which had been unjustly seized for a national park. If anyone has been following President Trump's latest actions, he has been restoring state and local sovereignty over public lands. It started with the Hammond family of Harney County, Oregon. They faced outrageous terrorist charges just for a prescribed burn on their own property which ended up burning a little property on a federal wildlife refuge right next door.

Just like what happened in Nevada, the Feds had engaged in unjust, unlawful, unconstitutional land takings to build up a federal wildlife preserve. Ammon Bundy read about what happened, researched the federal and constitutional law on the matter, then joined with the residents of Harney County to reverse the unjust land takings. Following the common law precedents about adverse possession and perfecting private property titles, Bundy led a group of residents to go to public lands in the region and reclaim it for the Harney County residents.

This process so alarmed the FBI and elected officials around the state. Federal officials were even intimidating Congressmen in the region to back off. We the People. Despite these heinous tactics, Bundy with  other ranchers in the area and began restoring local control of the region. Bundy was well-regarded for his efforts. His stance to protest within the Malheur National Wildlife Refuge inspired many around the country. First responders and veterans arrived on scene to show their support. One veteran gave Bundy the Bronze Star he had earned while in active duty.


Another man gave Ammon the American Flag which had shrouded the burial casket of his fallen veteran brother:


Why did these men give Bundy such prized possessions of honor? I submit that they wanted to show what appreciation they could for Bundy's brave stance for the rights of all Americans. He was exercising the rights which these men fought to preserve and enhance. Bundy's legal fight against the lawlessness of these federal agencies demonstrated to the First Responders and America's veterans that there are still good men out there who are using what they had fought for.

In spite of his brave and legal efforts in southeastern Oregon, he was arrested and even placed in solitary confinement. For two years, he suffered not just unjust incarceration, not just painful separation from his wife and four beautiful children, but incessant abuse from prison guard and inmates. They stopped up his ears once and blew out his eardrums, for example. There other abuses he suffered which I will not detail at this time. The point remains that the fight against the abusive federal government is rule. The corruption of the Deep State in Washington DC affects everyone, not just President Trump and his staff our elected officials trying to get to the bottom of the Swamp Rot.


For decades, the federal government has seized property or claimed public or non-owned property without constitutional authority. Bundy said "Enough", and more people around the country are teaming with him. During my private discussions with Ammon, he frequently referenced the United States Constitution. Nowhere does the federal government have a right to take property and transform it into national parks under strict rules and regulations.


Our federal government has declared war against farmers and ranchers: men and women, the farmers and ranchers who till the land, who raise livestock to our general benefit. These abuses have not stopped Ammon and a growing contingent of farmers, growers, harvesters, men and women who trust in God's goodness and refuse to relinquish their God-given rights. "You fight for your rights where you are, not in a courtroom," he told the Siskiyou County audience. Indeed.

Bundy was not afraid to point out the source of rights. They do not come from the state, they do not come from other people. We are created in God's image, and from Him we receive our authority, our ability, our prosperity. Ammon Bundy's struggles and victories must be told, but his courage must be emulated. We can't Make America Great Again until We the People demand that the government at all levels becomes constitutional again.
Posted by Arthur Christopher Schaper at 11:39 AM