Then again, the Washington (Com)post probably realizes that all this anti-Trump animus is only helping the President, his supporters, and their agenda.

OVER THE WEEKEND there was a fair bit of argument about the decision by a small restaurant in Lexington, Va., not to serve dinner to President Trump’s press secretary. It wasn’t the first time recently that strong political feelings have spilled into what used to be considered the private sphere. We understand the strength of the feelings, but we don’t think the spilling is a healthy development.

"Fair bit" is fairly off. This discrimination is unjust and needlessly divisive. Granted, any private establishment can choose whom they choose and do not choose to serve, but prospective customers locally and nationally can choose not to go there--and they can inform others not to go there, either.

Sarah Huckabee Sanders was dining with a few other people at the Red Hen in Lexington Friday night. Several of the restaurant’s staff are gay and objected to Ms. Sanders’s defense of Mr. Trump’s discriminatory policies against transgender people. The staff also objected to the administration’s recent actions leading to the separation of thousands of children from their parents at the U.S.-Mexico border. Respecting her staff’s wishes, the restaurant owner politely asked Ms. Sanders to leave, and Ms. Sanders politely acceded. She then tweeted about the episode, turning it into a public controversy.

Actually, she didn't dine at the Red Hen. She wasn't allowed to since the owners and the staffer took a vote to have her leave. Notice that the "gay" people working at the restaurant wanted her to leave, too. Where's the tolerance? I thought that "Love Trumps Hate". For the left, tolerance has never been a two-way street. Ever.

This followed by a few days the very public heckling of two architects of that border policy, Homeland Security Secretary Kirstjen Nielsen and White House senior policy adviser Stephen Miller, at Washington restaurants. Last month a Nebraska sociology professor was found guilty of vandalism for spraying false blood at the home of a National Rifle Association lobbyist in Alexandria.

The violence of the left, but I repeat myself. The whole "left-wing" ideology is predicated on violence instead of voluntary exchange of ideas. The left-right dynamic emerged during the French Revolution. From the Jacobins to the Robespierres to his sick followers, violence played a large role in their political economy. Use force at every turn as an appropriate means to demand fulfillment of their radical vision of equality.

It’s not a new tactic for protesters of one sort or another to target a public official’s home or private life. But never-at-rest social media have blurred the line between work hours and private time. Cellphone cameras make it ever easier to intrude and broadcast.

Private time, private life, and a general lack of privacy also defines the left. They don't know a difference between civilian, secular living and political activism. Like radical Muslims enforcing Sharia over aspect of life, these insane anti-social injustice warriors will to go every length possible to shut down dissent.

They are in full derangement mode only because they know that they are losing the fight, and even the crappy, corrupt lamestream media cannot help them.

Most obviously, passions are running high. Those who defend the Red Hen staff, or Ms. Nielsen’s hecklers, say this is no ordinary policy dispute. Mr. Trump has ordered terrible violations of human rights at the border, he is demonizing immigrants by his actions and his rhetoric, and people need to speak up however they can.

There is nothing terrible or horrific about the orders to secure our borders and protect American sovereignty. This is beyond ludicrous, delusional, laughable. Even though this editorial is supposed to defend Press Secretary Sanders, the writers will still fight against Trump.

They will get no argument from us regarding Mr. Trump’s border policy, and when it comes to coarsening the debate, he is the prime offender. The poisonous fruits could be seen, as it happens, Saturday morning in a vile tweet from Ms. Sanders’s father, former Arkansas governor Mike Huckabee, that associated House Minority Leader Nancy Pelosi, a California Democrat, with the vicious MS-13 gang.

President Trump is not the offender. The Red Hen owners are the henpeckers who snubbed Sanders and family.

We nonetheless would argue that Ms. Huckabee, and Ms. Nielsen and Mr. Miller, too, should be allowed to eat dinner in peace. Those who are insisting that we are in a special moment justifying incivility should think for a moment how many Americans might find their own special moment. How hard is it to imagine, for example, people who strongly believe that abortion is murder deciding that judges or other officials who protect abortion rights should not be able to live peaceably with their families?

Good question. Abortion is murder. Protecting our borders from murder is a life-affirming action to ensure that our nation survives into the future.

Down that road lies a world in which only the most zealous sign up for public service. That benefits no one.

During the 2012 Election primary, Newt Gingrich sharply criticized John King for bringing up the trashy ABC interview with his second wife about an open marriage proposal. He slammed the destructive, vicious nature of the media, which has made it more difficult to governor the country and made it harder for good people to run for office. Who wants to put up with the 24-7 relentless abuse of mad mob crowds looking to damage people's life, property, and reputation--all in the name of social protest. 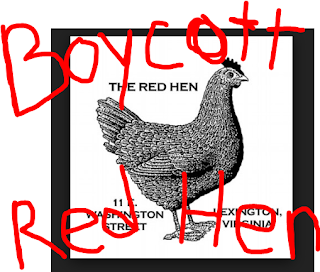 I am not sure that the answer to this increasing conflict is to force businesses to serve everyone. I do believe, however, that conservatives need to keep up the fight of "punching back twice as hard." These people on the left will never learn until they fully absorb the consequences of their disastrous policies. These private establishments think they can bully and pick on people who don't agree with them? How will they like it if it's done to them?

And that is precisely what is happening. Donald Trump has provided the cover and the example for everyday people to follow in fighting back against the corrupt and the evil Deep State of Washington DC. Sarah Sanders handled the abuse against her very effectively. She was not rude, but she did expose the rude, abusive behavior of the restaurant. People around the country had responded accordingly.

Posted by Arthur Christopher Schaper at 11:31 AM