President Trump is Right: The Fake News Media, Not North Korea, is Our Greatest Enemy

No one believed that such a thing was possible, and the American media isn't impressed, either. For years, I didn't pay attention to the North Korean brouhaha, since I wasn't worried about a third-world failed narco-state doing much more than talk, despite all the bellowing about North Korea's nuclear capabilities.

President Trump's timed, well-placed foreign policy actions, hard power and soft power, have worked out to bring the two Koreas together, to bring an official to the Korean War.

This picture captures the new spirit overwhelming the peninsula long fraught with instability and brinkmanship: 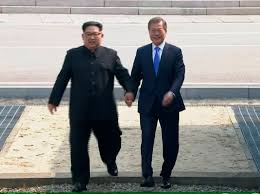 The South Korean President Moon Jae-in and North Korean dictator Kim Jong-un embraced, guided each other into their respective countries within the militarized zone. They planted trees together, exchanged a few words while dining together.

Check out this photo-op of their historic meeting: 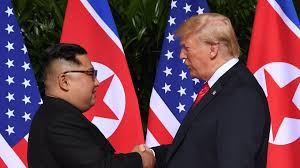 President Trump established an expectation of respect and honor from the dictator. When he strayed away from tactful diplomacy, Trump would back away tentatively from a scheduled summit in Singapore. When North Korea's representatives restored a tone of honor toward the President and his diplomatic corps, the meeting returned to schedule.

Trump has accomplished a great deal on the world stage. He has bombed "the hell" out of ISIS. His military directives have led to the utter wiping out of Taliban holdovers in Afghanistan. Where three Presidents had failed, Trump succeeded and brought the United States embassy in Israel from Tel Aviv to Jerusalem.

He ripped up President Obama's failed Iran Deal, then refocused the United States' efforts to impose sanctions against the Islamic theocratic tyranny in the Middle East. The Iranian people are rising up again against this untold tyranny. This time, the Persian protesters have an ally in the White House. The President has racked up an incredible list of victories in the last 500 days.

The media have remained silent or have said damning, untrue things about the President, his family, his efforts, etc. Instead of recognizing the efforts of President Trump and his executive cabinet, the press has hit him with one line of attack after another, They are never happy. If he had the cure to cancer in one hand and free tuition for college and trade schools in the other, the lamestream media would criticize him all the more.

The corporate media have their agenda. They want open borders, big money for their donors and their stockholders. They want a progressive (read, communistic) government. They play off the fears of the public and push distorted and misleading accounts, driving this country further apart while inflaming tensions.

No one should be surprised that President Trump holds the press in utter contempt.

Check out what CNN's rabid beat reported Jim Acosta did at the North Korea summit:

They have lied, cheated, distorted, and maligned the record of President Trump and his cabinet. They play defense for terrorists, communists, and left-wing ideologues, but ignore the good will and interests of the American people and our country.

Thank God that Trump called out the destructive effects of the left-wing press:

So funny to watch the Fake News, especially NBC and CNN. They are fighting hard to downplay the deal with North Korea. 500 days ago they would have “begged” for this deal-looked like war would break out. Our Country’s biggest enemy is the Fake News so easily promulgated by fools!
— Donald J. Trump (@realDonaldTrump) June 13, 2018

President Ronald Reagan had to deal with his fair share of opprobrium and condescension from the Big Three. Back then, television reporting didn't have cable TV, but the Big Three dominated not just the media, but the narrative about the President and his policies for the average viewing public.

Today, the mainstream media don't have the power which they held thirty years ago. But they are still damaging. The routine disregard for the American people, their determination to cover stories which promote their elitist agenda and ignore the will of the American taxpayers, their disdain for reality is costing them big time.

They are enemies of this country, the left-wing Fake News media, and we need more elected officials who stand up to the press and take them down a notch rather than play nice and hope that the cable news, the mainstream media, and the social media universe won't write bad things about them.

One of the biggest promoters of anti-Trump fake news is the Washington Post. The writers for the declining rag are demanding a pay raise. The diminishing number of journalists are not holding back their outrage with the CEO. Reporters ought to consider why newspapers are struggling to make money, and it's about more than the increasing influence of social media and technology to report the news.

Washington Post is not paying their employees enough? Yet the public hasn't heard about this. "Democracy Dies in Darkness", right? How about truth and accuracy? What about professionalism? What about basic dignity?


Washington Post employees want to go on strike because Bezos isn’t paying them enough. I think a really long strike would be a great idea. Employees would get more money and we would get rid of Fake News for an extended period of time! Is @WaPo a registered lobbyist?
— Donald J. Trump (@realDonaldTrump) June 17, 2018

Yes, please, let's watch the Washington Post shutter its doors for a month or two. Wouldn't it be nice for major corporate media interests to lose their voice and their oppressive influence over the wider news narrative? President Trump's tweets are clearly biased, no surprise there, but he speaks his mind for everyone to read--and without a filter.