His death is still stunning to the viewing and reading public which would look forward to his take on the issues of the day. Yes, he had announced that his time was coming to an end about one month ago, but still it was too soon for him to go. Having undergone surgery for stomach cancer, his prognosis seemed good. Then the cancer resurfaced aggressively. With only weeks to live, Krauthammer wrote his final good-byes to the public: “I am sad to leave, but I leave with the knowledge that I lived the life that I intended.” And what a life it was.

Born in Manhattan, New York to a family of Orthodox Jews from Belgium and Ukraine, he studied primarily in Montreal, Quebec, Canada. Interestingly enough, the family spoke French at home, but his English was magnificent. At McGill College, he majored in economics and political science, but then pursued medicine, specifically psychiatry. He trained at Harvard, then Balliol College at Oxford. An impressive academic pedigree, to say the least. It’s worth nothing that he accomplished so much in spite of a tragic diving accident during his first year in medical school. He hardly paid attention to his paralysis, and I didn’t know about it until recently.

As a clinical psychiatrist, he helped write the third edition of the Diagnostic and Statistical Manual of Mental Disorders (DSM) manual in 1980. He discovered a different variant of manic-depressive disorder called “secondary mania”. His work led him to the Carter Administration, first to assist with research in mental health, then as a speech writer for Vice President Walter Mondale, which followed from his contributions to The New Republic, Time Magazine, and eventually the Washington Post.
Even though his career shifted from psychiatry to journalism, the core subjects of his professional did not change. After all, a recent survey confirmed that the highest number of psychopaths are concentrated in Washington DC. His diagnostic skills featured prominently in his work, and for good reason. He described the roots causes, not the effects of foreign and domestic policy very credibly.

How can one not see his psychiatric skills at work when he referenced the United States as the sole superpower in the world in his article "The Unipolar Moment”, published in Foreign Affairs in 1991?
Krauthammer has received a wide array of praise and eulogies following his untimely demise, but I write to share my thoughts because he served as one of a few inspirations for me to become a national columnist. It wasn’t his ready wit or his broad knowledge and vocabulary which engaged me, and I didn’t learn about him reading the Washington Post or even watching Fox News. I first learned about him when he was a guest speaker in the 2004 documentary Celsius 41.11: The Temperature at Which the Brain ... Begins to Die. The film served as a welcome counterpoint to the Michael Moore crockumentary Fahrenheit 9-11. In contrast to the sophomoric lies from the faux-populist from Flint, the Celsius documentary took a more precise, conservative look at President George W. Bush’s decision to invade Iraq.

As a featured panelist on the film, Krauthammer outlined sound arguments for Bush’s foreign policy decisions, including the necessary fight against radical Islamic terrorism. As a college student with free time to research more recent history and political thought, I looked up his latest works. One collection of his essays, printed in Cutting Edges served as my formative introduction to his mindset as well as his admiration for Ronald Reagan’s foreign policy and free enterprise agenda.

Unlike me, Krauthammer left college a liberal but became conservative following further research as well as alienation from the aggressive left-wing tendencies of the Democratic Party. After reading Charles Murray’s exhaustive study Losing Ground, which documented the failures of government welfare in War on Poverty, Krauthammer became a fiscal conservative, recognizing the power of free markets as opposed to government subsidy to help poor people prosper. His cultural issues shifted a little less. He opposed euthanasia, but remained pro-choice. Later, he opposed Roe v. Wade, declared that that court decision should be overturned. 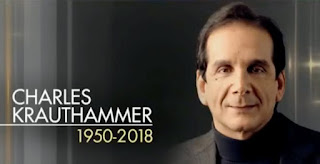 His departure is bittersweet, since Krauthammer’s death signals a few final milestones. First, the printed press itself, since he and his politically astute peers came of age in the Age of Print. Second, the decline of neoconservatism. This aggressive, interventionist foreign policy coupled with an increased disdain for New Deal/Great Society domestic interventionism has had its day. He coined the “Reagan Doctrine”, but Reagan was not a manic interventionist, and the Trump Doctrine resembles Reagan’s policies of peace through strategic, limited displays of strength sans massive military expense. Moreover, the national maladies of illegal immigration and imbalanced trade deals have hurt working Americans, and their treatment required a populist agenda. Those issues were simply not Krauthammer’s specialty.

Granted, he didn’t like Trump, and he didn’t vote for Trump. During the 2016 GOP Presidential primary, I even wrote one article featuring one of his derisive monikers for the presidential nominee. Towards the end of his career, however, reassessing Trump’s first 500 days, Krauthammer found more reasons to like him “He is the President, and I want him to succeed. I am a patriotic American,” he declared. In turn, President Trump made peace with the writer, addressing him as “Dr. Krauthammer” in one speech. Still remaining steadfast in his convictions, the writer was pleased.
Rest in peace, Dr. Krauthammer.