I just received yet another note about Sara Pearlman, the LGBT-CRT activist disguised as a teacher at Richardson Middle School in Torrance, CA:

Here's the note I received from the parent:

Remember that write up you did on Ms. Pearlman who has the "Bad Cop, no donut" sticker in her classroom? [Here's the link if you missed that post].
Well, she is still at it. She is indoctrinating our children @ Richardson. Daily she requires students to write/discuss about equality, gender rights and sexual preferences with our youth. She still flies 2 flags in her classroom, one is for LBGTQ and the other is gay pride.
Here are her back-to-school slides to share as well, proving her indoctrination even at the parent level. 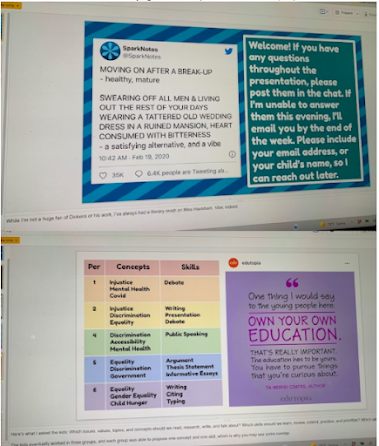 Also, check out her Amazon book "wishlist":
https://www.amazon.com/hz/wishlist/ls/755BEOZ0DJVN?ref_=wl_share
Here's a sample of the books that she wants to read:
Opposition to natural law and national borders:

Ink Knows No Borders: Poems of the Immigrant and Refugee Experience

Americanized: Rebel Without a Green Card

It's Trevor Noah: Born a Crime: Stories from a South African Childhood (Adapted for Young Readers)

Bonnie and Clyde: The Making of a Legend

The Borden Murders: Lizzie Borden and the Trial of the Century

by Kelly Jensen (Paperback)
4.6 out of 5 stars 142
$14.59$14.59 FREE Shipping  on orders over $25.00 shipped by Amazon or get Fast, Free Shipping with Amazon Prime
57 Used & New  from $3.34
With Pearlman, it only gets worse.
She is the club sponsor of the "Gay Straight Alliance" at the campus. We are talking about a Middle School! This subject matter has no business being pushed on kids at any grade level, and what's worse is that middle school children are considerably more doubtful, confused about their identity at this age, including their place in the world. Issues relating to sexuality have no place in the classroom, or even in an extra-curricular club.

It's becoming increasingly clear to parents in Torrance Unified that teachers like Sara Pearlman want to push a destructive agenda, rather than simply teacher English. Teachers in the K-12 system want to bring the cultural and moral degradation of the University system into the government-school classroom. These abuses need to stop. She needs to go.
Torrance Unified School District needs to do a better job of vetting the teachers whom they allow in the classroom.
And we need to demand reforms and better staff in the classroom for the students.
Contact Richardson Middle School:
Address: 23751 Nancylee Ln, Torrance, CA 90505Phone: (310) 533-4790
Contact the Principal:
Tayo Balogun:
Phone: (310) 533-4790 x8980
Email: balogun.tayo@tusd.org
Contact the School Board, too:

Posted by Arthur Christopher Schaper at 3:35 PM No comments:

TPUSA Wants to Save Colleges, but How?

TPUSA has already received a lot of well-placed criticism for pushing the conservative cause and the conservative movement in the libertarian camp, endorsing gay marriage and transgenderism.
But, why not push a more well-placed criticism?
What exactly are they accomplishing by going to colleges in the first place?
Here's their latest eblast talking about TPUSA efforts on college campuses:

By now, I’m sure you're as furious as I am with the White House’s absurd and illegal COVID vaccine mandate.

The federal government has NO POWER to get involved in your medical decisions. PERIOD!

But for millions of college students in America today, it’s not just the federal government they have to worry about.

In fact, more than 2,500 colleges and universities are FORCING students to get the COVID vaccine... DEMANDING that they publicly share their medical history... and BANNING them from school if they don’t comply!

My friend, this is the pattern for vaccine mandates across America--including Joe Biden’s. And if we don’t stand up against it now, there’s no telling how aggressive the federal government will get in their quest to force this vaccine on you and me whether we want it or not.

That’s why Turning Point USA and our army of 400,000 student activists are leading the battle against forced COVID vaccines on campus. Will you stand with us today by making a generous, tax-deductible contribution of $25, $35, $50, $75, or whatever you can possibly afford to help fuel our ongoing efforts?

To ensure that students are ready to win the fight for freedom against radical college administrations, we’ve launched a “NO FORCED VAX” campaign and created engaging and educational activism kits that we’re ready to ship out right away— and we must get them into the hands of students who need and want them right now.

Your gift right now will help make that possible.

This move by the universities is not about vaccines AT ALL. It’s about freedom, choice, information, and constitutional rights.

Young and healthy students — the least affected by the disease — must be free to decide what is best for them alongside their doctors… not college administrators or bureaucrats.

The same goes for all Americans, but the Biden administration has watched what these universities have been able to get away with—and put their policies on steroids.

As I write this email, thousands of students have been denied reentry to their campuses until they can show proof of vaccination. One student at Rutgers was even locked out of his ONLINE college classes until he takes the vaccine!

If we let these schools exercise this kind of power over their students, I hate to see what the White House comes up with next!

We must win this campus battle right now, or we’ll be fighting it on our own doorsteps.

Please partner with TPUSA NOW in the fight against forced vaccinations! With your gift of $25 today, you’ll help fund one activism kit for students on a campus that’s essentially forcing them to get the COVID vaccine. These activism kits are crucial to teaching students how to stand up for their freedom at these anti-liberty schools.

Thank you for your support!

1. Is Charlie Kirk and TPUSA really getting anything done when they go to college campuses and host discussions?

2. Is it really enough, or it is really a victory that an organization like TPUSA changes minds? There are many polls out there which make it quite clear that people hate what is happening in this country. Yet, polls do not change the polarity of a country, or the direction of its leadership. Polls on paper is not the same as voting at the polls to elect new leaders. That's where the changes need to take place.

3. Where is the real activism here? Activism is not gathering a bunch of people in a room and giving a presentation. That may make people feel good, and make them feel that they are making a difference. But is it really making a difference?

4. People can argue about how liberal or how disconnected or inconsistence the TPUSA movment is on issues and values, but we need to be focusing all the more on getting things done. We need to pushing the culture back into its proper order, and we need to put a stop to this left-wing slouching-turned-rushing towards Gomorrah which has become all too commonplace in the country.

TPUSA wants to save the colleges, or better yet bankrupt their indoctrination movement. But how? A bunch of college students showing up to ask questions and spar with TPUSA on key issues is not going to accomplish much.

Posted by Arthur Christopher Schaper at 6:05 PM No comments:

What gives with Activist Mommy? Now she is just "Elizabeth Johnston."

Here is her latest eblast:

So, what's going on here? Activist Mommy is no longer an activist mommy. She used to go out of her way to list herself as an activist. There was a time when she would help parents and other citizens fight back against sexual perversion and the rest of the evil that is becoming commonplace.
Now, she just ... reports. What's going on here?
Oh, and sure, she will ask for donations, too:
Stand with Elizabeth JohnstonThe big tech companies like Facebook and Google are trying to choke us out, and have demonetized our content, cutting off our income that helped sustain our ministry. If you feel led, please consider a donation to help us fight back against the progressive agenda and biased censorship.
So ... she wants us to donate to her so that she can fight Big Tech censorship. Really?
What exactly is she doing to combat the censorship? And why has she stepped away from activism to report?
It's simple: she has revealed her true colors as one more grifter on the right. It's not about making the country better, or fighting the cultural marxist evil. It was all about giving herself a profile, going to all the  nice conferences, making lots of money, and then doing nothing else about it.
It's really frustrating, too, because our Texas MassResistance chapter chair, Tracy Shannon, worked very hard with other activists in the Houston area to shut down Drag Queen Story Hour, and Activist Mommy (when she was still willing to call herself that) fundraised off of that effort!
It's really a problem in our culture. It's a bigger problem with conservatives and pro-family activists, because so many of these larger names and headline groups are interested only in access, photo-ops, big conferences, and heavy fundraising. That's it.
Everyday citizens who want to fight the culture war need to start asking serious questions when they donate to a group or follow a group online. Many of the dissident Right voices on social media are calling out Conservative Inc. But even that is turning into another grift. Nothing is changing in the streets and in the minds of American citizens. Nothing is going to get better of conservatives in particular and citizens in general don't start asking more serious questions and demand serious action and activism from the groups that claim to want to help them.
Activist Mommy is no longer an activist mommy, according to her blog and her website network. But let's cut the crap: she never really was an activist to begin with. It was all about the money in the first place, and there is no way that a now-divorced mother of ten could be writing all those articles herself anyway. One more grifter has been pushed through the sifter.
Posted by Arthur Christopher Schaper at 2:25 PM No comments: