Democrats' Use and Abuse of History to Push Open Borders Agenda

The Democratic Party has completely lost its mind, if that political party ever had a mind. They care more about MS-13, illegal alien lawbreakers, yet they have no problem with American citizens living like poor, downtrodden refugees in their own country.

They are now comparing ICE agents and border security to Nazi tyranny.

This is just untenable, outrageous, insane.

The Jews, Gypsies, and other targeted groups were not illegal aliens, foreign nationals in their own country. They had been born, grew up, lived, and thrived in their countries, then Adolph Hilter, the SS, and the rest of his murderous bureaucracy launched the Final Solution to get rid of all European Jewry.

Last time I checked, I do not see border patrol agents killing people.

Last time I checked, the people streaming across our borders are not citizens of the United States.

Last time I checked, the people who are facing arrest and removal from the United States have not been targeted because of their race, but because of their actions: illegal entry and unlawful presence.

Last time I checked, ICE and other executive departments along our southern border have not set up massive gas chambers.

It is beyond disgusting to see elected officials and the corrupt media class dumb down the Holocaust and other Nazi aggression to score political points.

Now the Democrats are switching off their rhetorical flourishes. They are comparing the detainment of illegal aliens, including the separation of families, to the internment of Japanese-Americans during World War II.

This is not just a stretch, but outrageous on so many levels.

Again, Japanese-Americans were Americans, but of Japanese descent. They were citizens, living in the United States, and their rights were trampled upon because of their nationality. That is wrong.

In spite of this heinous treatment at the hands of the Roosevelt Administration, many Japanese-Americans would continue to serve this country. These Americans were not lawbreakers. 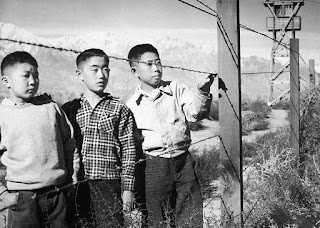 The foreign nationals crowding our borders--they are criminals, regardless of their reasons for coming to the United States.

The Democrats' misuse of history is beyond corrupt. It's disgusting, and it harms our proper respect and appreciation not just for our past, but for the rule of law.

Is it any wonder why Democrats are struggling politically? They dishonor our veterans, they reject the needs of citizens and put illegal aliens first. They don't care about the working-class or the American poor. The press spends more time propping up their corrupt liberal agenda, and they refuse to confront them for taking advantage of previous (Democratic) presidents' abuse of minorities.

How will this end?

Not well.
Posted by Arthur Christopher Schaper at 12:38 PM