Enough With the Faux Outrage About Illegal Alien Family Separation

The Fake News media’s determination to stir up strife over illegal immigration has hit a new low. First, a massive caravan marched toward the America-Mexico border two months ago. The Open-Borders Left and their media ilk threw a fit because instead of rolling out the red carpet for these “refugees”, the Department of Homeland Security enforced the law and arrested the border crossers invading our country. 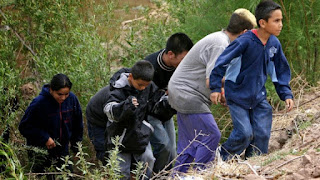 Now the media is hammering the Trump Administration because executive departments, at the behest of Attorney General Jeff Sessions, are separating parents and children when apprehended crossing the border illegally. The headlines give the whole gamut:

The last one is crazy, but par for the course.

President Trump, his executive cabinet, his press secretaries have pushed back against the unjust uproar over this policy. The simple refrain is “It’s the law.” Yes, it’s codified in federal immigration statutes that individuals are not allowed to break into the United States. It’s common for adults on trial to be separated from their children during criminal court proceedings, too.

While the left-wing, lamestream media lie that illegal alien minors are pining away in cages, the truth is that they are receiving adequate food, shelter, clothing, and an education. The parents face prosecution for illegal entry, but the children receive basic care, probably better than what they had received in their home countries! This alone proves how badly we need the wall. American taxpayers are still footing the bills for these kids. Shouldn’t American children access these resources, not foreign nationals?

This whole media-hyped brouhaha is not that big of a deal.

When Americans commit crimes in the United States, they are arrested, tried, convicted. In some cases, they remain in jail since they cannot provide the bail. If they are parents, they are separated from arrest to conviction and incarceration. In more severe cases, they lose custody of their children and rightfully so. No one should lose their wits over illegal alien parents losing their kids for a period of time. Ann Coulter knocked this lie down in her extensive interview, then question-and-answer period with Jorge Ramos when she was promoting her book Adios, America.

Then the press jumped all over Sessions for quoting the Bible to enforce the nation’s laws, which includes the family separation. They write that AG Sessions was using Scripture to justify specifically the separation of migrant children from their law-breaking parents. Here’s the verse: “Let every soul be subject unto the higher powers. For there is no power but of God: the powers that be are ordained of God.” (Romans 13:1) Sessions’ broader argument focused on full and equal application of the law. Simply put, a country without a border is not a country, and with no United States, all of us would be lost.

Of course, there’s no specific verse which explicitly states “separate children from their parents.” For the record, there are no verses which teach that refugees may overrun the borders of another country because they seek asylum, but I digress. Liberals don’t accept the Bible as God’s Word, and they only resort to Scriptural arguments to shame conservatives for having points of view which they disagree with. Press Secretary Sanders handled the abusive hyena press corps handily on this issue, first with Jim Acosta, then with Brian Karem, whose behavior was completely inappropriate, yet Sanders handled the situation with poise.

What is maddening, however, is that even the conservative pundits along with the liberals are condemning these actions. Consider AG Sessions’ interview with Hugh Hewitt, in which the SoCal conservative asked Sessions to imagine what it would be like if his grandchildren were separated from him. Sessions is a citizen, Hughie, and he hasn’t placed any member of his in danger or lawless inconvenience. Sessions beat down these unfounded claims of compassion, reminding Hewitt that the United States has a right to secure borders, and that the citizens have a right to full enforcement of the law.

President Trump has rebuffed the media’s faux outrage by blaming the Democrats for the “family separation” legislation. Once again, “It’s the law”, but leaders in Washington and across the country are still not reverting the blame back to where it belongs: the illegal alien parents. Contrary to Low Energy Jeb Bush’s insensitive appraisal, it is not an act of love to enter into our country illegally.

And yet another part of this debate is missing. The chattering classes wail about the separation of illegal families, but what about the American parents who have been separated from their families and can never reunite with them? Kate Steinle’s parents will never have their daughter back. Nor will Don Rosenberg ever see his son Drew. What about Angie Morfin, Sabine Durden, or Mary Ann Mendoza? These and thousands of other American parents have lost their children—forever—because of illegal alien crimes.

Haven’t we heard enough about illegal aliens and their enablers cry about the plight of the illegal alien families separated at the border. They can still see their children, they can still reunite—back in their home countries, preferably. The closest thing to reunification for grieving parents like Agnes Gibboney? A visit to her son’s grave (see picture above) in Glendora, CA. Ronald De Silva was murdered by an illegal alien gang-banger who had been previously deported. 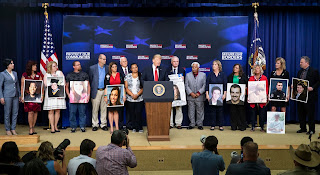 The media’s angst over the separation of families is overblown. Represent the facts, respect the law, and if the press is so worried about separate families, they should stop breaking into the United States in the first place. If the media and the political establishment don’t parents don’t want to be separated from their children, they should discourage illegal entry and unlawful presence in the United States of America.