The Daily Breeze: "The Long-Shot Gubernatorial Bid of David Hadley" 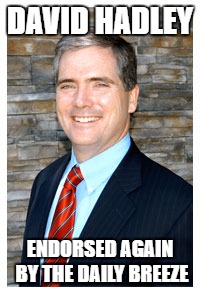 Why is the Torrance Daily Breeze all over former Assemblyman David Hadley's probing bid for Governor?

Believe me, it was the capstone on a great night for Republicans across the country, even in California.

2. He voted like a moderate in a state which has gone center-left, and even then those on the center-left feel left behind by the left.

3. He accomplished some welcome, much-needed reforms in Sacramento.

4. He was "outside of the political machine", and demonstrated considerable independence from politics as usual in Sacramento.

OK, it makes sense that the local newspaper would want to talk about David Hadley.

Did the article recently published in The Daily Breeze offer any kind of new information?

Are we going to get anything substantive out of this report?

I am beginning to wonder if

Manhattan Beach businessman David Hadley, who upset Democrat Al Muratsuchi in the 66th Assembly District two years ago before losing a rematch last fall, is weighing an even more unlikely political bid — a run for governor in a state where Republicans are increasingly an endangered species.

But why is this bid for Governor so unlikely?

It's not due to the Republican brand, which is facing some deep problems in the state of California.

The fault lies with Prop 14, which needs to be repealed, every word of it, just like Obamacare. The Top Two jungle primary, ushered in because of Prop 14, is hurting Republicans and third-party contenders in worse ways than anyone could ever imagine. 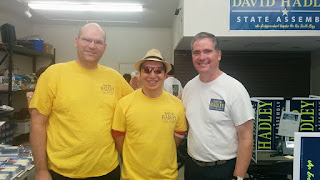 The Democratic Party has locked up all the special interests in the state of California. Add to that the voter fraud and illegal alien voting, and the massive amnesty-pandering protesters, and behold the perfect storm for hyper-Democratic destruction.

One former assemblyman did not hold back his bile about California's future. He simply accepts that the state will have to collapse under its overabundant welfarism, cronyism, and fraud. UGH!

Hadley, 52, has formed an exploratory committee to test the waters for a 2018 attempt to succeed Gov. Jerry Brown, a race that already has attracted some heavyweights on the Democratic side of the aisle. He said he will make a decision in the next couple of months.

My prediction--he is going to back out. The "Republican" heavyweights in this state will line up behind John Chiang, also of Torrance, while Gavin Newsom will further brandish is uber-liberal credentials to become the next Governor of California. A Newsom administration will be an absolute nuisance for California--is there any way to stop him?

Darry Sragow, an adjunct assistant professor of political science at USC, said given the overwhelming edge in state political registration Democrats enjoy — 3.7 million more than the GOP — it would appear unlikely Hadley could pull off a second unlikely victory.

Notice that Mr. Sragow is listed as a professor of political science, and from USC. To the Trojans' credit, they accurately predicted that Trump would have the edge over Hillary Clinton on Election Day.

Then again, "unlikely" rests in the eyes of the beholder, does it not?

I wish that Hadley's chances were more than unlikely, even though he is not my first choice for a Republican as governor.

“It’s pretty tough in 2016 if you’re a moderate Republican,” said Sragow, a veteran Democratic political consultant. “His loss in 2016 was arguably fresh evidence of that. The odds are overwhelmingly against him. This isn’t Republican territory. This isn’t Trump territory.”

Now see how the newspaper refers to Sragow as a "veteran political consultant."

So which is it? And what is this man teaching the young charges in his classroom?

Notice also how this political consultant outlined that California is not Republican territory, then divided "Republican" from Trump. Then there's another problem: why does a newspaper care what a DEMOCRATIC consultant has to say about a Republican candidate for any office?

How about asking a Republican consultant? They do exist in the state of California, even if they do a better job of making money for themselves than getting Republicans elected to office ...

Hadley declined to endorse either Donald Trump or Hilary Clinton for the presidency last year; he wrote an editorial for the Daily Breeze that contended both were unfit to hold the nation’s highest elective office.

That was a strategic mistake, in that many potential volunteers sat out his re-election bid in 2016. Lets not forget that the AD-66 Central Committee Chairman Janice Webb tried to pressure me to cancel the Latinos For Trump meeting in October 2016 because "the meeting itself is a problem."

What is the matter with some of these Republicans in California? They spend more time reading the biased narratives in the press or playing nice with Democrats, only to keep losing. This approach is not working, yet I fear that David Hadley just wants to go along with this pattern of thinking.

‘THE ADULT IN THE ROOM’

In an interview, Hadley said he would emphasize his moderate leanings if he throws his hat in the ring for statewide office.

I would agree that his views on key issues helped bring some balance to the state of California.

Sadly, when I hear "adult in the room", the phrase conjures up for me images of "Low Energy" Jeb or Kreepy Kasich, who were more interested in hugging the center and making nice with center-left interests on key issues. 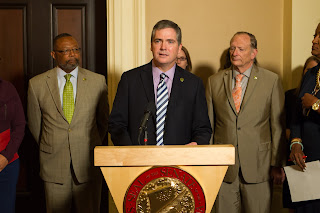 We don't need more "adults" who want to look nice for the camera and make nice with destructive interests hurting our state and our way of life.

Republican accomplishments are few in the Democrat-dominated Legislature.

But Hadley some welcome accomplishments. He got a school choice bill passed, and he helped usher though civil asset forfeiture reform, too. For the record, Democratic accomplishments are few and far between, especially if one counts the higher taxes and spending, the crumbling infrastructure, and the cultural corruption and malaise which have become staples of liberal Democratic dominance in the state of California.

“I’ve proven that my style and my views and my willingness to engage with people, whether I agree with them or not, appeals to Republicans, to Democrats, independents,” he said. “I can truly be a uniting kind of political figure, not a polarizing type of leader.”

Not sure about that anymore. Democrats in Sacramento are all invested in unity--for their own regressive causes. They do not play nice. They do not want to play along in any way, and why should they? After all, they hold all the political cards in Sacramento at this time.

And if Republicans don't wake up to this dangerous fact, they may be scuttled away into complete irrelevance forever.

SEARCHING FOR A BASE

But it’s unclear whether Hadley has any kind of base in the current political climate, Sragow said. 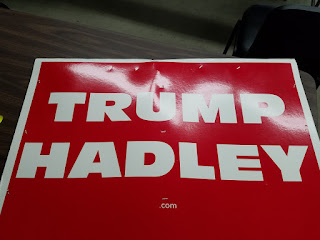 “If he’s Republican and he abandons Trump, then he’s forfeiting the conservative Republican base,” he said. “The Republican base isn’t enough (anyway). And converting increasing numbers of independent voters and solid Democrats is very difficult, especially with Donald Trump as president.”

Newsflash, Democratic consultant: Hadley abandoned Trump in 2016. I don't see him reversing that trend in 2018.


Why am I suddenly reading about John Cox? What does this have to do with David Hadley? There is no transition, no indication that the writer was going to write in another direction. Nick Green is not the stylist one would expect him to be. The writer also forgot to mention Rosie Greer, Laura Smith, and Dr. Robert Newman, among others.

This is all very funny and very sad at the same time. Is it possible that so many Democrats will be pulling each other apart that a Republican can sneak though? I am not so sure at this point.

The Associated Press contributed to this report.

Wow, Nick ... can't you at least write something of substance on your own? Can't you? At all?
Posted by Arthur Christopher Schaper at 10:59 AM