Stepping up campaign of harassment and intimidation to stop bill in legislature.

Bizarre protest outside of Governor's residence. 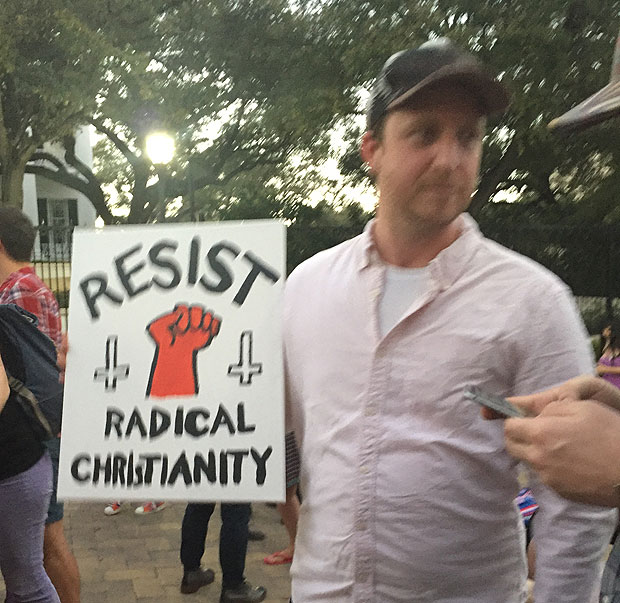 The LGBT movement sees Christian faith as a primary enemy. [All photos by MassResistance.]
Pro-family people view legislation like the current Texas “bathroom privacy” bill, SB6, as a reasonable protection for families from the transgender agenda being aggressively pushed by the liberal political establishment.

But the LGBT movement is out to stop bills like SB6 at any cost. To them, forcing transgender bathrooms and locker rooms is an extremely serious national goal – the next step from the “gay marriage” fight. And similar to their approach in the “gay marriage” fight, LGBT activists see Christian values as something that must be defeated and soundly eliminated from the public forum.

Texas bill SB6 is similar to the bill passed last year in North Carolina. It would block cities and towns from passing laws that force “transgender” behavior into restrooms, locker rooms, showers of public accommodations, schools, businesses, etc. It also applies to government buildings, public schools and universities, and any other school that receives state funding. (Any business or private group can allow what it wants.)

To our opponents, this is war. While MassResistance Texas and other pro-family groups are helping pro-family voters lobby their public officials to pass SB6, the LGBT movement in Texas is ramping up a campaign of anti-Christian hate, threats, intimidation, and harassment.

“Queer Dance” in front of the Governor’s residence

The radicals took their campaign public pretty quickly. On February 21, the liberal Dallas Morning News featured a gushing article announcing that 350 LGBT activists were preparing to converge outside a window of the Governor’s residence in Austin for a perverse “Queer Dance Freakout” protest of SB6, targeting Governor Greg Abbott and also Lt. Gov. Dan Patrick.
Here's how the event’s Facebook page described it.

Their reasons for protesting Bill SB6 were described on their Facebook page. It reflects more than a hint of emotional dysfunction. 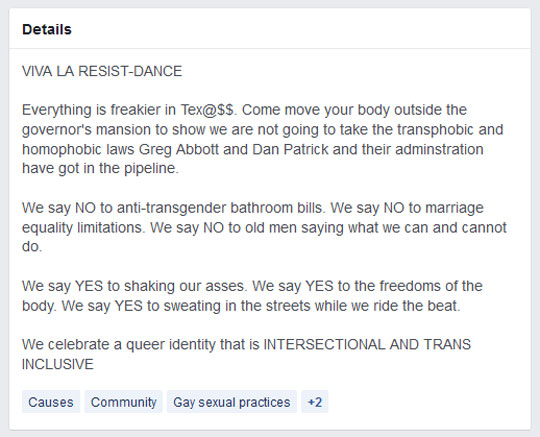 A MassResistance Texas activist also came to the Feb. 23 protest and took photos. This is what the mainstream media didn't show you!

This is the heart and soul of the LGBT movement. These are the people who want to influence public policy in America. They certainly don’t hide who they are and what they’re all about. By any objective measure, these are very disturbed, hateful people, as our new book about LGBT behavior and health outlines. 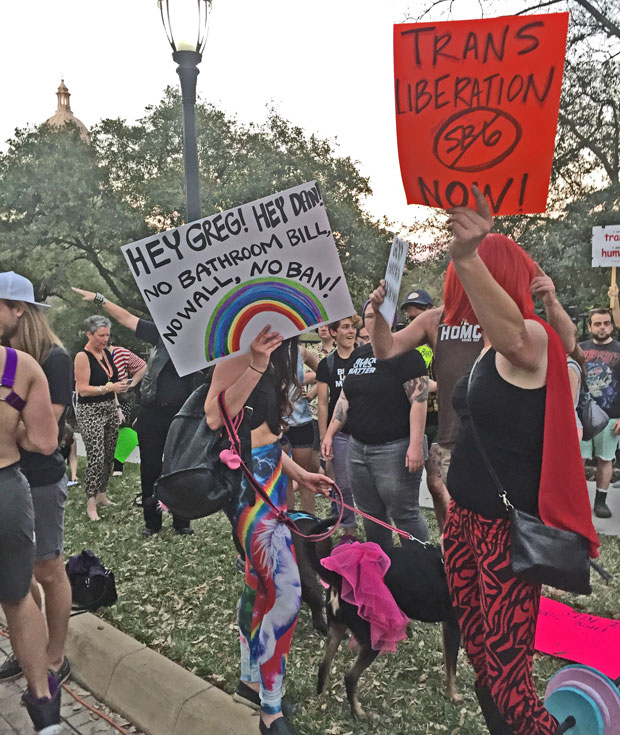 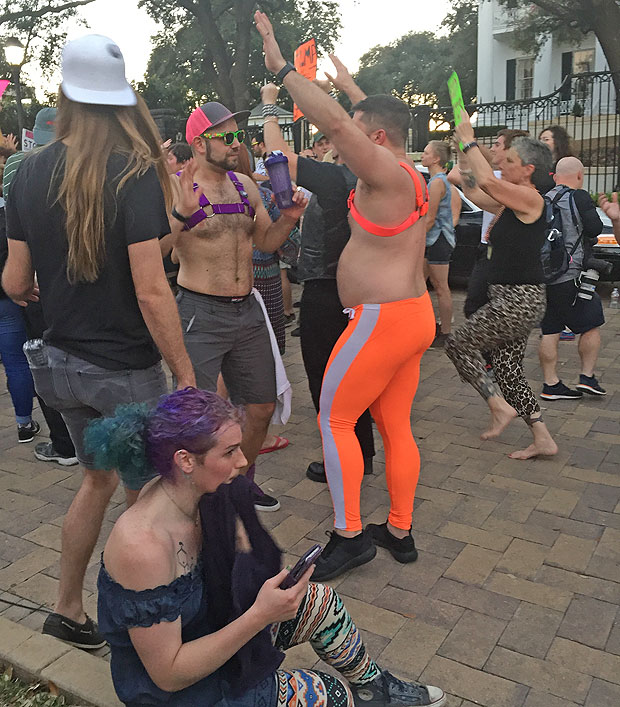 Seriously, do you want these people deciding public policy for your children? 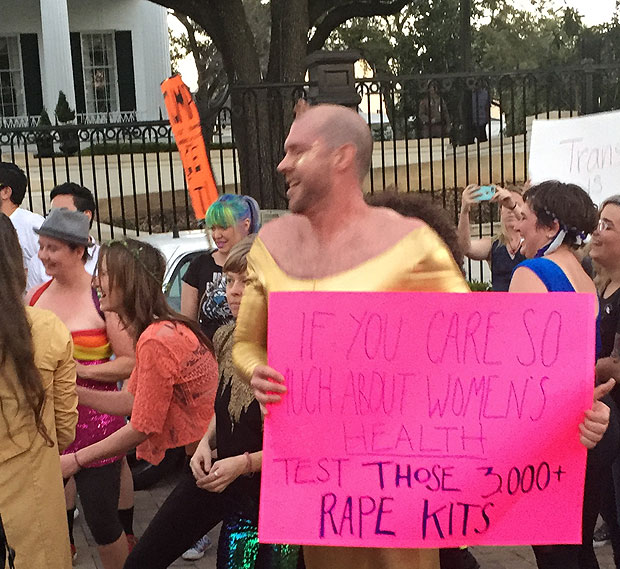 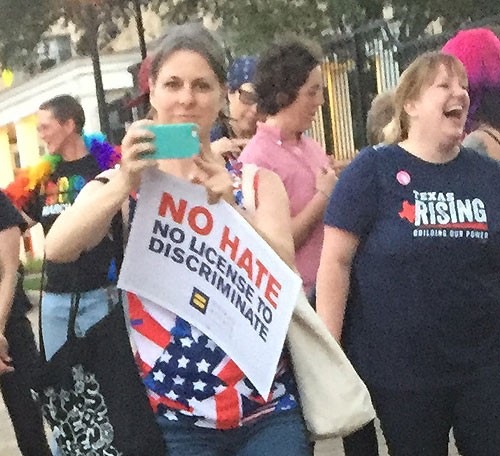 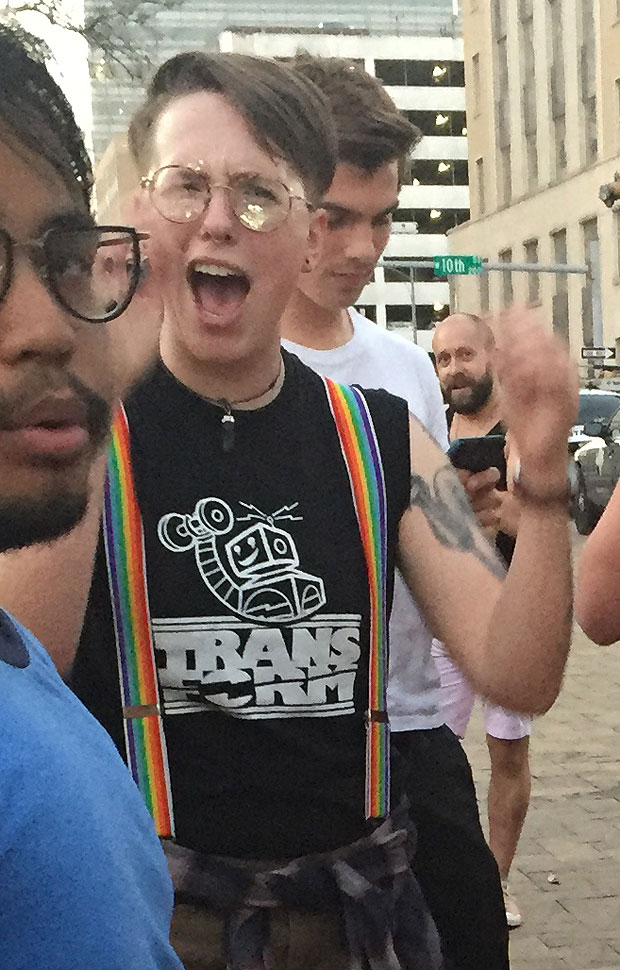 This person in the "trans" shirt appears to be a female. 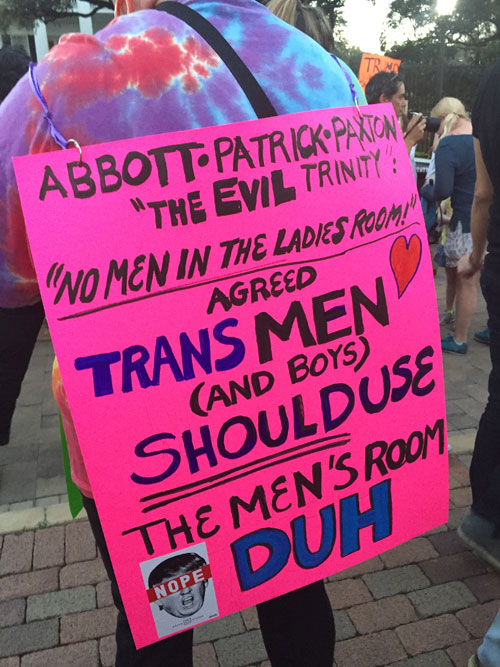 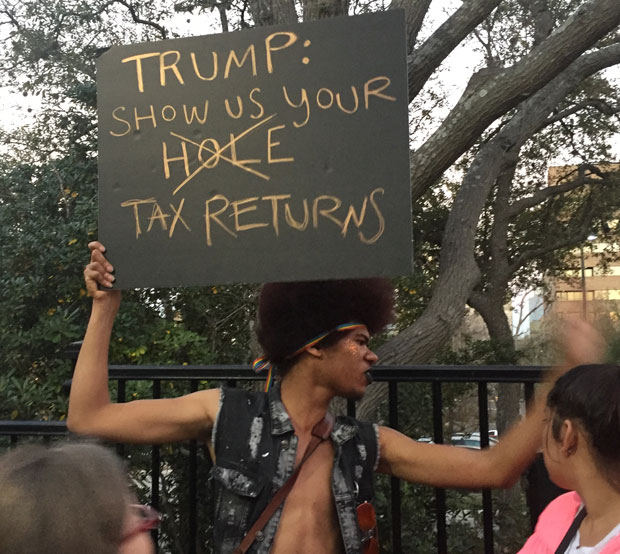 This is the puerile mindset one finds everywhere among LGBT activists.
According to the Dallas Morning News article, the LGBT campaign actually started a week before the protest. On Feb. 16 the lead sponsor of SB6, Sen. Lois Kolkhorst began receiving death threats as well as extremely obscene emails directed to her office and staff. Sen. Kolkhorst has said she is not letting this stop her from “doing what is right.” But the LGBT movement knows that other legislators will not be so resilient.

Why this is so important to the LGBT movement: Children

This radical agenda includes much more than just bathroom and locker room use by those of the opposite sex. Trans bathrooms are just the foot in the door for grander schemes.
The LGBT movement knows that forcing society to accept "transgender bathrooms" ultimately legitimizes a range of larger abuses, such as supporting young children in "trans" identities with transgender-affirming counseling -- and therefore not objecting to major hospitals that have clinics which give them puberty blockers and opposite-sex hormones, breast removal, etc. (The Children’s Medical Center in Dallas, among others around the country, recently opened a “transgender clinic” for children that does many of these ghoulish things.)

And the pro-transgender indoctrination in schools is also well underway.
The stakes couldn't be higher.

Texas is different from many other parts of the country. We don’t think that these nauseating intimidation tactics will have enough of an effect to sway the vote in the Legislature on SB6 or similar pro-family bills. And it brings to light the lunatic-fringe nature of that movement that we finally see when the carefully constructed veneer of normalcy is lifted. If these disturbed radicals are allowed to steer where our society goes, we’re all in trouble.

Of course, the LGBT activists are just part of the force out against HB6. Corporate America and the entire liberal political establishment are lining up for the battle to stop it. (We will be reporting more on that.)

MassResistance Texas is committed to helping organize people to “go on the offense” to do the most effective lobbying possible. If the pro-family movement in Texas continues to push hard, we believe this bill will pass. If people learn about the abuse of children this transgender movement is fostering, we can halt this destructive agenda.
The MassResistance Texas Conference in Austin this weekend (April 1) will hopefully get that rolling!