I had a lot of fun at the #WhyTorrance Town Hall headed by Mayor Pat Furey.

He was hoping for an easy forum in which he can pat himself on the back and tell everyone what a great mayor he is.

I had a lot of questions for the Mayor--and instead of answering my questions, he wanted to avoid me then ignore me.

But I was not going to be put aside.

He gave me the impression that only certain types of questions would be tolerated.


I noticed that there was one police officer in the room.

He stayed close by me during this Town Hall.

Not sure what he was worried about ... 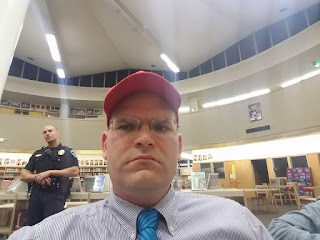 Towards the end of the townhall, Furey actually started taking questions from the audience!

First, I demanded answers on the WestCal group that kisses his feet. Another member of the audience actually pressed him for answers!

Notice here that the mayor told me to be quiet!


Here was my first question:

Then came the issues about Torrance as a sanctuary city:

After the townhall ended, I directly confronted the mayor about the McCormick PAC:

And finally, I followed him out and confronted him about the other perversities that he is engaging in:

I am grateful to all the support that the Beach Cities Republicans board and membership to me and others.

Tracy was the key supporter for me on this evening. She prodded Furey about CCA, and I had the chance to follow up on him.

More residents in the city have told me that they are glad that I confronted the mayor. He showed his real nature, someone who is angry, prone to blame others, unwilling to take ownership of his own failings, more interested in lashing out at others.

It's time to put an end to this guy's reign of terror/error.