I have written about South Bay 350 Joe Galliani before.

He is a Big Green advocate.

He is a fervent believer in climate change, or is it global warming, or is it ozone depletion--I am not sure, since the name of the latest colossal climate disaster keeps changing from year to year,

Yes, it's real. The world has gotten hotter recently.

But let's also point out that the polar ice caps are actually thicker.

How about the unprecedented rainfall all over Los Angeles County and throughout California?

Weather patterns go in cycles. There are warming trends, and there are cooling trends.

The last thing that any city or state government should try to do is take control of the weather and stop the emissions of CO2, as if our little dent can make a difference.

And as if we need to worry about making some kind of difference in the first place.

Global warming is just climate alarmism, a regressive scheme to expand the size of the state into our daily lives.

But 350 Joe is a big proponent of this scheme.

And he's also a bully.


He likes to shame and demean people who do not agree with him.

He called Tracy Hopkins and her husband Mark "climate deniers" in public.

He told me to "sit down" during a hearing in Hermosa Beach.

Joe is such a nice guy!

Of course, he didn't take the Redondo Beach City Manager's announcement all that well when the city council voted down further exploration into CCA.

Check out this video after the city council meeting, during an inerview with The Beach Reporter:

And here are some of the professional remarks he said to me:

"But I get to interact with people like Arthur ...

"Didn't Obama wiretap you too?"

"Because your big hero is the all-time liar ..."

"I love you, Arthur ... I'm not mockig you. No matter how much weight you put on, I will never mock you.

"No  matter how big a blouse you wear in public, I will never mock you."

When I confronted him about shaming Tracy and Mark Hopkins. he actually said "I don't know who they are."

Then he asked me "Do you have a lie detector?"

When I told him that everyone can detect his lies, he responded "All five of your followers?" 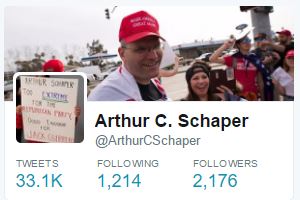 Then he got really petty:

"Do you feel mocked? Do you talk about this in therapy?"

OUCH! It seems like 350 Joe's little feelings got hurt!

Then he resorted to the same bullying tactic used by the police during the Civil Rights Movement against black people fighting for their rights:

"You can keep your voice down, You're in public."

I wish that the reporter had given me eual time, but he just decided to walk away.

I guess I had to do his job in going after 350 Joe and his bullying Big Green agenda myself.

I strongly encourage anyone who is dealing with this guy to share the above video with staff and elected officials.

Someone with such latent disregard for others has no business pushing any kind of proposal or leading any co-op or board or anything else.

The lack of professionalism is striking. Why do these Big Green people have to resort to shaming and bullying others to make their case?

Because they are LYING! And that's why this Environmentalism fad leads to such abusive behavior from its most ardent adherents like 350 JOE!

Posted by Arthur Christopher Schaper at 9:09 AM