Just when I thought that the California Democratic Party and their minions could not get any worse ...

This legislation is opposed by large segments of California's population, Republican and Democratic voters, along with Independents.

Voters of all backgrounds oppose this perverse move to turn the entire state of California into a sanctuary state.

I have spoken with residents in the city of Torrance, and they are deeply concerned about this legislation.

Much to my dismay, I spoke with staffers in State Senator Ben Allen's office.

I presented to the staffers the following information to oppose this terrible bill.

4. Enable and even Invite illegal aliens to come to the state of California.

I showed the state senator's staff the picture of four Californians killed by illegal aliens including Kate Steinle and Ruben Morfin. 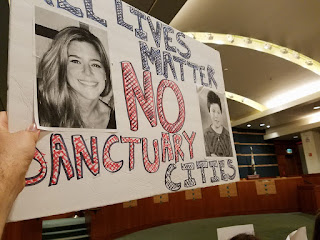 Then the staffer dropped the bomb on me:

"Senator Allen has decided that he will vote for SB 54."

This announcement was a  gut blow.

I demanded answers why. The staffer simply told me that he did not know why.

Pretty snide, if I may say so!

We cannot have the state of California turning into a haven for criminal fugitives. This is all wrong.

Contact his office and demand that Senate Ben Allen change his mind without hesitation: