I have long suspected that Easy Reader News was more left-leaning than The Beach Reporter or even the Daily Breeze.

Once, the magazine displayed an elderly gay couple on the cover.

A number of families were really offended by that.

Another article focused on the plight of a wounded veteran who lost his home because of mismanagement from Wells Fargo. 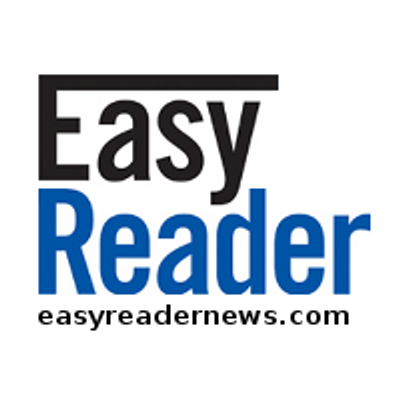 A third story looked into the troubled background of a few store thieves who had wreaked havoc on a convenience store. It's a very left-wing world view that puts the needs of the criminal ahead of the needs of the community.

When the Hermosa Beach residents rose up to protest the Carbon Neutrality programs, Easy Reader maligned them as "riotous."

No, they weren't! That's very offensive.

Now I feel that my concerns are justified with what just happened in their report on the Redondo Beach City Council meeting from March 21, 2017.

I am even more sad at the notion that creepy Big Greenie Meanie Joe Galliani was going to bully another city council into going Community Choice Aggregation (CCA).

But our team of conservatives was ready to step up and fight.


At the end of the meeting, the city council posited a number of meaningful questions to Galliani and the city staffers. The commonsense questions focused on issues like "How much time will this take from city staff?" and "How much is this going to cost?"

Then came the final vote on whether to continue exploration of CCA.

Now, as I understand Robert's Rules of Order, that means two "No" votes, since an abstention means no.

The mayor signaled that he had no idea what happens next, since such a voter result had never happened before.

The city manager declared that the motion failed.

But now the City Attorney claims that such a vote means passage?

I contacted someone in the city to explain. She told me that the city council will revote the issue, since there is so much confusion.

The Beach Reporter got that right.

But not Easy Reader!

They jumped into the narrative head-first, convinced that the Green proposal won!


When time came for a vote and direction, Councilman Christian Horvath, who has been leading the charge for a CCA in Redondo Beach, was joined by Councilman Bill Brand in voting to continue a study. Emdee voted against, while Sammarco quietly abstained.

As Councilwoman Martha Barbee left the meeting early with an illness, the vote initially seemed dead for want of a three-vote quorum.

However, according to Horvath, an assertion by City Manager Joe Hoefgen that the measure had died was found to be incorrect.

Sammarco did not respond to a request for comment.

Why does Christian Horvath have the final say on this? What about the city attorney? Or other city staffers?

This report went out in a very hasty fashion to say the least.

Check out the difference between the URL and the headline for the article:

But then the printed headline reads: 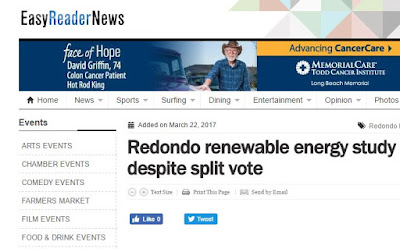 What is going on?

It's time to hold the local news as well as local elected officials accountable.

Until then, the Redondo Beach City Council must stage a re-vote on this contentious issue.

It's time for residents throughout the South Bay to recognize that the CCA nonsense is more government, less energy, and less accountability. President Donald Trump is already cutting the funding for these Joint Power Associations, which include Southern California Association of Governments (SCAG) and South Bay Council of Governments (SBCOG).

Do we need another one based on false premises and abortive opportunities in the South Bay? I say "NO!"


Posted by Arthur Christopher Schaper at 11:32 AM