We the People Rising went to Hilda Solis' Huntington Park office to demand answers for why she thought it was appropriate to spend $10 million of Los Angeles County taxpayers' money to defend illegal aliens with legal counsel.

We arrived in her office on the second floor of the Hub Cities building on Zoe Ave.

Instead of finding the time and chance to speak with her office staff, we found the door locked out:

The Huntington Park police were happy to see us.

They are aware of all things that we are doing in the city.

Before the police arrived, one of the security staffers tried to take my camera! 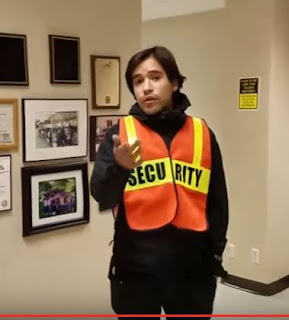 Yes, he grabbed at me to take my phone!

Here's another shot of the security guard trying to take my phone! 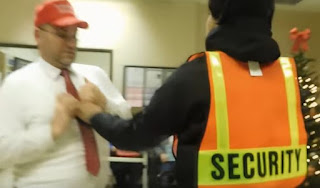 Here's the recording of what happened from Robin Hvidston's camera:


Instead of letting that punk get away with it, I reported a crime to the Huntington Park police department.

Here's a recording of my comments to the HP Police Department:

They took the report!

And then I got a phone call from Lieutenant Patrick Kraut.

I had a meeting with him at the Huntington Park police department about three weeks later.

Because the nature of this offense was not as serious as murder or rape, my case had to wait.

And that is OK.

The rest of the team told me that they are glad that I reported the crime.

They were relieved that I made a report and pressed charges. If We the People do not stand up to these bullies,

At the police department, the officer went over with me what happened.

I presented to him what happened to me.

At first, I thought that was going to be an assault charge.

The whole thing happened so fast, though, that I could not remember everything. I did not recall perfectly whether he had touched me or not.

But it was crystal clear that he put his hand on my phone to try and take it from me.

The security above was from a contracted company.

But We the People Rising did not stop there.

A number of cameras recorded everything that happened in the room.

My camera, Robin's, and other cameras in the room recorded everything that happened.

This is justice in action!

Here is a photo of the report written up for the incident: 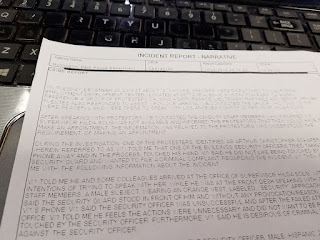 Here is the first email that I received from the Lieutenant:

Our Investigative Bureau is in receipt of the crime report for which you are a listed victim.   As outlined in a message I left on you voicemail earlier today, our investigators would like to meet with you in order to obtain additional details, and any evidence you may be in possession of.  Our normal operating hours for the investigative bureau are Monday through Thursday, from 6 a.m. to 4 p.m.   Special arrangements can be made upon request.   I look forward to hearing from you.

Here is the second email that I received:

The 17th will work fine, however, I will not be able to guarantee that conducting three individual interviews will take less than an hour in total (if your intention is being at the start of the council meeting as group).   Aside from obtaining everyone’s statement and perspective, any report of injury, medical bill, receipt for damaged property, or recording of the incident would be appreciated and valuable to your case.

Fellow members of my team were prepared to witness with me.

Thank you, We the People Rising! 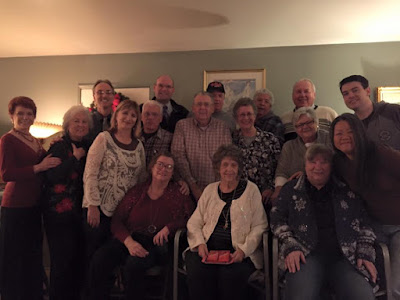 During the interview with the Lieutenant, he explained to me that even though an assault charge would not be warranted, another crime would apply: Grand Theft Person.

I had taken one course in criminal law--and I had never heard of such a statute.

Grand Theft Person is the crime of taking or stealing personal property of another, who is in lawful possession of the property.

I am holding onto the property, and the perpetrator is taking it from me while its in my hands.

This is a FELONY!

Here is more info that I received from the Lieutenant:

I believe we discussed it, but unfortunately I cannot find it in my notes.   Can you please provide the details of you cellular telephone.  Make, model, and cost.   Thx-

This information would further bolster the case for the filing deputy of the District Attorney's office.

Then the next email I received:

A quick update on the case.   Reports are prepared and ready for submittal to the District Attorney’s Office, minus a suspect interview / statement.   He is no longer working for the company, residing at the location on file with the DMW, nor does he have any other credentials listing a current residence.   I am going to make some further attempts to locate the individual over the course of the next week or two, before submitting for a warrant.

The suspect tried to get away!

FYI, I received that email on February 16.

It has been about two months. Honestly, though, that is pretty face considering that the crime was (at first, to me) a misdemeanor.

The Huntington Park police have done their part, and now everything is in the Filing Deputy's hands to choose what to do:

A quick update.  I was able to finally locate the security guard involved in the incident.   His statement has been obtained and all supplemental reports are completed.   I will be forwarding the case to the District Attorney’s Office for review this week.   Feel free to contact me if you have any questions.

I received this  update on March 13! Incredible! It's been barely three months, and already the case has been fully filed and in the DA's hands.

There is ample evidence. Ten witnesses provided their contact information for this case.

We the People Rising are fundamentally opposed to the lawlessness of this country and especially from officials in the state of California.

As the Trump Administration clamps down on the illegal immigration and its ill effects on our communities, the corrupt special interests who prosper and depend on this lawlessness are becoming more violent.

We cannot allow anyone to get away with crimes against any of us!

To all conservative activists out there--do not allow left-wing agitators and SJWs to commit crimes against you and others.

Do not hesitate to report these crimes to the local police.

Yes, this investment of time will reuire providing testimony to the police, and may lead to a day in court.

But it is so worth it!

And the more times that We the People stand up to this abuse, the more that these left-wing hatemongers and their supporters will cease attacking us!