The Norma Torres Town Hall exposed itself as a total fraud.

Friends of mine and members of We the People Rising were not allowed to enter the meeting, even after they wrote down their addresses to get a ticket.

Tressy Capps fought back and tried to get inside: 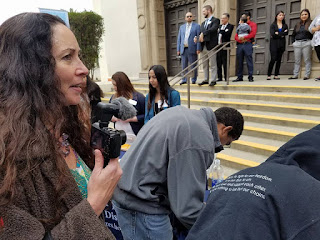 Check out her stealthy attempt to enter, too!

Despite our best efforts, illegal aliens Congresswoman Norma Torres and her staff kept us out. They have no problems with open borders for our country, but they insist on borders for their events.

What a sham hypocrisy.

They are also increasingly violent, with no regard for the rule of law.

This hideous woman, dressed up in purple, a vocal Torres support and illegal alien advocate, stole one of my signs and threw it away from me.

I confronted her vocally and immediately: 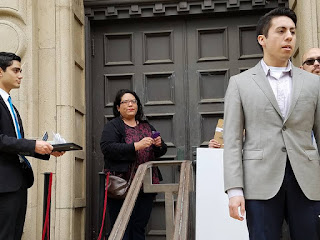 She kept screaming "assault" at me, as if I had done something wrong. 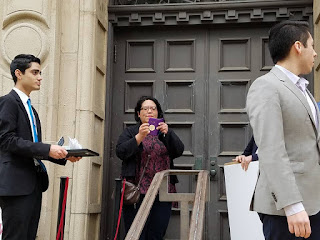 Yet she was the one who attacked me.


All her screaming and yelling could not silence We the People Rising.

I kept up the pressure on this purple monster:

She was clearly terrified. She knew that she had gone too far.

She attacked me. What she did was wrong.

She stole my sign. She defends illegal aliens, and she enabled illegal alien Congresswoman Norma Torres to silence protesting constituents and keep them out of the auditorium.

What was also entertaining? She kept trying to get into the auditorium herself, but she was trapped outside, and continually exposed for her abusive, criminal behavior.

I kept demanding the police to issue a citizens arrest report against this woman.

But the police did not comply--for whatever reason.

Eventually, the purple monster ran away:

I rest assured notwithstanding. These creepy, corrupt people do not get away with their crimes.

If We the People Rising are prevented from filing charges, at least they know that they will not get away with what they did in other forms.

Let's state the facts plainly: the lawless amnesty panderers have become desperate and fearful. They know that their fun time of violating our laws and abusing this country is dwindling. They need to get with the program, or the program will get them!