Here are my clips of the inanity and stupidity which took over the Culver City City Council Meeting on March 27.

The group wants to bring in Muslims, yet at the same time they want to provide a safe space for LGBT people: 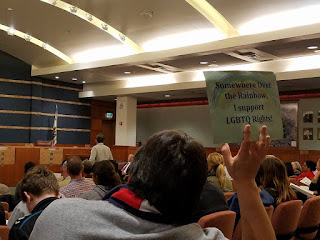 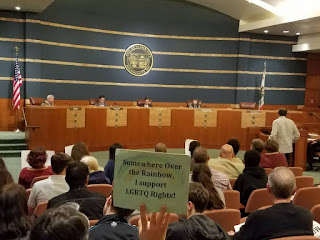 Has anyone in Culver City actually read the Koran? Are they aware of the hostile views held by this cult toward paraphiliacs? How about to Christians and Jews? What about to apostate Muslims or individuals who renounce Islam altogether?

Then check out what this creepy guy announced to the whole council:


Like the grand poobah of corruption in the state senate--Pro Tem Kevin de Leon--this man justified illegal aliens' use of false IDs and stolen Social Security Numbers "the only thing they did wrong was  too ..." steal someone's identity. This is total perversion. The lawlessness in this town is outrageous.

In this state, it has reached such a fevered height, that not breaking the law has become a form of deviance all its own.

Notice in the clip below that the pro-sanctuary city audience actually laughed when members of our time talked about the lives stolen from their families by illegal aliens:

Yet this is the heartless mindset of the illiberal, tyrannical, "diversity and tolerance at all costs" let.

No honor, no shame, no grasp of reality.

And this woman proves the depths of the sanctuary state stupidity:


The discussion only got more difficult for this backward, unthinking city council toward the end of the evening.

Just to let everyone know, the city could not precisely define "sanctuary city."

Here's a further discussion for how lost they were:

This is the status-insanity of the sanctuary city Left.

They are like little children, spoiled rotten who have gotten everything they wanted from their wicked parents--and now they are going to military school.

General Donald Trump is laying the smack-down on these unruly children, taking away their toys and their virtue-signaling lawlessness. How many of these states really think that they are going to get away with this abject, demonic folly? Cities like Culver City must really think that they can withstand not only the loss of federal funding, but the clear breakdown in law and order certain to follow.

What a say day for California that cities, both rich and poor, really think that they can violate/ignore federal law with no thought for the consequences.

This is a shame. A real shame!