In December last year, one month after Donald Trump became our next President, We the People Rising threw a party right next to Donald Trump's star on the Hollywood Walk of Fame.

Check out the festivities! 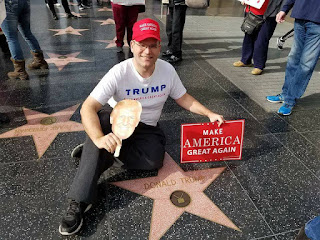 Check out some of the videos here:


Then an academic approached us.

We had it out over immigration and the policies which an upcoming Trump Presidency would bring to the United States.

But immigration and economics turned out to be the biggest point of contention:

Then last week, I got a phone call from a man named Michael Powelson.

I thought I had met this person at a Trump rally in Downtown Los Angeles.

In fact, it was the man who talked/argued with us on December 10!

He wanted me to speak to his class at LA Valley College!

Here was the email that he sent to me:

We met on Hollywood Blvd. during a pro-Trump rally and I'm emailing to ask if you would speak to my US History class at L.A. Valley College in Van Nuys (San Fernando Valley).

Most of my students are likely anti-Trump, but I have told them they must be respectful--as I too will be. You should be prepared for some tough questions, however. Although I disagree with Trump, I do not regard him as the monster portrayed by the press. I also hold Hillary in contempt, and I encourage you to criticize her as well. Since Trump supporters are few in the San Fernando Valley, I want my students to hear from someone like you, who I took to be thoughtful and serious about your politics.

The class meets every Tuesday evening at 7pm,and I can arrange for you to have a parking pass. You should plan to speak for 15-20 minutes and then field questions.

Let me know if this is satisfactory, and you are welcome to come next Tuesday if you'd like.

This opportunity is something that I have been waiting for ... for years!

It's time for conservatives to start storming the blue areas and  making the case for Trump, for free markets, for free enterprise, and free people.

No one is going to win over young voters are take on the next generation until we start going there and talking to people. What else does anyone expect to happen?

This visit turned into a great chance to hear the points of view from young people. especially those hearing nothing but a hasten, illiberal narrative. After all, Dr. Powelson affirmed his very Marxist views during our debate next to the Trump star.

I was happy to attend his class.

Of course, three other members of We the People Rising went with me. Their presence there helped me to make the case for Trump to a very progressive audience. I would love to see Ben Shapiro try that!

Just as a reminder: Los Angeles Valley College is in Van Nuys, which meant an extended drive out of the South Bay to the Valley -- but we still love LA!

Who went with me? 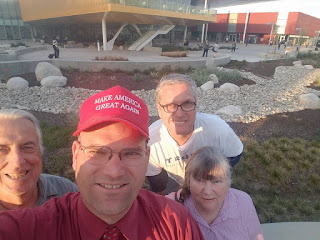 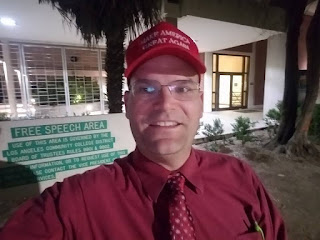 Here is our first video walking on the campus!

We the People Rising settled int the class: 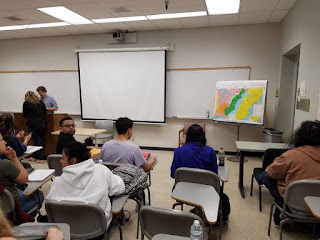 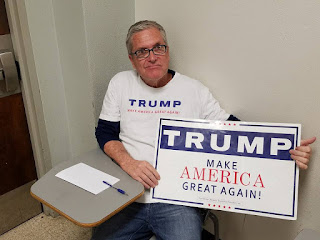 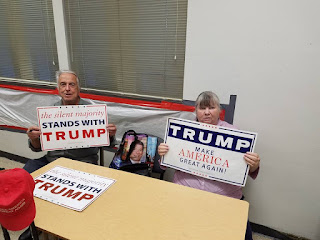 Here is the first video, as Dr. Michael Powelson introduced me and the rest of the team:

Then I jumped right in.

I did not mince words, but announced my welcome support for President Trump. I am certain that members of We the People Rising would have never imagined my saying what I did that day. Even after Ted Cruz dropped out in May, 2016, I was still hoping for a brokered convention.

So, why do I support Donald Trump? Here's what I had to say:

Here were the first set of very controversial remarks which I shared with the class:

It's deeply disturbing to me that college students compare Christianity and Islam, as if they are the same.

I was not afraid to touch that third rail of political discussion.

Should we think about banning Islam at this point?

Then the discussion turned to immigration. I found myself repeatedly having to determine if the students were talking about legal or illegal immigration.

The latest trend from the university set and the regressive left is to blur and then eliminate the distinction between legal and illegal.

The students had strong remarks as well as question about my views:

One of the students asked more basic uestions, like "How are you?"

I spoke at great length about spiritual issues and uesitons. I found myself preaching about the Old and New Covenants, versus Islam and its fanatical demands for full adherence, or death.

Abortion came up, along with ontological discussions about creation, God, and the soul. Professionals in the class challenged my definitions on legal and illegal immigration, but I was not going to cave in.

I enjoyed this sharp exchange of ideas!

Here is the last video of my discussion with the students:

One student actually claimed that Donald Trump is taking this country backwards.

The spikes of racism and conflict throughout the country do indicate that there are problems plaguing this country.

However, all of this racial strife and conflict about illegal immigration did not start with Trump. It's all Obama's fault, the same President who played the weak fool to the Arab nations, who did nothing while ISIS overwhelmed the Middle East, who routinely threw Israel under the bus, and who sponsored and fomented ethnic hatred among Americans.

Most of the students did not agree with me. but that's OK.

At certain times throughout the discussion, Janet, Mike, and Robert chimed in with answers. I am so glad that they were there.

We had a few other comments to share about the campus as we left for the evening:

Before we left for the evening. we stopped by the Free Speech area to take a photo, and pledge to expand its borders. 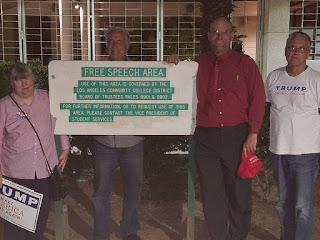 Once again, the invitation to speak to college students about Donald Trump was the chance of a lifetime.

It's really exciting to make the case for your President, even when those listening do not agree with me right away. Conservatives, pro-Trump advocates, need to step up and speak up to the next generation. All too many of them are getting left-wing lies, and they are being told by their liberal professors.

In the meantime, let's confront and dialogue with the students. There is no better way to get young people to start thinking about what they are learning, and what they are thinking.

Let's get out of identity politics, and let's start identifying the political narrative and agenda sweeping through universities throughout the country.

And let's start with LA.

Let's Make California Great Again. Why not start by making the case to college students?!
Posted by Arthur Christopher Schaper at 5:46 PM