The Boston St. Patrick's Day Parade had achieved significant success in pushing back against the homosexual lobby.

Now, lo and behold, when the Boston Police Department declared to the organizers that they could not guarantee safety because of the parade and the attendees.

This is extortion and hate at its worse.

Please do not lecture me about "Love is love" and "LGBT is A-OK".

Put the corrupt, bullying Mayor Marty Walsh and tell him to stop harrassing Boston residents and all people of faith who oppose the LGBT Agenda in its fullest:

Boston Police would not guarantee safety 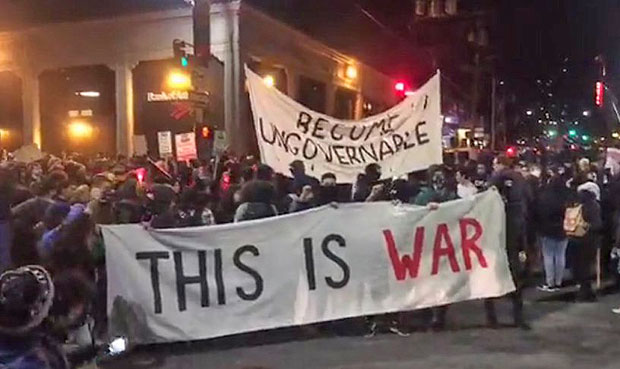 Left-wing mob rioting, burning, destroyng property in Berkeley, CA earlier this year. This is what was threatened for South Boston unless the parade organizers gave in.
This Sunday the annual Boston St. Patrick’s Day Parade will march through the streets of South Boston. It will not be a happy time for the parade organizers. Normally, if a private parade votes not to include a particular group, it’s so insignificant that no news organization would care. But since it’s a homosexual group trying to get into a Catholic parade, the liberal establishment went haywire. The wrath and fury of the mainstream media, major politicians, big corporations, and ultimately national activists was turned on the group of Catholic veterans in charge of the parade. 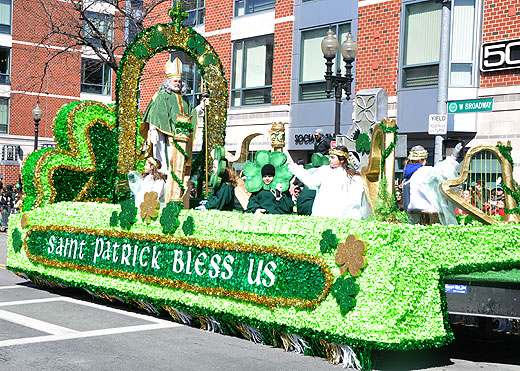 The iconic St. Patrick float that's traditionally a high point of the parade for children. [All photos except top by MassResistance.]
It’s important that people understand how aggressive the anti-Catholic, pro-LGBT furor has become.
Over the past few weeks, the leaders of the Allied War Veterans Council (who runs the annual Boston St. Patrick’s Day Parade) had been continuously and viciously attacked in the Boston media, by major Boston politicians, and other groups. Corporations were threatening to pull their financial support.
The firestorm was over the Council's refusal to include an overtly homosexual contingent in their pro-family Catholic parade. Through all of that, the Council members stoically stuck to their principles.
Then suddenly, on Friday afternoon, March 10, Tim Duross, the main parade organizer, announced that they’d changed their minds and they are now welcoming the openly homosexual group to join the parade.
Why did Duross do that? The media’s narrative is certainly gratifying to them: That the liberal establishment’s pressure, intimidation, and extortion tactics made the Council leaders “see the light” on diversity and inclusion. But that’s not the whole story.

What the media didn’t report – threats of large-scale violence

But here’s what the media has not reported. The parade organizers had every intention of holding to their principles. They only agreed to include the homosexual group after threats of widespread violence -- and possible deaths.
On Friday afternoon, March 10, a few hours after Duross’s announcement, Philip J. Wuschke, Jr., a former Council Commander and lifetime Council member, called MassResistance. He said that Duross had told him that the Boston Police Commissioner’s office had warned him that busloads of LGBT activists from other states were planning to come to Boston to protest the parade and disrupt it. Furthermore, there would likely be violence and even possible deaths.
The police strongly implied that they could not contain such violence – and that Duross would be responsible if it happened – unless he allowed the homosexual group to march. Otherwise, the police would probably have to cancel the parade.
To corroborate this, we spoke at length with Bill Desmond, the Council Commander. He acknowledged that the threats of violence were what caused the parade to give in to the homosexuals’ demands. Desmond told MassResistance that he had intended the parade to be family-friendly and in keeping with the message of St. Patrick and traditional Catholicism, and they had been prepared to stand up for that. But they couldn’t risk the violence – and they didn’t want to cancel the parade at this late date.
We then spoke directly with the parade organizer, Tim Duross. He told us that the threats had been discovered through various social media, and that he had met with the Police Commissioner, who said that the threats were real, that busses of activists would be coming to converge on the parade – similar to other recent organized riots around the country – and this need to be taken seriously. There seemed to be the implication that the police would not be able to contain it. “If anybody got hurt because of this, I wouldn’t be able to live with myself,” Duross told MassResistance. He said that he felt he had no choice but to let the homosexual group in.
Duross said that he had also been personally targeted with harassment and threats.
As expected, the major Catholic groups have now dropped out of the parade. According to Duross, this includes the Immaculate Heart of Mary School, with their iconic St. Patrick float, the Knights of Columbus, the Hibernians, and several others.

Background to the 2017 battle

Since winning a 9-0 US Supreme Court ruling in 1996 guaranteeing their constitutional right to include or exclude anyone, the Allied War Veterans Council has been determined to keep the parade’s Catholic character in honor of St. Patrick, the patron saint of the City of Boston, and its intention to entertain children. None of that meshes with homosexual activism. This has, of course, enraged the Boston liberals in power. 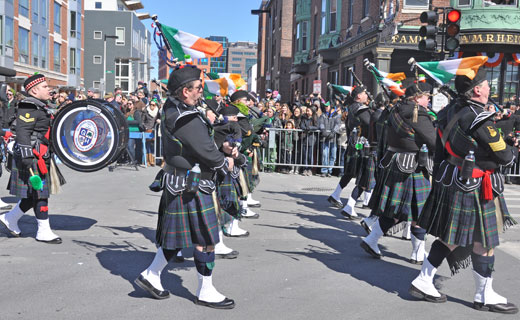 This is the kind of marchers the organizers want in the parade.
In 2014, newly elected Boston Mayor Marty Walsh put the full force of his administration against the parade organizers. According to reports, this included threats to pull the parade permit, and threats against city employees involved in the parade. It also included a profanity-laden screaming session by the Mayor against one of the parade organizers at a public event. But the organizers would not cave in, and the parade went on as planned.
Then, in 2015 and 2016 the homosexuals were able to get an LGBT “veterans” group, OUTVETS, and two other LGBT groups into the parade. A turncoat Council Commander, Brian Mahoney, colluded with the political establishment. Mahoney was able to bring LGBT groups into the parade by corruptly holding an unscheduled meeting for the vote that excluded many Council members.
As a result, in both those years all of the various Catholic groups refused to be in the parade, including the parade’s signature St. Patrick float by the Immaculate Heart of Mary school.
By all accounts, OUTVETS is a contrived group of Boston city employees created in late 2014 by Mayor Marty Walsh specifically to be a homosexual “veterans” presence in the St. Patrick’s Day Parade. It has not been established whether all the members are actual military veterans. 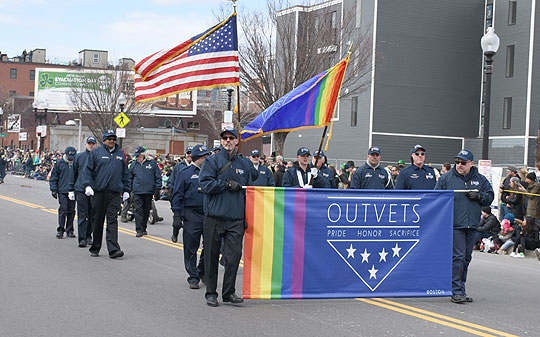 This is what they're now being forced to have in the parade.
But in late 2016, Brian Mahoney died, and Bill Desmond took over as Council Commander. Desmond is strongly pro-family. So there were no more phony meetings.
Also in 2016, the Council’s attorney, Chester Darling, filed a an injunction in Federal District Court against Boston Mayor Marty Walsh from attempting to interfere with the parade, by threats, political pressure, or other means. (Darling is the same lawyer who won the 1995 US Supreme court ruling.) Unfortunately, a left-wing judge federal judge refused to let the case go forward. But it made a statement that the Council was serious about standing up to the politicians.

The parade organizers were determined to hold firm

On Tuesday evening, March 7 the Council voted overwhelmingly to exclude OUTVETS in the parade. OUTVETS was the only LGBT group that had applied to march, but had missed the official application deadline by a day. Still (as with other late filers), the Council agreed to take a vote on admitting them. The vote was 11-4 against (not 9-4 as reported in the media).
The decision ignited an immediate firestorm in the Boston Globe and the other mainstream media against the organizers. Politicians, including the Governor and the Mayor of Boston, also went on TV and radio and to blast the Council and vow not to march in the parade. Several corporate sponsors, including Budweiser, dropped out and even the Grand Marshall (an employee of Mayor Walsh) said he wasn’t going to attend.
The politicians even absurdly claimed that excluding OUTVETS was a move to dishonor all veterans, even though other veterans groups, such as the political protest group “Veterans for Peace,” had been excluded for decades.)
The only things we found that supported the parade organizers in the mainstream media tsunami was an op-ed by Atty. Chester Darling in the Boston Herald and a radio segment by WRKO talk show host Jeff Kuhner.
But the organizers continued to hold firm. The Catholic groups were all planning on being back in the parade. On Friday morning, March 10, Tim Duross told Br. Thomas Augustine of the Immaculate Heart of Mary school that he plans to “stand with St. Patrick” and hold firm against all the pressure.

But then suddenly everything changed.

That afternoon (March 10), Duross announced to the Boston media that he had decided to let OUTVETS march in the parade “unconditionally.” They could even wave their rainbow banner. It was shocking to everyone, on both sides of the issue.
And so the Boston media and local politicans exuberantly celebrated it as a “victory over bigotry.” The rumors are now that OUTVETS will even lead the parade. Congressman Stephen Lynch flew up from Washington to meet with a group of veterans in a South Boston VFW hall (which was not affiliated with the Allied War Veterans Council!) who took a phony unanimous “vote” to “officially” allow the OUTVETS into the parade. Nevertheless, Lynch was later congratulated on National Public Radio for helping “fix” the parade.

Despite the intense coverage of the OUTVETS issue by the mainstream Boston media, the true reason – the threats of largescale violence and possible deaths by outside agitators and the police warnings – is being completely ignored.
We tried to get the facts out. On Thursday morning, March 16, the Catholic Action League of Massachusetts and MassResistance issued a detailed press release about these threats that was distributed throughout the Boston and Massachusetts media. So far not a single news outlet has shown any interest in covering this.
What also makes this frightening is that the Boston Police have a history of allowing violent left-wing and LGBT activists to terrorize the public while standing nearby and just watching. In none of these cases did the mainstream media make a peep. Some examples: (1) Homosexual activists throwing condoms on priests and jumping on cars outside of Boston’s Holy Cross Cathedral in 1990; (2) The riot outside of Tremont Temple in 2005; (3) Allowing the 2011 Occupy Boston movement to take over parts of downtown Boston and march through the streets at will. (4) LGBT activists marching in and terrorizing a Tea Party meeting on the Boston Common in 2012;

This is what pro-family Americans are up against

We are thankful that the leaders of the Allied War Veterans Council were willing to stand up against the hateful and barbaric attacks on them for daring to have a traditional Catholic, pro-family parade. As far as we know, every other St. Patrick’s Day Parade in the country buckled under and caved in long ago. Although we understand their strategy of  publicly insisting they want to be “inclusive” and “not discriminatory” (rather than stating that homosexuality is considered to be “objectively disordered” by Catholic doctrine), we don’t think that strategy is sustainable.
As we’ve said before, our observation has been that, similar to dealing with classic bullies, the Left’s (and the LGBT movement’s) behavior against pro-family citizens gets worse and worse as we become more passive, compromising, and non-confrontational when attacked. We fear it will only get worse unless that strategy gets modified.


Most of the Council members we’ve talked to are rock-solid in their beliefs. We’ll see what happens next year.
Posted by Arthur Christopher Schaper at 2:38 PM