So Professional: Fake News Asian Journalist Unhinged, Calls Me "A--Hole", Sticks Tongue Out At Me

The pro-Breitbart counter-protest hosted by LA for Trump was fun and frolic for our side, even though the regressive left all over Los Angeles County is gone from deranged to outright dangerous.

All around the protest, I ran into reporters, recorders, and left-wing newsies searching for any angle to push an anti-Trump, "progressive" narrative.

But this one reporter was a a real shocker, and a joke until himself.

Kim Shin, who according to one commentators is an openly gay Asian journalist:"Gaysian Journalist"?

What is the matter with these people?!

Then he tried to deny that he called me a nasty name periodically throughout the protest.

The second time that I recorded him, he got really angry.

This reporter, reporter badge and all, stuck his tongue out at me! 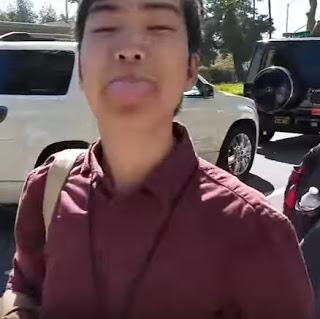 He even started twitching:

Then he tried to hide his press badge!

He also called me ugly (why was he looking at me that way?)--and I still called him "Fake News".

Moral of the story--don't let the hateful, biased press get away with lying, cheating, stealing, or demeaning you.

EVER!
Posted by Arthur Christopher Schaper at 12:48 PM