The modern Democratic Party has been taken over by communistic infiltrators.

They have completely lost their minds, holding onto patterns of lies and false narratives. They routinely announce that Donald Trump is a puppet of Russia and Putin. Yet they have no evidence to justify this assertion.

They claim that the Russian government intervened in our Presidential election last year, when the truth is that the Democratic National Committee was engaging in massive corruption within its own ranks, and then the leadership of the party had prepared some of the weakest firewalls, so that the right people with dedicated effort could hack the system.

Now they are claiming that Breitbart is some kind of Alt-Right propaganda machine.

That insinuation is not only false, but libelous. Do they have any shame?

Even worse, the Anti-Breitbart forces actually believe that Steve Bannon, who had served as the Chairman for Breitbart News, is some kind of anti-Semite.

Check out the posters at the protest on March 12: 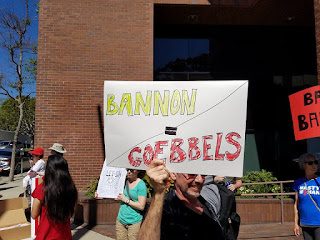 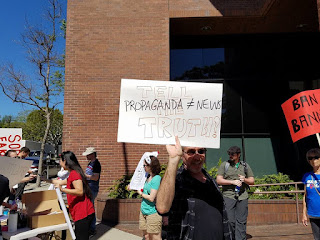 But I refused to let this confused liberal get away with such an offensive, false, and very demeaning statement.

Is he actually accusing Steve Bannon of collaborating with the Nazi regime to get rid of Jews?

Here is my attempt at an interview (which he was not happy to provide, for whatever reason):

This man was pushing the same false analogy that many liberals have tried to get away with: that anyone who is opposed to the left-wing agenda of Barack Obama and his presumed successor Hillary Clinton is a right-wing fascist.

What is deeply disturbing, however, is that Breitbart News has become the foremost source for learning about the state of Israel and what the Jewish people are facing and fighting in the Middle East.

Most of the "mainstream media" refuses to give a fair-sided report on the state of Israel. Groups which claim to oppose tyranny and oppression often take the sides of the terrorist Palestinians and ignore their ideological-ethnic hatred for Jewish people and the Judeo-Christian worldview.

The most unkindest cut for this hateful analogy?

Bannon cares about Jewish people and continued Andrew Breitbart's attacks against Anti-Semitism. but left-wing reporters, protesters, and activists continue to claim that Bannon is equivalent ot a rogue propagandist who helped killed 6 million Jews and 7 million other undesirables.

This is the Modern Democratic Party, the New Left which is really the old Communist Party hell-bent on destroying this country and reducing every to an equality of abject poverty and despair.