I have seen this college student at Trump rallies before: 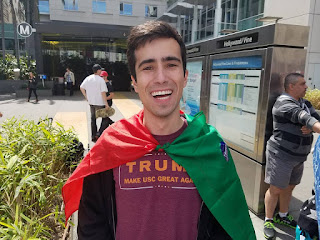 Whether most people noticed or not, this young man joined us at the January 29 pro-Trump counterprotest at LAX!

I was really surprised, especially because he is a USC undergrad, and that school--for all its private school pretensions and tuition costs--is cracking down on freedom of speech like never before.

But he was unafraid!

He also joined us at the March 25, 2017 Vine to Highland Hollywood March.

This was really something! 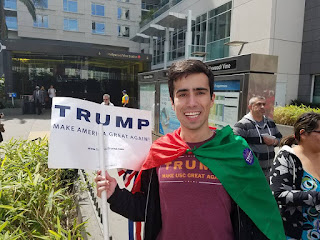 Check out his statements below, why he is a Trump supporter, even though he is not an American citizen and therefore cannot vote for him. Pay close attention, to his explanation how his native country has avoided the mass immigration/refugee problem which has plagued other countries in Europe:

Posted by Arthur Christopher Schaper at 9:10 AM