Result, Verdict, and Reflection on the NRCC's 2016 Donkey Awards

Election year 2014 was an ambitious, welcomed sweep of the country, particularly for the United States Senate. Republicans picked up nine seats, including five ousted incumbents.

What will happen in the House of Representatives depends on better targeted, and registration efforts in key states for 2018.

Now, back to the Donkey Awards.

The site was called the 2016 Donkeys, mimicking the  Academy Awards.

Here is the first section:

For Most Likely to Be One-and-Done

This category has a tinge of irony to it.

Illinois-10 is the district/region which former US Senator Mark Kirk had represented for ten years before winning the US Senate in 2010--the Tea Party wave which gave Republicans the upper hand in the House and brought them within four seats of capturing the United States Senate.

How well did the NRCC do on this list?

Gwen Graham dropped out and announced her bid for Governor of Florida. A Republican picked up her seat in 2016.

Verdict: Republicans recognized that Nebraska Democrat's win in 2014 was a total fluke. With more attention and resources, they brought the seat back into Republican hands.

For the most out-of-touch liberal record

The irony strikes again. Carol Shea-Porter won back her seat from ethically challenged New Hampshire Republican Frank Guinta. He was caught in campaign finance violations. He should have stepped aside.

Hopefully, he will not run in 2018, and another Republican will push Porter out of the seat ... again.

As for the four candidates listed ..

Ann Kirkpatrick ran for the US Senate against John McCain, and she lost. Another Democrat ran for her seat and won. The Republican, Paul Babeu, was a successful county sheriff, but the political demographics of the district and his private life and views hindered his chances.

Rick Nolan won re-election in Minnesota, but it was extremely close. I believe that a Republican can unseat Nolan in 2018. The state is turning Republican underneath its longer Democratic surface. The Minnesota GOP now controls the state legislature, and 2018 is a prime opportunity to bring in a conservative governor and reshape the state culture for a 2020 Trump re-election win.

As for California, the Golden State still so out of reach for Republicans ...

Raul Ruiz of California crushed his opponent, State Senator Jeff Stone, who jumped into the race in January 2016 after Republicans had struggled to find another candidate to challenge Ruiz.

Julia Brownley beat down her challenger, former police officer and marine Rafael Dagnasses. It was not even close, and Brownley skipped every debate with her opponent!

Verdict: Minnesota is a prime target for flipping a seat, but California is turning into a lost cause. Two California seats were targeted, and both of them fell through. The Prop 14 Jungle Primary is a total failure ruining Republican chances in the Golden State.

Targeting open seats is a good strategy, though, but registration still matters.

First, the good news. Tim Bishop of NY-1 lost in 2014, and he stayed lost. Lee Zeldin won this seat after six years of Republicans chipping away at Bishop's hold on the Long Island seat. The fact that Zeldin held onto the seat in a Presidential year with all of its controversies is a true testimony to Republicans flipping the seat and keeping in in their column.

As for the targeted incumbents ...

Elizabeth Esty of Connecticut trounced her GOP opponent, although that race was the closer than the other five Congressional seats (57-42).

The current Democratic governor is deeply unpopular as well as polarizing. Dannell Malloy is routinely referred to as "a jerk." The Oak State is ripe for a GOP take-back, especially as local Republicans are gaining more seats in the state legislature. They are only four wins away from control the State House, and the State Senate is 18-18 split.

Then there are the Two Democrats in California, and both of them lasted. Scott Peters' victory was particularly demoralizing, since he represents a district which is evenly registered Republican and Democrat, a seat which GOP Brian Bilbray had held for a steady period of time. Garamendi is a state fixture with statewide ties. He can always tap into big money as needed.

Maloney represents Western New York. He held on by a 55-45 margin. This seat could still be targeted, with the right attention, ground-game, and resources.

For the Most Two-Faced Politician

For background on this category ..

Another Calfiorna Democrat! Everything was against him this time. His district is evenly split. Progressive Democrats rejeccted him. He had to appeal to the state party for an endorsement.

His father went to prison for campaign violations.

He was running against the well-known and well-liked county sheriff Scott Jones.

Cheri Bustos represents a northwestern district in Illinois. The margins were not close enough to justify challenging her again.

But Collin Peterson ... he barely held on this time. Again, another run at this guy and he will be toast in 2018!

Most likely to run for Senate, lose, and leave an open House seat

Patrick Murphy ran for US Senate against Marco Rubio. The former Republican presidential contender carried his state by a wider margin than Donald Trump!

As for Sinema, she retained her seat in Arizona

Chris Van Hollen is now the junior US Senator from Maryland. He now leads the doomed effort to help Democrats gain US Senate seats in 2018.

Just one look at the map, and you will laugh louder than the Republicans did in the House following Nancy Pelosi's re-election as minority leader.

Congressman Israel stepped down in New York State. The bid to win his seat was pretty close this year .. 52-48. Will Republicans be able to win in 2018?

Ben Lujan breezed through to keep his seat in New Mexico.

Verdict: Republican targets need to micro-target those seats. Which Democratic candidates/incumbents carried their districts with minimal margins of victory from county to county? For now, Republicans might have to avoid incumbents in urban regions--until public sector unions are tamed and lose their power to force membership and coerce union dues.

The RNC needs to give Minnesota a lot of love and attention. The Land of 10,000 Lakes now stands where Wisconsin and Michigan did. Today, those two Rust Belt states are a nice shade of pink turning redder by the minute. Minnesota is next. 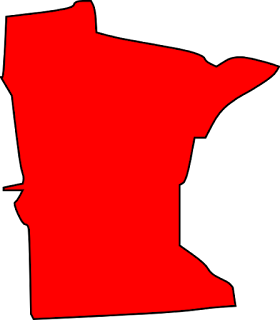 1. Minnesota is the Democratic stronghold that is going to go Republican next.

2. Missouri should get more attention from the Republican Party. Both the governor and the incumbent US Senator Roy Blunt won their races, but by very close margins.

Another US Senate seat will be available, since Claire McCaskill is in big trouble (she didn't even bother running for the open gubernatorial seat). One Congressional seat might be worth the extra attention, in the St. Louis area, and the Democratic incumbent only carried the seat by 55-39.

2. Illinois Republicans gained seats in the state legislature, despite the Democratic tilt of their state (really, Chicago's looming population pre-eminence and corruption

As a California conservative Republican and activist, it grieves me somewhat to say this, but until Big Labor loses its Big Money machine power, California is not going to be a safe or winning bet for picking up seats.

California Republicans need to get their organization together. Most conservatives believe that wise and necessary reforms will make California a swing state again:

For 2018, the National Republican Congressional Committee should focus on these states:

1. Minnesota
2. New York
3. Missouri
4. New Hampshire (Guinta's loss was close, and the GOP trifecta at the state level will make the state more conservative and GOP friendly for 2018)

If other states are viable, that will depend on the federal policies, reforms, and victories enacted in Washington DC.