Supervisor Janice Hahn is one of the most corrupt liberal politicians in Los Angeles County.

She has been living off the state in "state sponsored" elected office since 2001.

Reporters have confronted her about a gang program she was involved in in 2008. She threatened to walk out on an interview, refusing to acknowledge that she was working with known gang members, who then woud serve as liaisons with other gang  members in the Los Angeles area.

She ran again in 2011 in a special election. She relied on dirty campaign tactics to attack Craig Huey.

Check out her comments here:


For a woman who talks about public service, she seems to have a funny idea about what it means.

Does public service meaning serving yourself at public expense? It seems that's what it means to her, since she is more interested in helping illegal aliens rather than the law-abiding citizens.

But the campaign for this office was sordid at the outset.

I learned that thieves broke into Craig's office and stole a computer which contained all his campaign information! There have been no clear ties drawn to connect this theft to Hahn, though.

From the Congressional seat along the South Bay, Hahn carpetbagged to the 44th, which ran from San Pedro to South Gate. She ended up fighting Laura Richardson for that seat, and blew her out of the water.

Supervisor Don Knabe later announced that he was retiring (Actually, forced out because of term limits).

The year 2016 would be Aunt Janice's year. She pretty much walked away with the 4th Supervisory district, since the region along the Southern borders of the County was tilting Democratic anyway.

She had endorsements from Big Labor and other special interests.

Now she is doing the bidding of La Raza and the open borders lobby.

During her first meeting as a Supervisor, she joined with her liberal colleagues Hilda Solis and Sheila Kuehl to seek any means necessary to shield the illegal aliens in the County of Los Angeles from deportation.

What would Kenneth Hahn say to his daughter Janice?

She even declared to the assembly in the Board of Supervisors meeting hall, that she would be ready to build a big wall around LA County if necessary.

Well, We the People Rising are not going to tolerated this misuse of time and taxpayer funding.

Who is paying for all of these benefits to illegal aliens? We are.

Who pays the price when an illegal alien commits a crime? WE DO.

Janice Hahn's satellite office is located on Willow Street in Signal Hill, California. Driving through the city, anyone can noticed a marked difference between Signal Hill and Long Beach. The latter city has become dirty and overcrowded, while Signal Hill is open and clearn.

Robin Hvidston, the Director for We the People Rising, led our efforts.

Here is our first video:


Robin showed all of us the text of the illegal immigration shield program.

Don't mind Wes! He was our Santa Claus along the Walk of Fame, and he joined us today to make fun of the liberal lunacy dominating Janice Hahn's office! 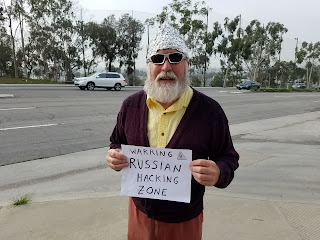 Robin invited a Japanese Television  news crew to record us at the event. We intend that our efforts will be well-known throughout the county. 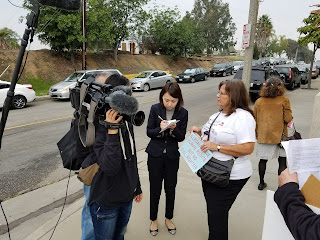 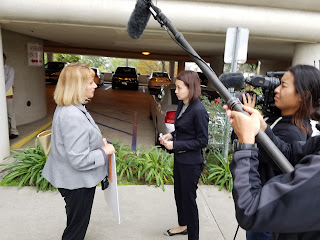 First, we assemnbled outside of Janice Hahn's office. We declared our intentions to inform the Supervisor that she should not pursue that outrageous policy. She needs to think about the needs of Americans, especially the disturbing number of homeless on our streets.

Two legal immigrants joined us at this office visit, including Agnes Gibbony, whose son was killed by an illegal alien.

Agnes talked about what she had to do in order to become a citizen of the United States, then Chanell Temple talked about the vicious and unfair double-standard of the legal system:

This is beyond tragic.

Such terrible deaths should never happen in this country.

Here are my preliminary comments to "Aunt Janice":

In this video, We the People Rising walked into the building to confront Janice Hahn's staff:

In the office, we noticed that the staffers were just starting to set up the office.

Here are our videos detailing everything about her:

Check out this video, too!


In this video, I spoke out against Janice Hahn's interest in protecting all the illegal aliens in Los Angeles County.

I later commented that Aunt Janice should speak to the parents of Tierra Stansberry. Tierra was burned to death in an abandoned warehouse in Los Angeles.


Where was the wall to protect Tierra?

Then this video, our last comments before we left Aunt Janice's office:

How strange indeed, then, that the Supervisor wanted to push through such an offensive and overbearing policy so quickly. Her office staff are not even prepared for guests and constituents!

The staffer who met with us was very rude! She rolled her eyes a few times and got snippy. But I told her off and said "Stop being rude!"

After all of us left the building, Robin gave a further account of our event to the Japanese media.

Janice Hahn is going to endanger our county law enforcement as well as every legal resident.

What is the matter with this woman, putting the needs of illegal aliens head of legal, law-abiding citizens?

What would her father Kenneth Hahn have to say?

We the People Rising remain undeterred!

We will not tolerate our tax dollars used to pay off protection for illegal aliens while the needs of our citizens are denied and rejected. 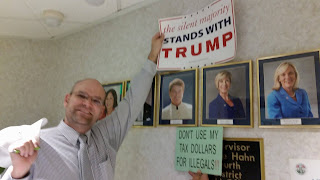 Shame on the Los Angeles County Board of Supervisors for pushing this abusive nonsense. 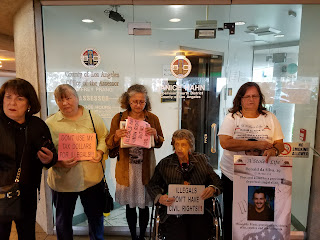 What about our poor, our homeless? What about veterans? What about the basic necessities which the county must provide for all citizens?

Contact the Los Angeles County Board of Supervisors and demand that they rescind any kind of policy which will "protect" illegal aliens from deportation!

Don't use my tax dollars for illegal aliens! 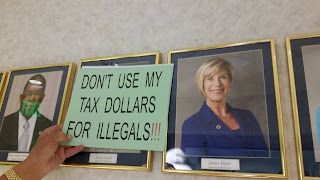