We the People Rising are not intimidated by rogues and thugs.

Even though Los Angeles is hostile territory for Republicans, and for Donald Trump supporters in particular, we celebrated Trump's victory, and held nothing back.

The drivers for the company "Town and Country" parked next to the Donald Trump star along the Hollywood Walk of Fame.

They were playing a rap song with the refrain "F--k Donald Trump." 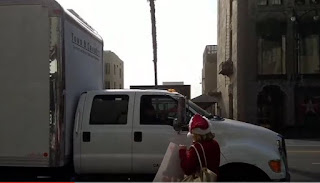 Instead of getting angry or frustrated, we started chanting "Vote Donald Trump!"

Then we recorded to the drivers in the front of the truck.

One of them got really upset and tried to discourage us: "Stop recording me! You can't record us!"

Too bad! It's a public place, I reminded him that he had only himself to blame. 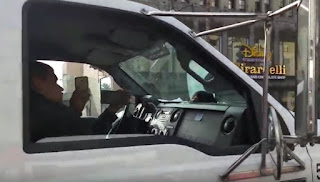 Rogue Matthew, a Trump supporter from the Inland Empire, called "Town and Country" to report the rude workers. He told that we were going to report teh rude behavior of the company and launch a national boycott if they did not drive away.

Robin also reported the bad drivers and the foul song playing on the radio.

And soon after ... the truck drove off!