Thank you so much, little House Democratic Caucus?

Because you have anointed The queen of Haight-Ashbury to be your minority leader—again—you have embraced your diminished relevance with a zeal that cannot be replicated.

After fourteen years, and ten of those years in the minority, one would think that the Democratic Party would wake up and recognize that their leader is a total loser.

At least Congressman Tim Ryan (D-OH) was trying to bring some sense and centrism back to his party. Then again, as Pelosi—fresh off her re-election win—sniped, he could not carry his own Congressional district for Hillary Clinton. Also, Congressman Eric Swalwell, another Democrat on the other side of the Bay Area (Alameda, Dublin, Crazy-town) acknowledged that there is something seriously wrong with the Democratic Party’s message. 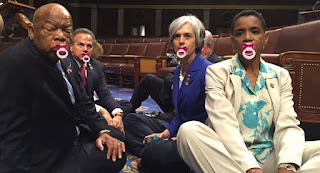 Not just how they say it, but what they are pitching. Ouch!

Let’s state some facts plainly. The communist-socialist-coastline-elitist wing of the party has taken over. Sadly, the most active partisan progressives also come from that region. It’s a big difference for the Republicans, in which grassroots conservatives do not share the same donor base or even necessarily the same geographical location. Republicans in the same liberal-leaning sections of the country raised money for Hillary Clinton (Meg Whitman) or refused to endorse Trump.

The Democratic Party has a serious problem.

And there’s more to their “All of it!” lack of messaging.

They still claim that they haven’t explained themselves enough. “The problem, you peons of Middle America, is that you just do not get what we are trying to give you.”

Actually we understand, and We the People do not want you.

However, the liberal loonies who represent the Democratic Party are not just old and out of touch with … everything. Nor that there is something wrong with any of their arrogant, elitist political views. They still believe that raising lots of money is paramount—for people or policy. Pelosi lives on Billionaire’s lane in San Francisco, and can tap George Soros and his fascist ilk at a moment’s notice. Add to this financial largesse the labor unions, and it’s crystal clear why Democrats are staying with Sugar Mama Nancy. Besides, President Barack Obama ran on his hyper-globalist, anti-nationalist Democratic platform, did he not? How could he have gotten away with all of it, and drag down the entire Democratic Party with him?

First, people just liked Obama. They thought he was refreshing and trustworthy. Also, the bad, sad face of Big Government Republicanism had reared its ugly head for the last two years of the Bush 43 Presidency: Big Bank bailouts and an extended military stay in the Middle East, coupled with a housing crisis and a depressed economy. Contrast Bush-Republicanism with Trump-Republicanism, and how the Donald’s Administration-to-be has already ushered in a stronger economy. The man has not even taken the oath of office, yet managed to keep a major company in the country!

But back to the Democratic debacle, and how Obama rose above it for eight years.

Democrats seized on the above-mentioned Bush-GOP hypocrisy and swept every branch of Government. Then came the Tea Party to break away the undue influence of Big Business. They demanded back-to-basics government, and their influence continues. Democrats need a similar turnaround. But for that, they would have to come to grips with inconvenient truths, in fact many of them:

2. American voters do not like being called racist, sexist, homophobic bigots. 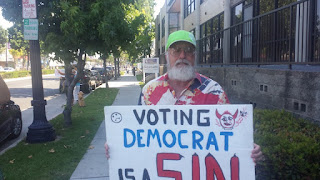 3. Americans oppose open borders and amnesty. They want enforcement of the law.

4. The average voter is actually a lot smarter, more in touch with the limitations of a fallen world and how to overcome them, than the elected officials who seek higher office to “help us.” As William F. Buckley had suggested about the leadership of Boston Massachusetts, any one hundred names drawn out of the phone book would have better managed the city than a prim and proper set of politicial fresh out of the Kennedy School of Government.

Obama got away with his thinly veiled disdain for all things American because of his charisma, his black skin, and the utter disregard which the nation as a whole had with George W. Bush.

He pushed his agenda by executive fiat, too.

Whatever Barack Obama had, did not transmit to Crooked Hillary or the Democratic Party as a whole. I know middle-income and moderate Democrats in California who voted enthusiastically for Obama. Eight years later, they acknowledge their mistake.

Even in West Virginia, where the Democratic Party candidate held out to win the governor’s seat because of tradition and personality, he is edging ever closer to the left in a state—and country—moving further right.

I had mentioned that the Democratic Party has become a regional party, decimated throughout the country, from the city council to state legislature. Then again, further losses suggest that the Democratic Party is worse off (but won’t admit it). Even in deep blue Vermont, a Republican Governor will have be the adult in the room and tell the legislature—No, we can’t keep spending money that We the People do not have. I only hope that Governor-Elect Scott is a team player. Massachusetts has a RINO Governor (but he has not dropped the R, and is not totally caving to Beacon Hill Democrats).

Too bad the Democrats have not figured out their own mistakes—or simply refuse to. They got away with advertising themselves as the party of the Working Man for decades, while slamming Republicans who refused to say anything. Now, Democrats are the quintessential Wall Street sellouts which they had railed against. This time, the mainstream media cannot cover (and cover up for) the Democrats’ duplicity and bad campaigning.

The Democrats have doubled down on their lunacy, which means that their festering version of domestic anti-American communism is going nowhere fast.

And I say “Hurray!”
Posted by Arthur Christopher Schaper at 10:10 PM