The worse kind of unions? The public sector ones like the Service Employees International Union.

They have taken over streets. They harrass passers-by.

Members will walk into traffic and stop shoppers from entering buildings.

In California, they threatened to call another strike demanding more money.

Governor Brown played nice and met with them to avert a strike.

But in another state, the same state where so many Californians are running away ...

In Texas, the bullying SEIU has gone bankrupt!

HOUSTON – SEIU Texas filed for bankruptcy over the weekend following a $7.8 million judgement in a lawsuit brought by a janitorial service company the union sought to destroy.

The SEIU loves to attack non-union companies and entice the employees to get unionzed.

There is only one problem: most companies don't want a unionized workforce, but not because they abuse their employees.

Unions make it harder for businesses to ... do business!

Professional Janitorial Services (PJS) Houston argues that SEIU International, with its $300 million-a-year budget, should be forced to pay. So it filed dozens of choice SEIU emails with a Harris County court last week meant to show that headquarters was running the show.

WOW! That's part of the scam. This creepy union wants to create a labor monopoly and force every agency to play by their rules and pay for them ... or else!

The internal emails show that SEIU has continued to wage warfare against PJS, both for undercutting its unionized competitors with low bids, and because company executives dared to support a Texas bill that would end government-forced collection of union dues.

Notice that it is "warfare" for unions.

They want to destroy businesses. They end up putting people out of work.

This is force. This is coercion. This is wrong.

Right into 2016, the union continued to circulate unfounded allegations of “wage theft” and other calumny, which was the sort of conduct that lost the lawsuit for the union.

This wage theft argument is very common in the Los Angeles-Long Beach area, too.

The emails also demonstrate exactly why PJS officials might have hard feelings toward public sector unions – the SEIU is still pulling strings with public sector pension funds to get them to pressure building managers to sever ties with PJS.

Now they are blackmailing businesses by threatening the retirement of hard-working janitors.

I thought that unions were supposed to be pro-worker.

That conduct was one of the big issues in the lawsuit SEIU Texas lost. The emails show SEIU executives successfully pushing to get New York pension officials to do the same.

The emails also show the national SEIU office in Washington, D.C., coordinating many Texas-related campaigns. In one, which demonstrates the detailed level of involvement, national executive Bill Ragen scolds a recent low-level hire working for SEIU Texas for expensing a taxi ride to the office.

How about that?! So, unions are racketeers extraordinaire!

The emails show why union organizing sometimes gets into areas covered by racketeering law.  In one, Ragen talks about running a short, intense campaign against PJS’s Austin operations to appease a unionized competitor, ABM Janitorial.

Shame on the SEIU! Now they have to pay the piper!

Townhall.com also reported more specifically why SEIU Texas was hit with a lawsuit:

A jury ordered Service Employees International Union Texas, also known as SEIU District Five, to pay Professional Janitorial Service of Houston $7.8 million in September for making false claims about the company during a campaign to rally support from workers and local activists.

A Texas judge rejected the union’s request for a mistrial on November 15 and ordered it to hand over files associated with the case to the company for discovery.

Harris County District Court Judge Erin Elizabeth Lunceford on September 26 ordered that the union pay $2.5 million in addition in interest because the lawsuit lasted almost a decade. The total judgment increased to $7.8 million.

Unions go to court every time they don't get their way. Notice that they harangued the janitor's company for TEN YEARS! 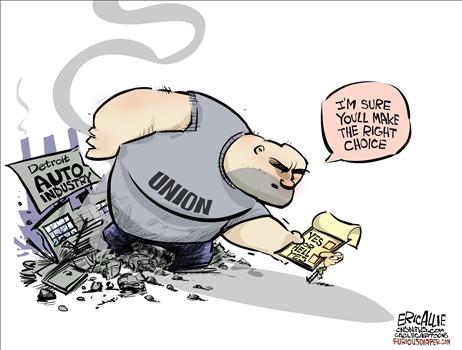 Not just the end of labor abuses, but tort reform is a must!

The union claims it doesn’t have the money to pay the judgment even though it collected over $4.6 million in revenue from dues in 2015.

On December 3, 2016, SEIU Texas filed for bankruptcy at the U.S. Bankruptcy Court in Corpus Christi, Texas. The President of SEIU Texas, Elsa Caballero, released a statement on December 5 regarding the bankruptcy action:

“This filing ensures that our union will remain open for business, representing members at the bargaining table and maintaining the vital role the union plays in helping working Houstonians have a voice at work, protecting them from unfair employers, and building a better future for their families.”

Open for business? The union is more interested in putting people out of business and out of work!

The appeals court will hopefully affirm the lower court’s decision and limit the exclusion that unions enjoy from harassment laws and other violent behavior. For example, the 1973 Supreme Court case U.S. v. Enmons held that the anti-racketeering Hobbs Act does not cover union violence to achieve union objectives.

Unions have been pushing people around forever. Nice to see them getting pushed back.

I could not agree more!

This is the fate that we need to see happen to public sector unions in California.

The lauch abusive charges and arrogant lawsuits against businesses. They rely on force and fraud to get their way, and most businesses just throw up their hands and give in because they are struggling so much as it is.

Hopefully, SEIU's bankruptcy in Texas will be the first of many financial and organizational losses suffered by this arrogant, defeated thugocracy!