Through voter fraud, forced unionism, and outright lies, the California Democratic Party has taken back supermajority power in the state legislature.

The first act of the Democratic majority?

They have declared their stern refusal to comply with federal, particularly on immigration.

Pro-amnesty advocates and illegal aliens are demanding that the attorney general not turn over the data base of Mexican and other Hispanic-oriented gangs to the feds.

Two bills have already been introduced into the state legislature.

These two bills focus on granting proper funding for legal counsel to illegal aliens once they are dragged into immigration court.

The state legislators, who took an oath to uphold and defend the Constitution, are now openly defying federal law and the federal government.

They are giving jobs, housing, money, privileges to illegal aliens.

Let's not forget the easy money from food stamps and other welfare subsidies going to the poorest of the poor (if they can be called poor.) Veterans are dying in the streets of California. Moms and Dads who obey the rule of law and work for themselves and their families are heavily taxed.

But the public sector unions, the illegals, and the welfare queens live the life of Riley.

This is a modern-day, California Crazy apartheid!


“Californians should be wary of the national calls for unity and healing,” Rendon (D-Paramount) said, according to the text of his remarks as prepared for delivery. “Unity must be separated from complicity. And we must be defiant whenever justice, fairness, and righteousness require.

“Californians do not need healing. We need to fight."

Fight for what? The right to endanger and discriminate against American citizens, or to despise and reject the will of the voters through the Electoral College?

The La Raza infestation of California politics must be confronted and purged.

Men and women of all backgrounds, citizens of every stripe, and being told to sit in the back of the bus, and watch as our borders are overrun by lawlessness, with illegal aliens playing the asylum card, only to still, kill, and destroy.

Shame on these people.

Rendon called the Trump administration a “major existential threat” on a par with the Second World War. He also repeated false charges against Stephen K. Bannon, the Executive Chair of Breitbart News (on leave) who was appointed CEO of the Trump campaign in August and has been named incoming White House Chief Strategist and Senior Counselor.

Steve Bannon has been one of the most vocal supporters of the state of Israel. If any anti-Semitism needs to be confronted, look no further than MeCHA and La Raza.

I wonder if Speaker Rendon is an anti-Semite, too?

“White nationalists and anti-Semites have no business working in the White House,” Rendon said of Bannon.

Tim Donnelly spelled it out so well what the racist, apartheid Democrats are doing in Sacramento:

California’s Marxist-progressive leadership has vowed to defy federal law and protect the millions of illegal aliens and welfare recipients to whom they owe their political power.
How President-elect Donald Trump reacts will signal to the world what kind of leadership we should expect. 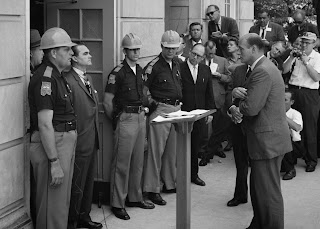 At some people, we have to stop calling these DemoRATS "progressive." There is nothing about progress connected to the California Democratic Party, which has  enacted its own form of apartheid and slavery--this time against minority citizens who want to get out of poverty, as well as all citizens and law-abiding legal residents trying to get by.

The warning last week from California Democrats, “Come at us,” was a first salvo — a warning shot — testing the waters.

California is launching a direct attack on the Union, something that hasn’t happened since the civil rights movement, and even the Civil War.  And when I say California, I mean the Democrat supermajority that controls the legislature, and every statewide office; and the leftist media, who make up two-thirds of the unholy trifecta that rules California.

Yes indeed. The California Democratic Party is feeling its racist roots all over again. If Speaker Anthony Rendon had his way. he would have implemented an anti-white, anti-black, anti-Asian apartheid system against us. He does not care for the rights of all Americans.

He wants to do what is "best" (or at least politically expedient) for the limited, anti-American political elite.

No apartheid! I am fed up with this arrogant state political class ignoring the needs of ordinary Americans!