The Democratic Party of Segregation: Hawaii

Hawaii has been a Democratic plantation for the last fifty years. Government subsidy, labor abuses, and bureaucratic networking define the political landscape of this state. Homelessness and loafery are the norm, too. It's all to easy to sleep on the beach and not work at all, as the government will continue to pay for it.

And the rich and famous who move to the island don't quibble with the heavy taxes and regulations. Most of them do not have to pay.

Hawaii is one of our four states which has completed Democratic dominance.

The Democratic Party is well-known as the party of stealing, slavery, and segregation.

Lo and behold what one restaurant posted after Republican Donald Trump's victory:

The note then adds "No Nazi."

And yet, it was the Nazis which proposed and promoted policies of segregating and blocking people from public accomodations ebcause of their beliefs

The virulence of the Democratic regions is particularly sickening.

Do they not recognize the disturbing irony of their actions?

Once again, if we understand the complete history of the Democratic Party, tactics like this are not unusual.

This has been a developing story over the last two days. What were the restaurant owners thinking?


The cafe was reportedly founded by Robert Warner, a former hair stylist and Seattle restaurateur, along with his wife Jali. Jali said the restaurant doesn’t actually refuse service to Mr. Trump’s supporters, and she insisted they don’t “put anything different” in the food ordered by his supporters.

“Robert just wants to express how much he doesn’t like Trump,” she told Fox. “If people take it personally or it hurts them, we cannot help. That’s why we say they have [a] choice if they want to come or not come. We don’t force them.”

Jali said three people called to complain about the sign when it first went up last month and “that’s it.”

“We don’t want to create trouble,” she said. “There is enough trouble in the world.”

The sign is pretty clear, however, that the proprietors do not want to serve Trump supporters. Friends of mine have faced similar discrimination in certain restaurants in California, too.

What has happened to some of these people? Whatever happened to honoring the natural rights of all mankind?

A new report indicates that the owners have taken down the discriminatory sign, but their efforts have not placated the outrage around the country:

The Honolulu cafe has taken down its owner's handwritten note on the door that told those who voted for Donald Trump that they would not be allowed to eat there, but the online backlash to the note continues to grow.

“If you voted for Trump, you cannot eat here! No Nazis,” read the sign at Honolulu’s Cafe 8½. It was posted earlier this week and a photo of it was shared widely on social media.

The sign has since been taken down, per the Honolulu Star-Advertiser, but many people are still upset about it. The restaurant’s Yelp and Facebook pages have been flooded with critical comments and calls to boycott the venue.

Technically, many of those comments likely will not be permitted on the consumer rating website, since only actual patrons who ordered food can comment.

In fact, that's the warning Yelp! has posted: 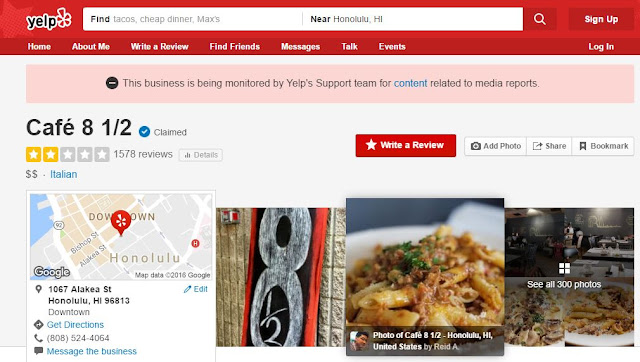 Then this disclaimer appears: 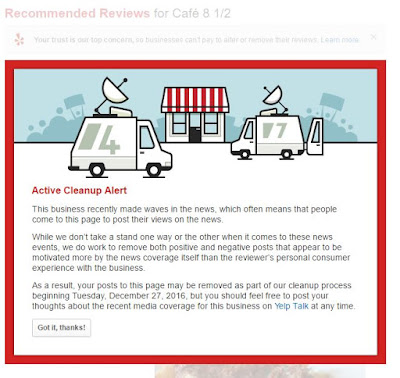 But if anyone can look more closely, some of the heated negative comments stand out (however faintly): 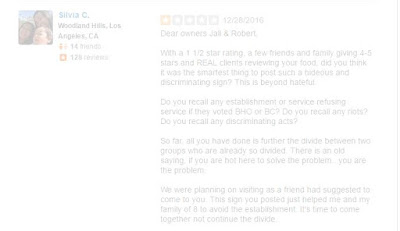 No doubt this person did not actually dine at the Cafe.

But the  damage has been done. No longer will intolerant liberals get away with their political discrimination tactics without paying a price.

Of course, restaurants are private firms, and the owners have the right to express their views and refuse service to anyone. 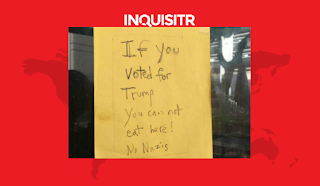 The real problem is the untenable double-standard. If the sign had said "No Hillary Supporters," the corporate media heads would have bee reporting about this for a week straight. If a bakery does not want to cater for a gay wedding, the owners face fines or prison time.

Everyone should have full an free use of their property, including the right to discriminate, and they please, and no one should pick sides.

Of course, the consumer has consummate power in instances like this, and thus pro-Trump voters and supporters can simply boycott such an flagrant yet permissible abuse.

What do you think?

Contact the restaurant, and let them know your thoughts about anti-Trump discrimination: