The Los Angeles Times has lost all inference of objectivity and integrity.

They are a full-on Democratic Party Pravda in one of the bluest states in the union, a state which has taken on every progressive agenda policy, to its hurt and the damage short and long-term against every citizen in the state.

They have just reported that the 55 electors are going to the state capital to cast their votes for presumably Hillary Clinton.

I wonder if any of them can be persuaded to change their ballot and vote for Bernie Sanders or for ... Donald Trump?

I just read an article in Politico in which a progressive Democrat, a hard-core Bernie Sanders supporter outraged with her party and the cheating lying Crooked Hillary Clinton campaign, casther ballot for Donald Trump!

Let's see what happens on Electoral College Day this Monday.

At any rate, the Los Angeles Times continues to play left-wing cheerleader and bemoan Clinton's loss.

Check out the final Electoral College map to see how deep the butt-hurt sour grapes goes: 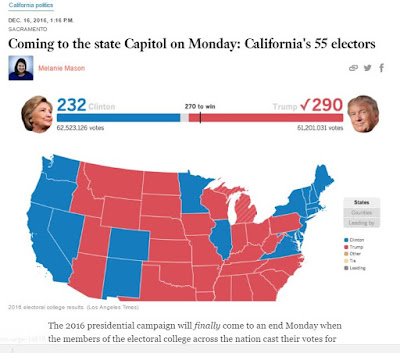 Now notice the state of Michigan: 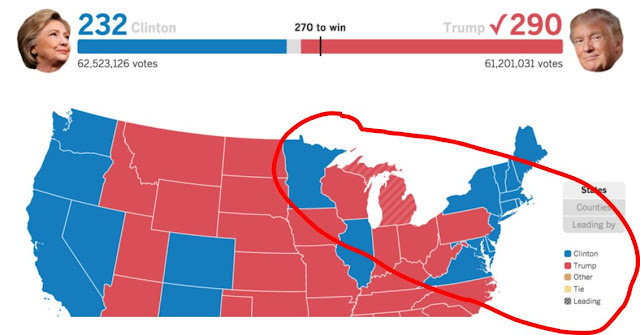 The editors will not permit a ruby red hue to color the Wolverine State!

Talk about denial taken to extremes!

The courts just blocked the recount.

The margins of victory expanded for Trump in Wisconsin, and Pennsylvania is a done deal.

Deal with it, Los Angeles Times! Deal with it!
Posted by Arthur Christopher Schaper at 11:06 PM