The Left's Obsession with Russia: A Distraction from Their Failures

For the Left, the Russians are coming, and they are still coming.

The truth is, the iterations of illiberal, anti-liberty, anti-nation state politics hit a brick wall: the people themselves.

Voters, taxpayers, citizens expect at a bare minimum to be kept safe.

Political figures were more intent on legislative virtue signalling, but refused to protect the rights and necessities of their betters, i.e. the voters themselves.

They wanted open borders, homosexuality, transgenderism, the destruction of the individual as an identity and a focus of value.

The individuals, the citizenry fought back.

Now look at all the left-wing parties around the world.

In Great Britain, the Labour Party and the Liberal Democrats had their worst showing in decades last year over the past two years. 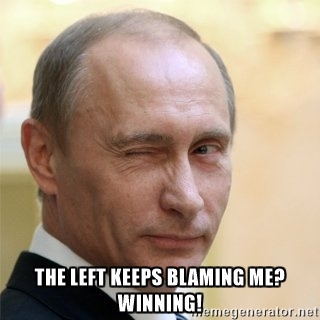 They rely on welfare recipients, illegal aliens and their enables, and the labor unions for their remaining legs of support. This trifecta of Left-wing insanity will not last very long, since pro-liberty reforms are sweeping the country in an accelerated fashion.

Big Labor is the only major player left in the Democratic Party's illiberal phalanx.

30 states will be right-to-work states by the end of 2017, and the Democratic Party's easy wellspring of money will dry up. Expect deeply blue states like Rhode Island and Illinois to start taking on a distinct purple hue in the next two years. Illinois Governor Bruce Rauner might actually win re-election in 2018 (but only if he brings back conservatives consistent with a pro-life agenda, a challenge made worse when he signed off against conscientious objections to health care providers.

When the Big Labor thuggocracy falls, then large cities and the inner cities will be easier targets for Republicans to be effective. Students can choose the school they want to enroll in. City councils will no longer be bought and paid for by labor unions. Balancing budgets and ensuring a secure future for municipalities will be the norm, not the exception.

What do leftists have left?