Former California State Assembly Speaker John Perez suddenly announced that he is dropping his bid for Congress, to replace the out-going Xavier Becerra (who will be California's next attorney general, perish the thought).

I received an email from the California Friends of the African-American Caucus this morning.

Here are a few excerpts from the Breaking News eblast:

JOHN A. PÉREZ WITHDRAWS FROM CAMPAIGN FOR CONGRESS

Speaker Emeritus Pérez released the following statement, announcing his exit from the race:

What gives? This man had so many endorsements, I don't think he was able to release all of them in a timely fashion.

Here is Perez' full statement on his Campaign Facebook Page from this morning:

The last 8 days have been a whirlwind in every sense of the term. I have been left in awe by the outpouring of support I have received from countless community members, grassroots activists, and friends I have spoken with in the past 8 days. In a short while, I have received more support and more good wishes than I could have imagined.

With all the good news, I also got confirmation that I have a health care situation that requires my immediate attention and my ongoing focus for the near term.

What could that be? I mean, Perez has always been on the heavy side. He's 47 years old, so it's not like he's really young--but he's not old, either.

A health problem all of a sudden emerges and derails his bid for Congress.

This is serious, but I do not seriously believe it's a health problem ...

In the last 48 hours, I have spoken to doctors who have helped me determine the best course going forward.

As a result, I am immediately turning my focus to that, which prevents me from giving my campaign and the community the time and attention that are necessary to run a campaign our community can be proud of. As such, I am bringing my campaign to a close, despite the overwhelming support that I have seen.

I'm going to take the next couple of days off as I prepare to focus on my health. I expect to be back at full force before too long. While I won't be a candidate for Congress at this time, you will still see me actively engaged in my business and in advancing the progressive causes we all care deeply about.

Hmm .... Why not go on Covered California and get the care he needs? How bad of a health problem could this really be?

To my friends, family, and supporters who have been with me through this campaign, I am humbled by the enormous showing of support I have received, and I want you to know that I am eternally grateful for it.

Perez had announced his bid for Xavier Becerra's just a little over one week ago!

The press released indicated his stark confidence as the favorite to win:

LOS ANGELES, CA – Today, former California Speaker of the State Assembly John A. Pérez announced that he is running for the 34th Congressional District, which is being vacated by U.S. Congressman Xavier Becerra.

I received two eblasts detailing the long list of endorsements, including US Senator-Elect Kamala Harris ... yesterday!

With so much wind at his back, why would Perez suddenly drop out? Health issues have not stopped candidates with supreme ambition from running before?

Don't forget that Democratic Party leaders throughout the state endorsed Perez. This circus of support does not magically appear. It's almost as though Perez and Company new about Becerra's upcoming appointment as California's Attorney General in advance. 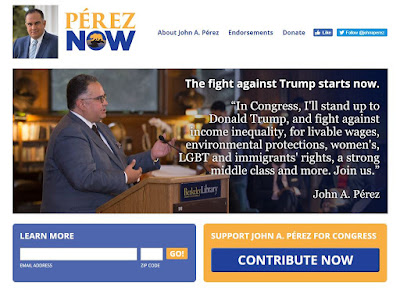 It's spruced up and very professional.

He had this picture ready as soon as December 5th! 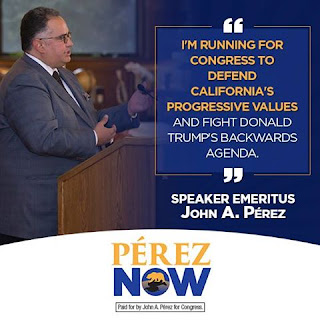 This was a serious campaign with all the stops ready to go.

If he was struggling with health issues, why would be throwing together a comprehensive campaign like this?

"I've got to focus on my health right now," Pérez said in an interview. "But it was a very hard decision."

Hard decision? Certainly, especially with all the work that jumped out into the public eye within days of his announcement.

The Governor hasn't even issued a proclamation for the special election!

The 47-year-old Democrat declined to offer specifics about his condition, citing a desire to keep it private. But he said it was serious enough that it would keep him from waging a vigorous political campaign in 2017.

"The treatment is one that doesn’t lend itself to the intensity of a campaign that the community deserves," he said.

That sounds like cancer, if that is the reason why.

Pérez, who serves as a University of California regent, was the most high-profile politician who had entered the race. He was also the first to announce his candidacy after Becerra was chosen by Gov. Jerry Brown on Dec. 1 to be California's next attorney general.

The timing of a special election to fill Becerra's seat remains unclear, though it would probably take place next spring. The race is likely to attract a number of Los Angeles Democrats, with Assemblyman Jimmy Gomez (D-Echo Park) and activist Wendy Carrillo among those in the mix.

Update -- Jimmy Gomez has announced his bid to run.

Pérez said it was too soon for him to decide whether to endorse any other candidate in the race to replace Becerra.

Dec. 10, 2:18 p.m.: An earlier version of this post failed to mention activist Wendy Carrillo as a declared candidate to succeed Rep. Xavier Becerra.Bottom of Form

Did any other sites offer more information on this sudden cancellation?

Perhaps some of these stories scared off Perez?

Or what about this?

California’s Bully Speaker John Perez and His Disrespect forthe Law, the Press and the Public

Perez likes to shake down his opponents, especially when they are fellow legislators who vote in the  best interests of their constituents instead of the special interest.

Other sources have informed me that a lot of people do not like Perez. THey think that he is a jerk.

But so what? He has a long list of endorsements, and they are not getting behind him because all of them are buddy-buddy.

He has a corrupt past.

He is not as well liked as people think.

And yet ... all of this does not add up to why a high-ranking Democrat decided to bail on a race that had all the prime trimmings of a real bid certain to win.