Donald Trump is pro-Israel with a capital P-I.

So were Bobby Jindal, Scott Walker and the other GOP contenders. And yet, the President-Elect has exceeded my expectations—and he hasn’t even been sworn in yet!

When the United Nations Security Council flirted with the first anti-Israel resolution, the Donald blasted the move, and they backed off. Then came the second anti-Israel resolution (the latest out of more than 200 over the past six decades). Instead of hurting Israel or damaging American-Israeli relations, this move strengthened the Israeli government under Benjamin Netanyahu.

He blew them off, and lit the Chanukah candles right next to the big beautiful Western Wall.
The UN’s resolution exposed what a selfish, unbearable (anti-Semitic?) creep Barack Obama and his left-wing administration have been.

I welcome the Trump administration as an unequivocal iconoclast to the status uo thinking on the Middle Eastern conflict. He is not beholden to neocon interests or the dithering K Street J Street lobbies parading in Washington DC. He is actually going to move the American embassy from Tel Aviv to Jerusalem. This move will ruffle feathers, but so what? Jerusalem is the capital of Israel, and no, you UN unintelligent morons, it’s not “occupied territory.”  David Friedman, Trump’s nominee as US Ambassador to Israel, is an orthodox Jews (kippah and all), and he does not hide his disregard for the current two-state solution proposed by Israeli Prime Minister Netanyahu.

Following the latest flare-up between Obama and Israel, The United Nations and the Two-State solution will get the rough treatment they deserve.  Up to now, I have found that even the most ardent of Republicans are not setting the right tone on these international crises. At the 2004 RNC Convention President George W. Bush affirmed his resistance to any negotiations with the Palestinians until they recognized Israel’s right to exist—and would agree to a two-state solution. Not good enough. There will never be a two-state solution, since the other “Palestinian” state has been established on false premises and failed promise, from 1949 to the present day.

Then there’s US Senator Ted Cruz. No one can discount that Cruz is a true friend of  the Jewish State. in 2013, Cruz demanded Secretary of State John Kerry’s resignation when Kerry called Israel an “apartheid state”. When an audience of Middle Eastern Christians booed him for his support of Israel, Cruz waved, said “God bless you,” then left the stage. Following the UN Security Council’s officious resolution condemning the Israeli settlements in the West Bank, Ted Cruz demanded that the United States cut all funding … until the UN rescinds the resolution.

This latest betrayal of Israel should come as no surprise, anyway.

Israel is the cup of trembling foretold in the prophet Zechariah. World leaders cannot articulate a coherent foreign policy without an opinion about Israel. Will they defend the Jewish State? Will they demand a two-state solution? Who is at fault in this conflict? Well, since our Commander in Chief has eschewed the political correctness, I will join him.

Let’s cut the kosher niceties. Israel has every right to exist, and this West Bank fraud must be debunked. The arrogant, destructive Islamic terrorists in the region have no interest in a two-state solution, and never will.

The “Palestinians” (as if they should be recognized as a distinct nation) have rejected ample opportunities for resources, support, and independence. The 1948 partition imagined an Arab State and a Jewish state, but Jordan’s ruling class refused the Arab refugees. They remain disjointed, without a country, if you will. Why? Just as bully Rahm Emanuel suggested about Obamacare, the Arab world created a crisis and won’t let go to waste. Stir up the plight of the poor Palestinians and make Israel the bad guy. How many more decades is the world going to witness this violent dumb-show?

The Israelis have never been a barrier to piece. After the Six Day War, they returned the Sinai Peninsula to Egypt. The Israelis released the Gaza strip forty years later. In return the Jews got more rockets into their land and brutal terrorist attacks. From 1948 to the present, the Israelis offer peace. They get gunshots, stones thrown at them, or suicide bombers.

The Arab-Israeli fight is about more than land. This conflict reflects more than sibling rivalries (Abraham blessed Isaac, not Ishmael, but Christ redeemed all, so let’s put that argument aside). This is very much a religious war. The Koran demands a world of submission or of war—and a world where Jews no longer exist.

Not only does The Jewish State upends an Islamic radical’s Koranic fantasy, but Israel is the thorn in the side for the regressive Left. The secular hatemongers (including President Barack Hussein Obama) do not regard good or evil. They are Motivated by a distorted sense of radical equality, where everyone can live in harmony, as long as “the elites” are in charge. The Middle Eastern conflict is the essential battle between good and evil, of righteousness and wrong-doing, between honoring a free society or accommodating a tyrannical one.  Who would want to live in a Palestinian state, anyway? Arabs from around the world call Israel home. They have no interest in moving into a chaotic Palestinian kleptocracy. 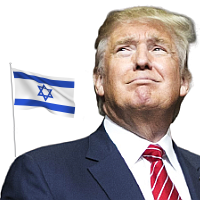 The UN, along with the Two-State Solution, emerged as a first step toward global equality long sought by liberals. It’s time to call out these unrealistic, destructive fantasies.  It’s time to tell the truth.

President Trump: Defund the UN, and denounce this Two-State solution nonsense for good!