OC Weakly's OCD Hatred Toward Dana Rohrabacher (and Other Issues)

There are three alternative, left-wing periodicals that I know about in Southern California.

2. LA Weekly (which has some great reporting on education)

3. OC Weekly (which has written hit pieces against conservatives and local officials, including a flurry of attacks against OC District Attorney Tony Tony Rackauckas).

This is a slowly declining liberal rag, but it's worth noting the desperation which the "alt-left" has descended into.

I noticed one of their videos, which focused on former OC Board Supervisor Chris Norby. The camera closes in on something that he is writing -- but what is it that they are trying to report? And isn't a recording like this an invasion of privacy? I get that Norby was a public official at the time but seriously?

(Oh, and I had no problem with former OC Sheriff Mike Carona getting thrown out of office. Corruption is corruption, and people need to be held accountable.)

But there is something about OC Weekly that is very strange.

I mean, aren't they connected to LA Weekly?

Well, I started to get answers shortly after I commented on one of OC Weekly's articles about former Congressman Bob Dornan, aka B-One Bob!

Here's the link that the reporter R. Scott Moxley wrote:

Remember, this is the left-leaning OC Weekly, so Bob Dornan is an automatic target.

Here were my thoughts in response to the above article, hit piece, etc.:

The writer forgets that he [Bob Dornan] represented part of Torrance and the Palos Verdes peninsula in the late 1970's to the early 1980's.
How could he have forgotten that?

I tweeted the article to Moxley, then he tweeted back to me, then followed me on Twitter.

Within seconds, he started asking about me, and then starting going off on Congressman Dana Rohrabacher (R-Newport Beach).

Look, I get that a liberal magazine wants to attack Dana. He is an effective conservative voice who has survived just about everything that has taken over California. He has stayed strong on immigration (enforcement, not amnesty). He supports decrminalizing Marijuana.

He is not afraid to say stuff that gets people upset.

He's a pretty cool guy--and sure, I have issues with his pro-Russia stance.

First, here's the whole video of the Direct Message Twitter feed with Moxley:


Here are Moxley's preliminary remarks after I sent him my article about their article on B-One Bob: 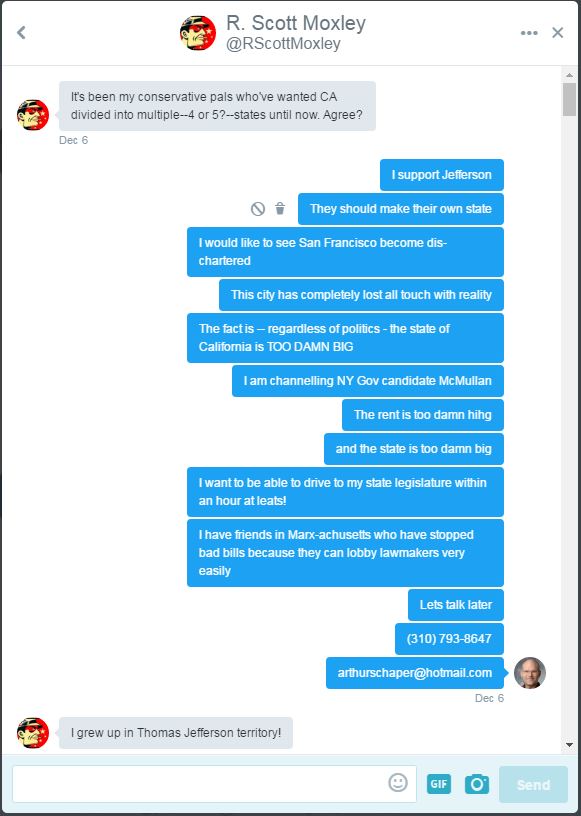 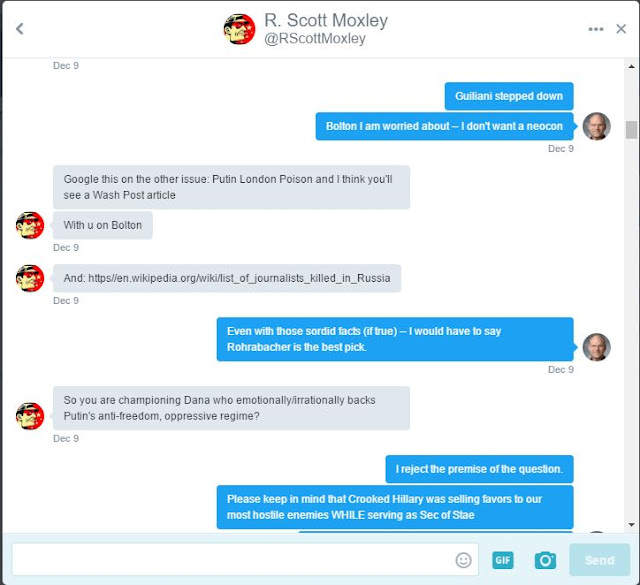 He already character-assassinates the Congressman and labels him a fascist who supports every action done by Putin. 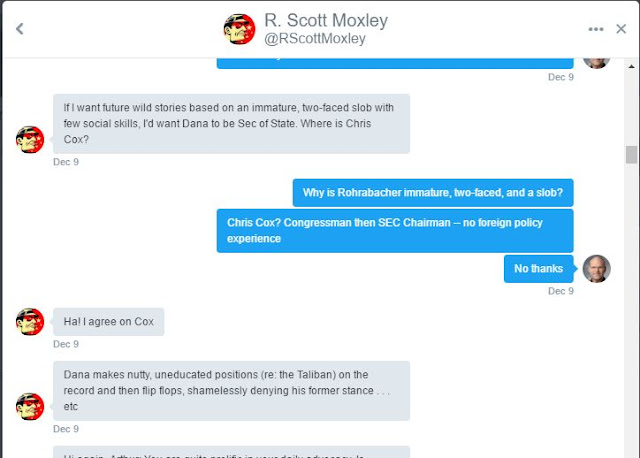 "If I want future wild stories based on an immature, two-faced slob with few social skills, I'd want Dana to be Sec of State ..."

These comments are immature, two-faced, sloppy.

There is nothing wrong with criticizing our elected officials. I do not view Vladimir Putin as an ally of the United States or any other freedom-loving country.

Dana Rohrabacher is wrong about this, and I am not afraid to publish my criticism.

But how does an "award-winning" journalist launch into immature, puerile attacks against a Congressman and expect to be taken seriously?

Check out the tweet he issued a few weeks ago:

Check this article out that Moxley wrote:

And who cares if the audience has "Caucasians"? Why are liberals so obsessed with race? Did they not notice that the Democratic Presidential primary for Election 2016 was nothing but old, white New Englanders?

But the Dana-Derangement is sad.

To Moxley's credit, what he wrote about me was based on statements I have said or written. Talk about easy press!

But this statement was bigoted and false:

"In short, gay Americans are, he [Arthur Schaper] maintains, the real bigots in our society."

Here are the statements I gave to him: 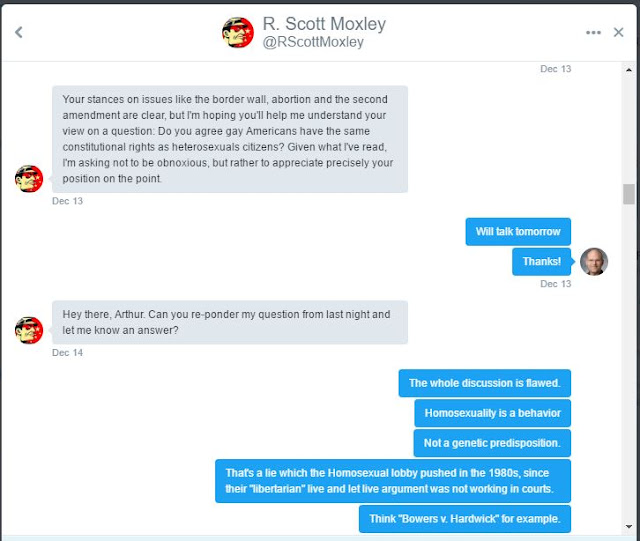 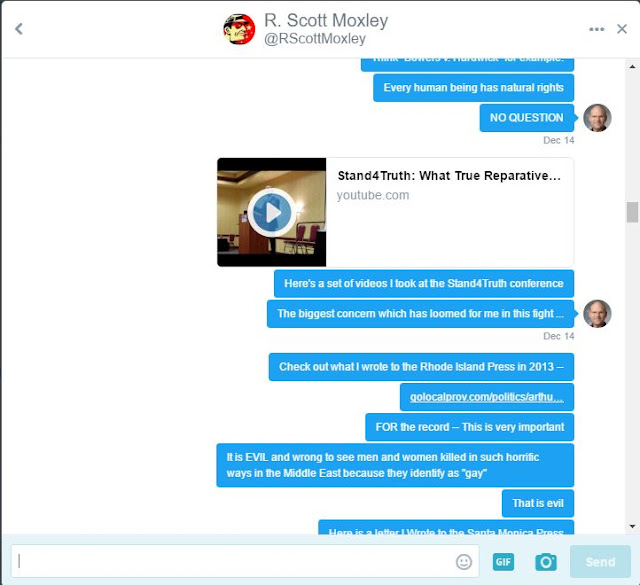 And what followed was pretty disturbing, coming from an "award-winning" journalist: 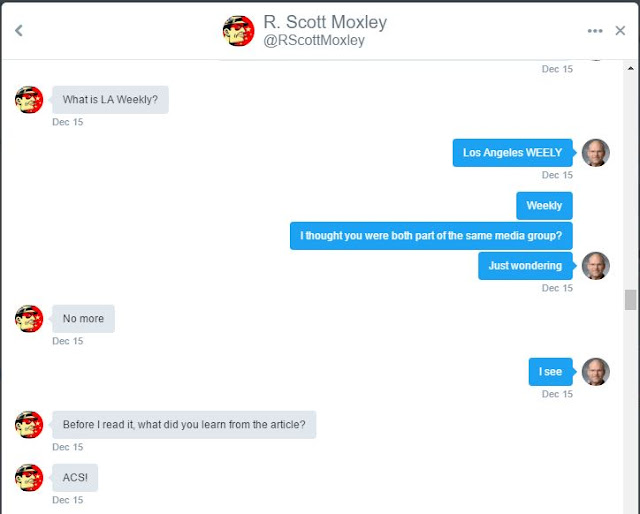 Notice that he did not read what I had sent him -- which were articles from LA Weekly.

And he did not know what LA Weekly was ... but he writes for OC Weekly.

Now that is just sad!

I explained to him fully my views about what homosexuality is--not an identity but a behavior -- and his summary?

By the way, here's part of the interview I conducted with Pastor Bill Owens at the Stand4Truth Conference.

This man lived in the Civil Rights Movement.  He understand the vital dangers which faced African-Americans who fought for their natural rights outlined in the United States Constitution, yet routinely spurned and rejected by the Southern State (DEMOCRATIC) Governments.

For more clips from my interview with Pastor Bill Owens, please feel free to visit my YouTube Channel here.

So, with all the information I gave Moxley, this was his conclusion:

"In short, gay Americans are, he maintains, the real bigots in our society."

Not sure where he got that one from ...

Where did he get this idea from? Perhaps it's his own, because I never said that.

These awards programs are just like the (increasingly irrelevant) Academy Awards.

Out-of-touch elites elect a smaller cadre of their peers, who in turn review and and then give awards to their peers for recycling the same liberal views.

There is a scadzillion awards given out during the evening by the press club — you can peruse the full list. Here are some highlights that jump out to me.

With so many awards, they don't seem to be worth that much--kind of like handing out participation trophies rather than recognizing real accomplishment and talent.

And how can this group really be labeled "professional"? They award Moxley, who distorts the records and views of his subjects, fails to inform the people he interviews that he is working on a story about them, and engages in child-like name-calling as a means of making a point about elected officials?

The standards for these awards programs must be pretty low and liberal.

Notice that a grand total of three comments appeared on the OC Weekly blog about me:

Here's an article I wrote for Canada Free Press:

Then InfoWars republished my article, which comes as no surprise. I wrote about Alex Jones' epic take-down of the liberal and corrupt media progandist Cenk Uygur and his show "The Young Turks":

It seems that OC Weekly is getting a "Weakly" review from OC Residents.

Does anyone even read it anymore?

I am aware that the paper has been sold a few times, too to different buyers trying to make something off of it.

Liberal rags and bully mags are taking a major dive.

But what can one expect from "journalism" that calls Dana Rohrabacher a "slob" and a "mule"?