On Breitbart and other conservative media, I have read a number of attacks alleging that Department of Education Designate Betsy DeVos is pro-Common Core.

From Dr. Susan Berry at Breibart:

Anti-Common Core grassroots groups of parents and teachers urged Trump to abandon DeVos as his choice, citing her support for the education reform policies of pro-Common Core Jeb Bush and her influence through the Great Lakes Education Project (GLEP) in favor of Common Core.

Bush described DeVos, who is a major contributor to the Republican Party, as an “outstanding pick” for the cabinet position.

She is a key player in Michigan and Republican politics, no uestion bout it.

SHe is part of the reason why Michigan has a GOP trifecta and has turned a nice shed of red this past election.

I do not like Jeb Bush. I am glad that he lost, and in an epic fashion.

His words of praise or criticism are not important or essential for determining the worth or rejection of any candidate.

But does DeVos support Common Core?


Here are Betsy DeVos' own words:


Q: What are 5 things we might not know about you?

I’m a grandmother! My husband (Dick) and I have four children and five grandchildren.
I was born and raised in Michigan. Born in Holland, MI, I’ve been a lifelong resident of Michigan.

I’m an advocate for children. I’ve been involved with education issues for 28 years. I’ve been on the front lines fighting to make education better for all children.

I’m an activist. I’m a total outsider to elective office and government, but I’m no stranger to the political process. A citizen volunteer, I have served in local, state, and national offices.
I’m an entrepreneur. I have started new and innovative companies that help make our community better.

Q: There’s been a lot of talk about Common Core. Can you provide some straight talk on this topic?

Certainly. I am not a supporter—period.

I do support high standards, strong accountability, and local control. When Governors such as John Engler, Mike Huckabee, and Mike Pence were driving the conversation on voluntary high standards driven by local voices, it all made sense.

Have organizations that I have been a part of supported Common Core? Of course. But that’s not my position. Sometimes it’s not just students who need to do their homework.

However, along the way, it got turned into a federalized boondoggle.

Yes, it did. A number of Presidential candidates were pro-Common Core, then backed away from it. Whether out of political expediency or principled revelation, they oppose it.

Jeb Bush doubled down on his support for the misguided, overbearing, illiberal reforms. He lost big time, despite the $100 million push behind him to get elected.

Above all, I believe every child, no matter their zip code or their parents’ jobs, deserves access to a quality education.

Q: What are your thoughts about specific education policies?

I am very excited to get to work and to talk about my thoughts and ideas on making American education great again. The status quo is not acceptable. I am committed to transforming our education system into the best in the world. However, out of respect for the United States Senate, it is most appropriate for me to defer expounding on specifics until they begin their confirmation process.

Should we take DeVos' words for it?

Should we be alarmed about her connections with Governor Rick Snyder? None of this should come as a surprise, since she was the Chairwoman of the Michigan Republican Party. I would submit that the MI GOP should be glad for her service, since Michigan became a red state over the past four years, expanding their majorities in the Lansing state legislature and producing 16 electoral votes for Donald Trump.

Let's consider the write-up from the uber-liberal Washington Post:


As a billionaire Republican power broker with no professional experience in schools, DeVos is an unconventional choice to lead the federal education bureaucracy. And while her views on choice are well known, it is unclear how she would lead a department with responsibilities that sprawl from administering student loans to enforcing civil rights in schools.

As expected, liberal WaPo Hate goes after her wealth.

She is pro-school choice and pro-voucher. What's not to like?

She has said little about Common Core, for example, and her ties to organizations that support the K-12 academic standards — including as a board member of the Foundation for Excellence in Education, started by former Florida governor Jeb Bush — raised concern for Trump supporters, who saw her nomination as a sign that the president-elect is wavering on his vehement opposition to the standards.

Has she said little on Common Core, though?

Indeed, I have found very little to support her direct support for the program.

She gets praise from pro-Common Core supporters. I wonder: is DeVos pro-amnesty too? She is pro-life and pro-family, but the press has not drawn the line connecting other Besty fans to those issues ...

Does she hide her support behind backing candidates all over the country who are pro-Common Core. Joy Pullman writing for the Conservative Review seems to think so:


Well, there you have it folks. Trump has just picked his education secretary after narrowing down his choices to two pro-Common Core, pro-micromanaging women: Michelle Rhee and Betsy DeVos. I've already discussed what a terrible pick Rhee would have been, but DeVos is no better. DeVos fails on two key promises Trump repeatedly made to voters: "Get rid of Common Core" and "keep education local."

I am disinclined to believe that Trump is reneging on promises.

I had opposed Trump because I did not trust him to deliver on conservative reforms.

Yet his appointment designates for Cabinet are stellar, and demonstrate a commitment to a robust conservative agenda.

Henry Makow even suggested that DeVos will lead the demise of "Communist Core":


It appears that Betsy DeVos will spell the death of the Communist Core curriculum but the far-right billionaire might also open the door for the privatization of the American education system. Anything is better than the system of Communist indoctrination now in place.

I am all for privatization or localization of education.

My view: I take DeVos at her word and Trump's leadership for true.

DeVos is not going to champion Common Core.

If we looked only at Trump's prior rhetoric, We the People who have rejected him outright. He was pro-choice, but now is pro-life. DeVos is also staunchly pro-life, but no one is pointing that out. Why?

School choice will not become a negative under her tenure, but an expanded positive. Regardless of whatever the feds try to pull, expansion of choice will force schools to provide the best education for students, or go out of business.

Common Core will whither away, regardless.

I further believe that education in America will have changed so dramatically, that many of these discussions will become moot.

I welcome the DeVos appointment, I believe that more people should focus on her efforts to enact right-to-work in UAW's own backyard. Labor reforms will do even more to ensure a quality education for all kinds in the United States.


Please contact the following US Senators. Your outreach makes all the difference!

Your call will only take 30 seconds to 1 minute per US Senator, and your child’s future depends on it!

The Two Republican US Senators Currently in Opposition

“Hello, my name is __________, and I am calling this office to inform Senator ______ that she must reverse her decision and support Betsy DeVos as our next Secretary of Education. The future of our children’s education depends on it. Thank you.”

Senators Up for Re-Election in 2018 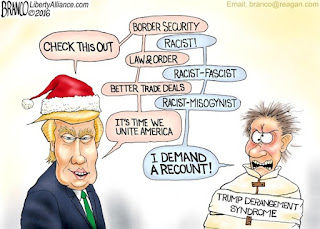 For Other US Senators On the Fence

Hello, My name is _________, and I am calling Senator ______ to urge him/her to support Betsy DeVos for Secretary of Education. She is a qualified nominee with the best interests of children at heart. The future of public education and our children’s future is at stake. Thank you.”
This is urgent. We can’t allow the regressive left to stop education reform and school choice for our students!

Let me know if you have any questions. Email me at arthurschaper@hotmail.com.