Kamala Harris is going to Washington.

She will sit in the minority in the US Senate, where she will sit and vote "No!", and do little else.

Harris seems to elite and effete to filibuster anything. Like other sentimental snowflakes, I doubt that she will do anything more than fundraise and grandstand for the camera. Leftists around the country will be propping her up to be the next President of the United States.

Unless Trump sweeps the country with this new populist and conservative brand of Republicanism (I sure hope so!), and whittles down Democratic options in the year to come.

So, the Attorney General (corrupt and incompetent, as well as non-law abiding) is going away.

Someone has to take her place, right?

Governor Brown has chosen his replacement: 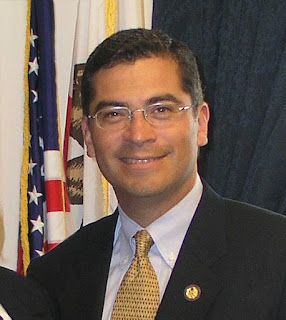 This guy is the male, brown version of Nancy Pelosi.

At least he's a little younger, but he is an aggressive regressive. He has fought with his fellow Democrats in Washington as well as Republicans, who have fought very hard to chip away at Obamacare's destructive regulations.

He also thinks that fish are more important that families and farms. Like a lot of uber-leftists in California, he is totally in lock-step with the destructive agenda against our Constitution and American values.

He loves open borders, and he will fight to protect the rights of illegal aliens and native born criminals over law-abiding citizens any day of the week.

And now he's our next Attorney General.

Interim. How long will this last? He could run for a full term in 2018, and he would have lots of money and support to do whatever he wants.

He has announced full intentions to resist Donald Trump, the Republicans in Washington, and the American People to protect illegal aliens and allow open borders.

Assuming he wins confirmation by the Legislature – a strong possibility, given the 12-term Democrat’s role as a mainstay of Democratic and Los Angeles politics – Becerra would serve as California’s top law enforcement official through 2018, with an opportunity to serve for another eight years if he runs for the office. He would be California’s first Latino attorney general.

Identity politics abounds in the state of California. Too bad the powers that be do not care about the content of their character.

The election of Donald Trump as president has alarmed California Democrats and thrown into question the state’s liberal stances on issues like climate change and immigration. Brown’s choice of a liberal stalwart like Becerra reaffirmed the state’s future role as a pocket of resistance.

“Xavier has been an outstanding public servant – in the State Legislature, the U.S. Congress and as a deputy attorney general,” Brown said in an emailed statement. “I'm confident he will be a champion for all Californians and help our state aggressively combat climate change.”

Becerra  thinks that he is perfect for the job, though

“I have been part of some of the greatest debates confronting our nation, from opposing the Iraq War, to fighting to help Americans recover from the Great Recession, to launching the bipartisan immigration talks and helping write our nation’s health security law,” Becerra said, adding that “California right now is ahead of the country when it comes to clean energy, common sense treatment of immigrants, real health security and so much more.”

These immigrant discussions may be bipartisan in Washington DC, but there is massive opposition to this madness throughout the country. California is spook-central for the rampang betrayal of the voters to the Amnesty Lobby year after year from our elected officials.

A member of the House of Representatives since 1992, Becerra already has some experience in the California attorney general’s office. He worked as a deputy attorney general from 1987 to 1990 before winning a spot in the state Assembly. He has a law degree from Stanford University and said he will have to renew his status as an active California lawyer with the California State Bar.

So, he's an inactive member of the state bar. Now he will be an active participant in California's lawlessness.

What I found particularly intriguing about this appointment, though, is that Congressman Ted Lieu (South Bay/Los Angeles) ran for this office in 2006, even though he didn't make it past the primary. Why not tap him?

A son of Sacramento whose father worked in the city’s railyard, Becerra graduated from McClatchy High School. His father, Manuel, was born in Sacramento and grew up in Tijuana, Mexico. His mother, Maria, grew up in Guadalajara.

In a conference call with reporters, Becerra said he would be “vigorous in defense of what we’ve done” to expand clean energy, protect parts of the federal health care law that Republicans seek to dismantle and preserve efforts toward “criminal justice reform” that seek to protect “young men of color.”


What? Becerra doesn't understand that every person has color in his skin. What about the rest of us?

“We have policies in place that probably won’t pass at the federal level for another five, 10, 15 years,” Becerra said. “If you want to take on a forward-leaning state that is prepared to defend its rights and interests, then come at us.”

Believe me, Xavier, we are coming!

And in the face of Trump’s vow to deport millions of immigrants with criminal records, Becerra appeared to back California’s efforts to prevent removal of unauthorized immigrants who pose no threat to public safety.

The media fail here is beyond outrageous. "Immigrants with criminal records" is so broad a statement as to be meaningless. Legal residents in this country are immigrants, and if they commit a crime, they go to jail. Trump is focusing on criminal illegal aliens. They do not count as immigrants because they did not enter this country legally.

End of story. I fear for the state of California if we have him as Attorney General.

“No one who goes to a grocery store to shop should believe the state of California is going to do anything to keep them from going home to see their kids if they’re just being regular, hardworking individuals,” Becerra said. “You’re talking to the son of immigrants, and I’m going to do everything I can to give that child of immigrant parents every chance I had.”

You have no authority to give criminals a chance. Anyone who enters and resides in this country must do so legally. Period.

Of course, Becerra hates Trump, but has very little on which to base his hatred:

“At every stage in his life, Donald Trump has exploited America’s laws to put himself first,” he said in a speech at the Democratic National Convention in Cleveland.

Like which ones? How many laws have you helped pass, Xavier, to put yourself first?


Of course, Becerra makes it sound as if leaving Washington will be hard for him:

“It’s tough to leave the work I’ve done for 24 years in Congress. We had a lot of work to do. But right now, when California continues to lean forward on so many issues: environment, clean energy, immigration, criminal justice and consumer protection, we’re going to need a chief law enforcement officer to advance those positions and protect them,” he added. “I know how to do the fight.”

Only a Lawlessness Enforcement Officer can look over the above "reforms" and call them successful. These are anti-science, anti-reality measures hurting average Californians. This is feudal snobbery at its worst dictating to everyone else how we are supposed to live our lives.

Stanford University School of Law must be hanging its head in shame to see one of their best and brightest (Class of '84) giving into such destructive lunacy.

Yes, like Governor of California. Sad days are coming our way in California.

Given Becerra’s political experience, name recognition and deep ties to the Democratic establishment, he would be in solid position to run to keep the attorney general job should he choose to run in 2018. In the conference call, Becerra deflected a question about running.

I wanted Xavier to run in 2016 and split the vote. Didn't happen.

But why settled for an arrogant progressive from Los Angeles, when

Besides, Becerra probably did not want to wait at least another six years before entertaining a chance (however strong or weak) of leading a Democratic House caucus back to majority power. Even with the upcoming redistricting that takes place, I anticipate that Republicans will do very well across the country in 2018. If Trump continues his strong string of victories, he could win re-election as President, and pull Republican contests across the country, ensuring Republicans hold the levers of redistricting power for Congressional seats.

Perhaps Democrats will have to wait longer than expected ...

No one should be surprised, then, that Democrats in the most liberal regions of the country (where they retain some semblance of power) are running out of Washington as fast as they got there.

I am glad that Korrupt Kammy is gone--not that it wasn't expected anyway.

But Becerra? Oh brother, just what the state of California needs.

One consolation prize (if any): If his lawless reign as chief Lawlessnesss Enforcement Officer goes as badly as predicted, then California voters may sense a second surge of No-Longer-Silent Majority rage and throw out the horrible leadership in our state.

I can only hope.