It has been one week.

And already the Republican Party of California has seen new blood show leadership and spark.

The state of California is in a big blue funk.

No one can deny that. But across the country, a deep sea of Red has washed out the blue wounds of eight years.

But even here in California, conservatives have not giving up.

We just need to fight a little differently.

Instead of waiting for an election, we are growing from the ground up. After all, when you are down and out, there's only one way to grow -- up!

Democratic partisans and liberal hacks went off on Donald Trump.

This OCC instructor, Olga Perez Stable Cox, claimed that anyone who voted for Trump is "a terrorist."

Check out this video first:


This teacher shamed and slammed the President-Elect.

She is well-known as an unapologetic liberal.

The teacher's union representing this teacher (who is grossly overpaid) threatened legal action against the students who recorded the hateful remarks.

The Orange Coast College Republican Club was not afraid of any action.

Joshua Recalde-Martinez has bravely faced the national media and exposed this and the growing anti-Trump, anti-conservative sentiment on college campus.

This bullying and lack of open discussion on issues has to stop.

The above video is just the tip of the illiberal iceberg.

What happened after this video clip--and in the same class on the same day--was even more disturbing:


The two students above were not connected to the Republican club on campus.

What they witnessed, those, was the true essence of what a bully Dr. Stable-Cox really is.

She actually intimidate the class--particularly the Trump supporters in the room--and invited them to stand up and be identified.

Then she mocked those voters (who did not stand) up: "Why won;t you stand up? It's because you are ashamed, you are too embarrassed."

Honestly, even when I walk around in different cities, there are people who have shouted at me for wearing a Donald Trump hat and shirt. One man told me that I have a lot of courage for doing that.

What is going on in this country? Men and women are no longer permitted to express their political views and affiliations because they are afraid of being shamed or bullied?

This is America, not Cuba, not some third-world country where the government does not recognize the individual rights of its citizens.

Except, perhaps, in California ...

Students from around the area rallied at Orange Coast College earlier this week. They demanded protection for the student and for free speech.

They wanted to administration held accountable for this teacher, whose hateful and bigoted views were impacted the classroom and preventing conservatives from speaking out and having a voice and share in the education experience on campus.

New revelations have now confirmed that a disturbing double-standard exists on the OCC campus when it comes to sanctioned speech:

The Orange Coast College Republicans reported on their Facebook page:


In 2001 a Professor called Muslims terrorist at Orange Coast College and was forced on leave according to FIRE's account without a formal investigation. Now in 2016 a Professor calls Donald Trump supporters voters terrorist and the Professor gets a joint letter of support from the College President, Union President, and Academic Senate. Funny how Orange Coast College only cares about Academic Freedom when what's said doesn't target and bully conservatives.

For further information on the above infraction, click here.

The double-standard is particularly shameful and disturbing.

Where is the justice here? Dr. (Un)Stable-Cox maligned the President-Elect, labeled his supporters "terrorists", then shamed anyone in the room for supporting him.

The media wants to paint the instructor as the total victim in this conflict.

Check out the latest report from the Orange County Register.

The instructor has been getting threats, and she fled the state:

An Orange Coast College teacher who told her students that Donald Trump’s election was an “act of terrorism” has received threats and has temporarily left the state.

News of the threats against Olga Perez Stable Cox came to light Monday, as hundreds of people turned out at the college to demonstrate in support of her and against her.

The professor, the union that represents her and the college have received more than 1,000 emails, calls and Facebook comments – most of them critical of Cox, who a week after the election was recorded on video telling students in her human sexuality class that “we’re really back to being (in) a civil war.”

First of all, such threats are criminal and wrong. The OCC President and his club have condemned these actions.

Did Mrs. Stable-Cox really think that she was going to get away with her rude, abusive, incendiary comments?

She mocked and derided Donald Trump supporters, and put students in an awkward place. If they spoke out, many of them feared that she would lower their grades. It's total bullying.

The teachers bully the students, and then the one teacher receives threats and runs away to her safe space? 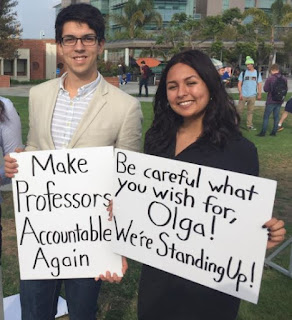 Let this incident be a lesson to all arrogant professors and the students who feel intimidated by them:

1. The arrogant left-wing instructors should feel shame, not the students.
2. They need to be held accountable
3. Students should not fear to expose their arrogant, bullying instructors
4. Colleges are routinely hostile to freedom of speech and expression, especially toward conservatives, Republicans, libertarians, free market advocates

Whatever one may think of the threats and the sudden "danger" against Stable-Cox, she brought this firestorm on herself in part because of her hateful, bigoted remarks.

Then the college and the staff tried to bully and silence the students! 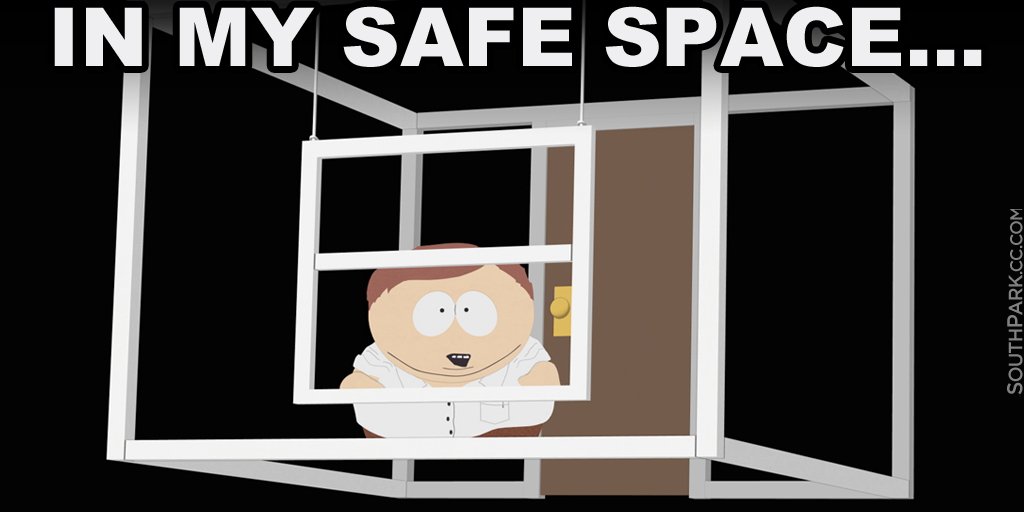