What I Like About Trump ... And Why You Need to Vote for Him

For the past year, starting around the first week of November 2015, I wanted someone else besides Donald Trump as the Republican Presidential nominee. Notice that I did not write "anyone," because some of the 16—or was it 17?—Republican nominees were impalatable to me.


Yes, at one time I joked that I would more likely vote for Lindsey Graham instead of Trump. But that was a fit of rage, and I gladly take that back. I do not want Mr. Chamber of Commerce from South Carolina anywhere near the White House. He (and some of the other Establishment picks like Jeb Bush and George Pataki) wanted to open up the borders, make nice with corporate interests, and put the rest of us out of work or into second-class status. All of that "white guilt" immigration talk was grating, too. I am so tired of the United States being shamed because we will not play welfare state to the rest of the world. The citizens who pay the taxes in this country, including myself, don't want to cover the living expenses of those who do not want to carry their weight. 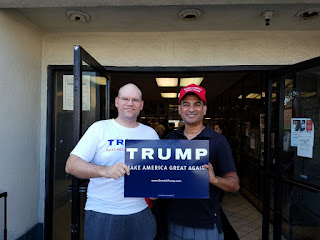 Donald Trump best expressed this rampant frustration and did so without reservation. It’s about time! Donald Trump understands and articulates very well the problems which the Chamber of Compromise have caused us. He recognizes that dangers of globalism which benefits politically-connected corporations at the expense of level-playing field workers and entrepreneurs. Free trade is not free if the workers in China live in abusive working conditions, for example. Nor is it free if Mexican trucks can skirt our environmental laws, but we can’t.


Trump has a blunt charisma about him which attracts people, the much-needed tonic for the destructive political correctness killing our culture and society. Dr. Ben Carson diagnosed the problem, but Trump provided the cure. He is an attack dog, a tiger, a street fighter. We need someone like him who is not going to cover his own tracks and apologize all the time for hurting some people’s feelings.


This country has been looking for someone who will look out for our interests, and not think twice about punching back twice as hard. Trump fits that description. He is willing to take on new fields of battle, too.


He is campaigning aggressively in blue states ... right now!


He is in Minnesota. The last time that state went Republican was 1972.

He went to Michigan. He worked the precincts in Wisconsin.


Pennsylvania has seen a whole lot of Trump. It’s surprising and welcoming.


Let’s not forget New Hampshire. The state motto “Live Free or Die” affably describes the mindset of the outraged majority of voters, including conservatives dejected with the tepid capitulations of our Republican Congress. By the way … Trump is probably going to walk away with at least one electoral vote in Maine, too, where proto-Trump Governor Paul Le Page laid the groundwork. 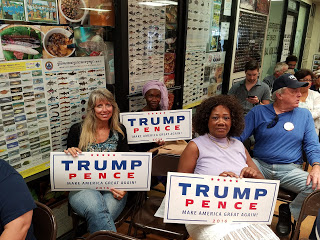 The Republican nominee’s foray into once unfriendly political territory is particularly gratifying. National Republicans have not been working hard enough to expand the map. They were holding onto the reliably red states, and then Barack Obama burst through the solid Red South, winning Florida, North Carolina, and Virginia in 2008. The purple states in the Midwest should be giving the GOP second thoughts, too, including Colorado and Iowa. The Republican Party is planning to lose if they think that coasting on Richard Nixon's Southern Strategy is going to solve all their problems. Maintenance is not the answer. Outreach and connections will make all the difference.


Trump is unafraid to do that. His blunt honest ruffles feathers, but this kind of ruffling is just what the GOP needed—and the voters wanted. The conservative message can—and should—resonate with Rust Belt workers. Why have GOP leaders ignored the concerns of working and middle-class families? Probably because the consultants want their candidates to run out the clock and spend all their campaign money. And the donor class wants cheap labor at the expense of Americans. That is wrong.


Trump is the right man for the GOP, and for a time like ourselves. Evan McMullin (who puts the M in Meh) will have to sit back and watch Utah go to Trump, too.


A last word for the never-ending cynics and critics who don't want to, cannot, and thus will not vote for Donald Trump: your arrogance is your undoing. I don't care if you do not trust Trump. He has assisted families who have lost loved ones to illegal aliens. He has reached out and connected with the Middle America angst gripping families throughout the country. He has listened to the impending concerns of many, including the disaster that is our foreign and domestic policy on too many fronts.

Trump was not my first pick. Scott Walker has a great resume, from elected office to policy victories. Ted Cruz was as smart as a whip. But what good is a partner in restoration who can't talk to you and understand what you are going through? What made Reagan stand out? He was "The Great Communicator." His appeal include the appeal to a dejected swatch of Americans who felt that the good times were gone for good. 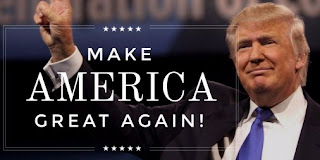 Trump's campaign theme is "Make America Great Again." How much clearer could his intentions be?

Trump is the bull-dozer ready to clear out the wreckage of Obama’s past. He is not frightened by a belittling—and now belittled—media class which all of us hated to begin with. He trashes despicable, corrupt Democrats. He says all the things that we have wanted our Presidential candidates to say, especially to Crooked, Creepy, Crappy and Corrupt Hillary Clinton.


That's a heart-to-heart feel that citizens want in their representative.


So, lingering Never-Trumpers, please put aside your pride. You don't like his past comments or some of his present rhetoric? So what?


There is a lot to like about Trump - and you need to vote for him November 8th.
Posted by Arthur Christopher Schaper at 1:50 PM