My Dinner with Ed Royce at the DPP Celebration

Ed Chen, a legislative assistant and campaigner who helped Ling Ling Chang hold onto State Senate District 29, explained to me more information about the Taiwanese community, and much of the work which Congressman Royce has been doing for the region.

I was really impressed. 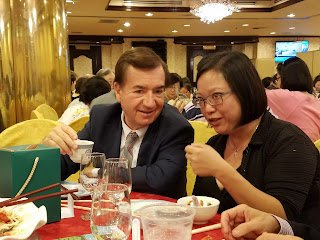 I had no idea how much has been going on in this area.

It was really impressive knowing that there are still Republicans working the precincts and making inroads to different ethnic communities.

I believe that Republicans need to double down on their outreach to Asian communities, since there are so many shared values, especially in terms of their deep distrust of large government.

Throughout the celebration, Councilman Huang translated key comments during the event.

I will write about what I learned later.

For now, I want to share the welcome exchange I had with Congressman Royce before he left for the evening.

I was really excited about Trump's win that past week.

Royce was on board with Trump, but his first choice was Marco Rubio. 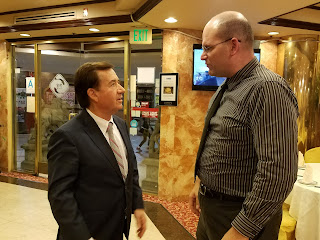 Understandable. Republicans had a wide, deep bench to choose from, and we still do in the next four to eight years to come!

I had to press the Congressman on key issues.

First, he told me that he was not sure what to expect. He had not met with President-elect Trump yet. He had spoken with one ofhis son-in-laws, and they are getting ready to put forward a strong pro-Israel platform.

National security for the Jewish State is vital, and the increase hostility against Christians needs to be taken care of.

He is very interested in helping to get Congressman Dana Rohrabacher's bill out of Committee and out for a floor vote, too!

The second question: what is going to happen with Obamacare?

Royce was succinct and direct: "Repeal It!"

The House GOP Conference is on their way to getting rid of that terrible law which has ruined our healthcare system in the United States. With Obamacare repealed, there will be next to nothing left of the Obama legacy besides his insipid apology tour, the budget-busting national debt,

I am so glad to see Obama go!

"What happened here in California? How do we fix this?

I enjoyed his response:

"By doing what you are doing here. Reaching out to different communities, sharing out message. Just being there!"

I really appreciated his warmth and respect.

He took the time to explain why he had added an amendment to my question.

He was will to talk to me about key issues of concern. Even though he was in a hurry, he took a little extra time to speak with me,

When I asked for documentation about the work he is doing on the Foreign Relations Committee,  I received an email the next day!

So glad for the opportunity to meet with one of the most vocal representatives of the Taiwanese community and who is actively working to strengthen American prestige and  might around the world!