He is a radical liberal in a red Republican area of California.

He wants to take away people's guns.

He supports opening up the borders and granting more entitlements to illegal aliens, instead of representing the needs of citizens.

Check out this video, in which Tressy Capps tries to speak with Agui-LIAR.

Another men from Lake Arrowhead drove all the way down to San Bernardino to speak with the Congressman, too--and Agui-LIAR ignored them both!

He has not core community of volunteers and activists who support him.

At least I got a photo with Petie:

For months, Agui-LIAR and his cronies have been tearing down or ruining Paul Chabot signs throughout the district. Then they replace the signs with the Democratic incumbent

Over 1,000 Chabot for Congress campaign signs have been stolen, and in their place, Aguilar campaign signs are now standing. The coordinated criminal activity is classified as a felony in the State of California.

This is a clear act of desperation by Congressman Aguilar.

Aguilar has refused to speak out against this criminal behavior, and therefore, we believe he has firm knowledge of the criminal conduct.

We call upon Aguilar to turn his campaign over to law enforcement. Police reports have been filed in many cities.  Chabot for Congress pledges to prosecute these criminals.

Aguilar has no grassroots campaign. He depends on paid staff, some of whom worked in his Congressional office, to take a leave of absence to work on his dishonest campaign.

We call upon Aguilar to immediately identify his paid staff and turn them over to the police.

Campaign signs have been slashed, lit on fire, stolen, and more. Suspects have been caught on camera and reported to police in other incidents.

Aguilar barely won his 2014 race, based on yet another dishonest campaign outlined in this book (free download).

Aguilar has a history of cheating to win races.

The last thing that the American people need in Congress is a cheater.

But the Democratic Party cannot seem to do any better than recruit cheaters and liars for elected office. The Top of the DNC Ticket is herself under investigation, and the massive collusion she and her foundation have engaged in has alarmed the most liberal of media organs.

Agui-LIAR is no different, and his thugs have to rely on stealing signs and stifling the pro-life, pro-family, and pro-liberty agenda of the Paul Chabot campaign. 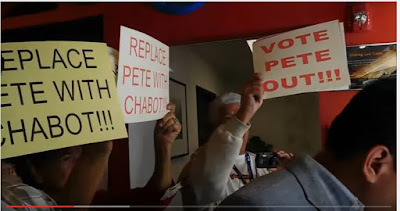