UDPATE: CA Assembly GOP Caucus About to Throw Out Mayes?

The Assembly GOP Caucus has adjourned without a vote.

Honestly, I would be surprised if they did it.

Then again, I would not be surprised, since the GOP caucus did the same thing the last time a couple of RINOs squished and voted to extend taxes on working Californians.

That upheaval overcame the GOP caucus in 2009.

Since then, bloggers and reporters have looked at what kinds of consequences elected officials face when they betray their constituents in Sacramento. 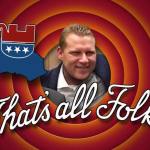 What will happen to Chad Mayes this time, in the not-so merry year of 2017?

Words and rumors are buzzing all over that Vince Fong is the favorite.

But he needs votes.

So ... who are the members still on the fence?

Probably Melissa Melendez, since American Children First has suggested that she was offered up as a replacement as well.

Whoever does take Chad Mayes' place, will they be free of the clutches of special interest, third-house money?

Or will that person be bought off, just like other leaders?

In the meantime, contact the following legislators and tell them to support Vince Fong:

To call their office in Sacramento:


Assembly District 75
Posted by Arthur Christopher Schaper at 10:33 AM