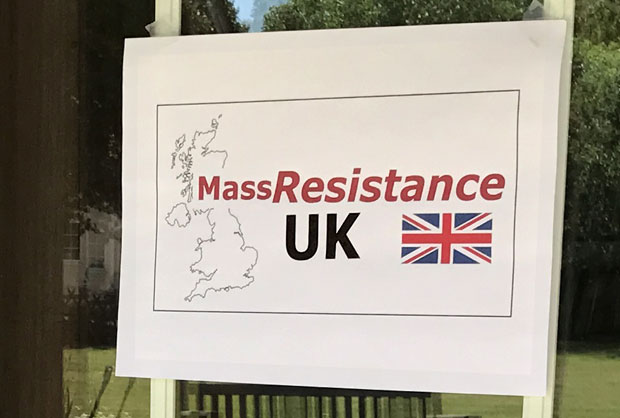 Sign at a meeting in Salisbury, England. A new group is coming together!
The largest MassResistance chapter outside of the US officially got started this month in the United Kingdom. Brian Camenker, president of MassResistance, traveled to the UK June 29 - July 10 at the invitation of MassResistance activists there for the launch of the group. He met with national pro-family leaders and activists from across the country. A big kickoff meeting in London highlighted the week.
The momentum is beginning. MassResistance already had over 300 people in the UK prior to the launch, and has now picked up many more volunteers and activists.

The anti-family oppression in the UK

How bad is the situation in the UK?
From a pro-family and religious perspective, the conditions in the UK are among the worst in the world. Most of us have seen the news about Charlie Gard, the baby whom the British courts ruled must die rather than get “unapproved” treatment his parents want.
But the anti-family oppression is pervasive across the spectrum. The horror stories we’ve seen and heard are unbelievable. The ever-more-radical LGBT agenda is brutally enforced in schools, businesses, and other institutions throughout the country, and anyone who disagrees (including parents of young children) are treated harshly. Christian parents and home-schoolers even risk having their children taken away by the state. Politicians, the courts, and even the police are demonstrably hostile to pro-family people, and often act arbitrarily against them, simply ignoring the law.

Unfortunately, the pro-family establishment in Britain (like much of the US and other places) has been unable to stem the tide – much less take back any ground.

On one hand, the forces of the Left, particularly the LGBT movement, are well-organized across the country and in virtually every venue of government, business, and other institutions. And they are extremely ruthless in the enforcement of their ideology.

Ofsted is the commission that polices all schools in Britain -- public and private -- to make sure they are teaching official "British values" or risk being closed down. This is an actual example of what British Values now entails, mandated by the government.

On the other hand, the British people in general do not have a tradition of confronting their authorities or demanding their rights, but rather politely register their disagreement and scrupulously cooperate within the bounds of the laws, regulations, and orders. This makes for a well-ordered society in normal times. But it does not make for a good counter-revolution when oppression and tyranny arise. There’s also a widespread feeling of inevitability, that positive change is not possible.

On the positive side, the pro-family leaders in Britain are much more astute and well-informed than their counterparts in the US about the true nature of the “culture war” and its political and ideological roots. They know very well what they’re up against. And they’re very dedicated. The Christian pro-bono lawyers in particular are unwavering against an extremely difficult and hostile legal environment – and they often win cases defending street preachers and wronged employees seemingly by force of will!

But the aggressive tactics and strategies needed to effectively fight back, and the means to fire up and mobilize the people, are not yet part of the pro-family fabric in the UK.

MassResistance comes to fill in the activism gap

That’s where MassResistance UK hopes to help. Many activists in Britain feel that the methods, tactics, and especially the positive attitude and mindset that MassResistance has successfully used over the last two decades is a missing link to that is desperately needed in the UK. Moreover, people are sensing that underneath the surface a huge but largely silent anger has been boiling up and is crying out to be properly channeled.

For the last several months, a core group of UK pro-family activists has been steadily meeting, planning, and working to form a strong MR-UK chapter and bring the MassResistance brand of activism to Britain. They brought people together from across the country. 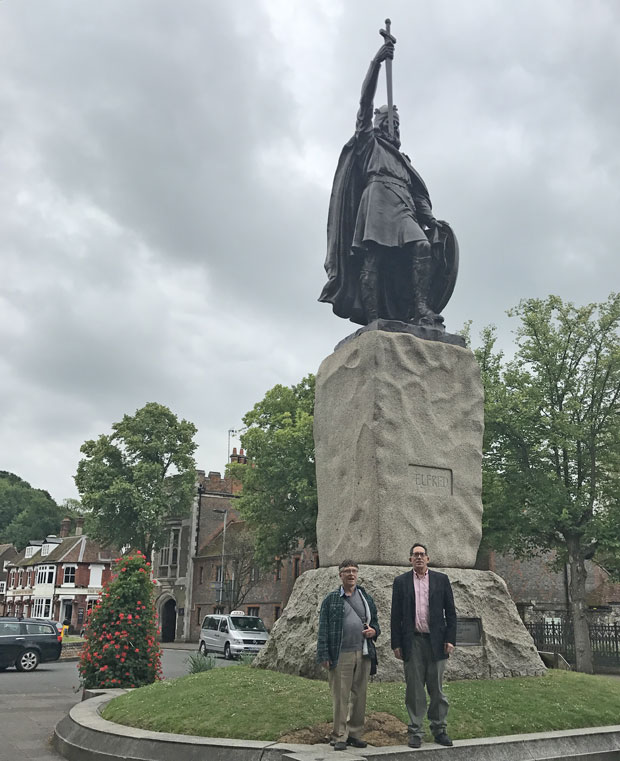 Brian Camenker (right) and David Skinner, a leader of MassResistance UK, at the statue of King Alfred in Winchester, England. Alfred is considered the greatest English king of all time.

The new movement in UK gets started

Camenker’s MassResistance-UK trip included a number of important events and activities: (More details of these in upcoming posts.)

1. Meetings with key UK leaders and activists. On July 1, Camenker addressed a meeting in Salisbury (organized as a garden party) with about 50 UK pro-family leaders and activists. They heard our approach and they talked about what they are doing. It was very productive. Later, in London, Camenker met with the people at Christian Concern, a leading UK pro-family and legal defense group.

2. Major strategy and planning retreat. Our side has rarely set aside large blocks of time to carefully think and strategize on winning the culture war – not just “fighting” it, but winning it. For three full days Camenker and various key activists and political operatives – not just theorists, but people who’ve fought the battles – from across the UK met at a retreat in Bournemouth, a city on the southwest coast of England. What came out of this was quite powerful.

3. MassResistance-UK kickoff meeting in London. On July 7, over 60 committed activists from across the UK came to London for this meeting. There were speeches by several pro-family leaders. Camenker outlined the plan and strategies to bring the UK into the fight. People brought up specific battles to be addressed.

Camenker (standing at podium) addresses a group of activists in London. Seated onstage with him are various pro-family leaders.
4. London Gay Pride Parade. By coincidence, the London Gay Pride Parade was on the following day, so we dropped by. It is a mammoth event – possibly the largest “gay” parade in the world in terms of number of participants. But it was different from any other “Gay Pride” parade we’ve seen. It wasn’t as overtly obscene or depraved like others – though there was a big transgender presence and plenty of sado-masochist imagery. Instead, the focus was very intense with intense emotionally driven ideological messages, essentially transforming the “LGBT movement” into a bizarre “religion” or cult. (Anyone who’s ever seen films of the Nuremberg Nazi rallies in the 1930s would recognize the fervor we saw.)
Juxtaposed with that, skilled MR-UK activists also came to engage individuals on the other side with the truth. That was quite moving. Several on the LGBT side didn’t want to leave once they started discussing their problems and traumas with our people. A few of them broke down and almost cried.

Also, an important appearance at the national Anglican General Synod. On July 8, Dr. Robert Oscar Lopez, the leader of Texas MassResistance, gave a stirring speech at the Anglican General Synod in York, England, brought in by a major UK pro-family group. He was opposing the Church’s proposal to ban therapy for youth on sexual-orientation issues. The state of the Church of England unbelievable. The Church passed the ban, and also passed a resolution to “affirm” transgenderism and to consider 'liturgical materials' to “mark a person's gender transition”! (More on this in an upcoming report.) There’s a lot of work to do, but at least MassResistance was there fighting.

The MassResistance-UK movement is off and running! The core MR-UK group is working on its first nationwide activism project. A lot of people are excited about taking on the “culture war” rather than just reacting to it. We will keep you informed on their progress! 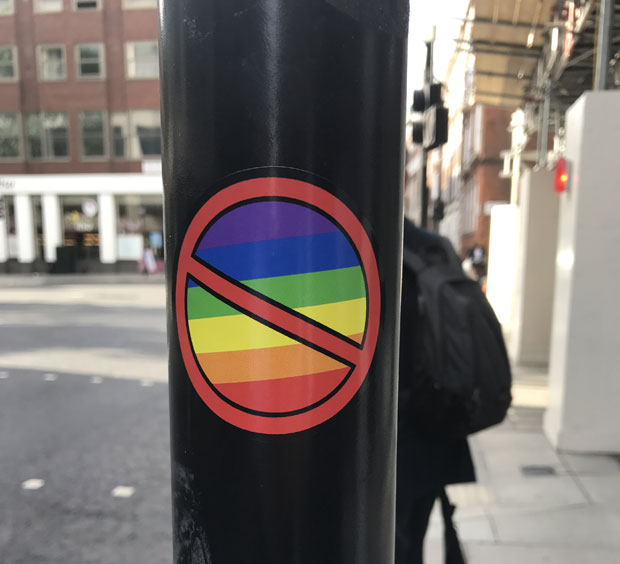 What a coincidence! On the day of the Gay Pride Parade, MassResistance "no rainbow" stickers were spotted on utility poles in downtown London!