More WINNING: George "Anti-Trump" Lopez Blocked Me on Twitter, Too!

The liberal loonies who think that they are leading lights in the anti-Trump movement can't take the heat.

They are so easy to troll.

They are so easy to shame.
Finally, they are getting a taste of their own medicine, and they don't like it.

Liberal professor in name only Robert Reich blocked me on Twitter some time ago. He had no interest in discussing real issues. All he wants to do is serve as a Bernie-crat puppet who does what they Communist Manifesto tells him to, provided that he softens the hard-core Red Scare image with a little blue-like socialism.

Not working. Not any more.

Then there's George Lopez. This man is not funny.

Not anymore, anyway. Ever since he was afflicted with Trump Derangement Syndrome, Lopez has lost his charm and wit, only to turn into a hollow ranter filled with racist banter.

I called him out on his failed racism, too. 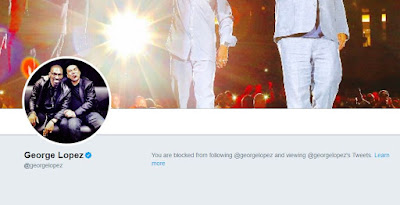 Posted by Arthur Christopher Schaper at 9:19 AM